The Bystander Effect and Altruism 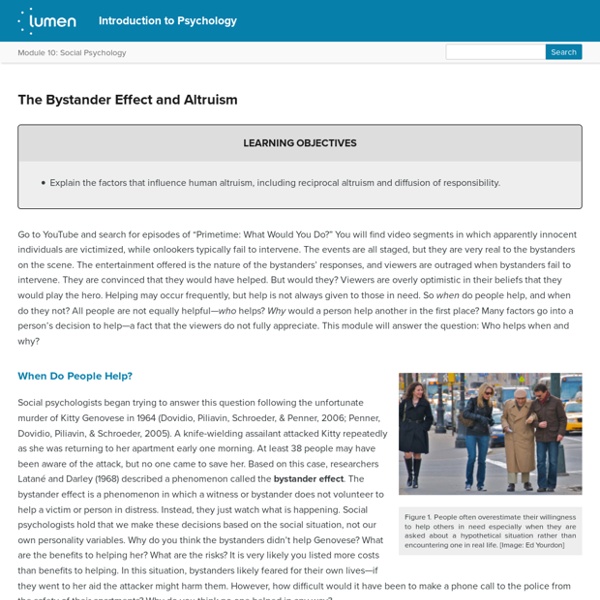 Learning Objectives Explain the factors that influence human altruism, including reciprocal altruism and diffusion of responsibility. Go to YouTube and search for episodes of “Primetime: What Would You Do?” You will find video segments in which apparently innocent individuals are victimized, while onlookers typically fail to intervene. The events are all staged, but they are very real to the bystanders on the scene. The entertainment offered is the nature of the bystanders’ responses, and viewers are outraged when bystanders fail to intervene. Figure 1. When Do People Help? Social psychologists began trying to answer this question following the unfortunate murder of Kitty Genovese in 1964 (Dovidio, Piliavin, Schroeder, & Penner, 2006; Penner, Dovidio, Piliavin, & Schroeder, 2005). More recently, in 2010, Hugo Alfredo Tale-Yax was stabbed when he apparently tried to intervene in an argument between a man and woman. Defining the situation: The role of pluralistic ignorance Figure 2.

5 Effective Tips to Overcome the Bystander Effect Do you know about the bystander effect? It's a social dynamic that affects almost everyone when an observed conflict is either ignored or worse, reinforced by the failure to act by those observing. An example of this would be a number of people in a park observing a man trying to take a woman's purse, yet doing nothing to report the crime or to deter the criminal by drawing attention to their actions. The sad fact is that most of us are vulnerable to this condition of non-action; but fortunately, there are things you can do to negate or minimize the impact. Here are a few tips for overcoming the bystander effect. 1.

We Are All Bystanders For more than 40 years, Peggy Kirihara has felt guilty about Stewart. Peggy liked Stewart. They went to high school together. Their fathers were friends, both farmers in California’s Central Valley, and Peggy would always say “hi” when she passed Stewart in the hall. Yet every day when Stewart boarded their school bus, a couple of boys would tease him mercilessly. The Bystander Effect is about more than the diffusion of responsibility Inspired by the shocking murder of a woman in New York in 1964, reportedly in front of numerous witnesses who did nothing to help (although this was exaggerated), the Bystander Effect is a well-researched phenomenon that describes the diminishing likelihood that any one person will help as the number of other people available to help increases. The most popular and widely researched explanation is that people experience a diffusion of responsibility when in the company of other bystanders. We don’t help the person who is being assaulted in a busy street because we assume that someone else will. But a new study in the Journal of Experimental Psychology: General provides evidence that there is much more to it than this – in particular, when deciding whether to help, we take into account the perspective of the other bystanders – whether they know that help is needed, whether they know that we know that help is needed, whether they know that we know they know that help is needed, and so on.

Reducing the Bystander Effect As discussed, there are a number of factors that magnify the Bystander Effect. Fortunately, there are also a number of factors that weaken it. Once again, factors can be divided into characteristics of the situation, and of the people. Remembering Ilan Halimi The murder of four people in the Hyper Cacher kosher store in Paris in January 2015 served as a wake-up call to Europe and much of the world what French Jews had known for a long time: European antisemitism was back, and with a vengeance. This attack, coming on the heels of the Charlie Hebdo atrocity, could no longer be ignored. The vicious hatred for Jews that had been bubbling just under the surface among Europe's Islamist extremists—not to mention the far-right and far-left political fringes—had boiled over. From the beginning of the 2000s, while the Second Intifada was raging, France saw a worrying and rapid rise in public expressions of prejudice and violence against Jews. Anti-Zionism became an excuse to openly express hatred against the Jewish community. Halimi was a 23-year-old French Jew who worked as a salesman in a Paris cell phone store.

Bystander Effect: What Is It and What You Can Do About It What the bystander effect looks like A little after 3 a.m. on March 13, 1964, Catherine “Kitty” Genovese parked her car and walked to her apartment in Queens, New York, after finishing her shift as a bar manager. Serial killer Winston Moseley was out to victimize someone that night. Genovese became his target. Why we still look away: Kitty Genovese, James Bulger and the bystander effect More than half a century later, the death of Kitty Genovese continues to remind us of the disconnect between what we believe about ourselves and how we really act under pressure. The murder of the 28-year-old outside her apartment in the Queens neighborhood of Kew Gardens in the early morning of 13 March 1964 rippled through New York City and around the world. How could a young, independent woman who lived on her own terms be so easily struck down? How could so many neighbors look on and turn away as she was stabbed repeatedly on the street and in her apartment building? What did that collective inability to act reveal about ourselves, our communities, and our belief systems?