Federal government puts polar briefings on ice. Federal scientists who keep a close eye on the Arctic ice would like to routinely brief Canadians about extraordinary events unfolding in the North. 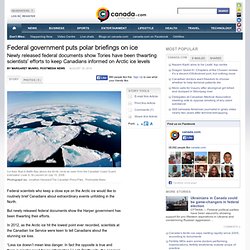 But newly released federal documents show the Harper government has been thwarting their efforts. In 2012, as the Arctic ice hit the lowest point ever recorded, scientists at the Canadian Ice Service were keen to tell Canadians about the stunning ice loss. “Less ice doesn’t mean less danger. In fact the opposite is true and there is greater need for ice information,” Leah Braithwaite, the service’s chief of applied science said in an August 2012 memo to Norman Naylor, a strategic communications adviser at Environment Canada. Braithwaite and her colleagues — aware of the national and international interest in the shrinking polar ice — wanted to hold a “strictly factual” technical briefing for the media to inform Canadians how the ice had disappeared from not only the Northwest Passage but many normally ice-choked parts of the Arctic. 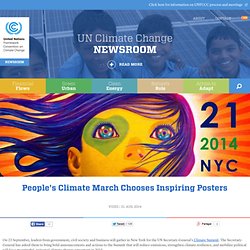 The Secretary-General has asked them to bring bold announcements and actions to the Summit that will reduce emissions, strengthen climate resilience, and mobilize political will for a meaningful, universal climate change agreement in 2015. Steady increase in flights will outweigh carbon cuts. Climate News Network The aviation industry insists that it is making only a tiny contribution to global warming, with just 2 percent of global carbon dioxide emissions coming from its aircraft. 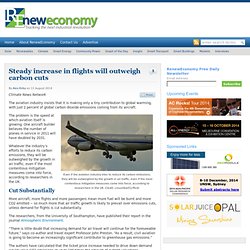 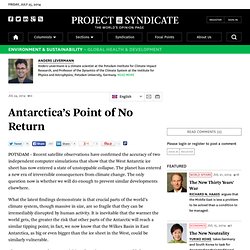 Click to hide this space POTSDAM – Recent satellite observations have confirmed the accuracy of two independent computer simulations that show that the West Antarctic ice sheet has now entered a state of unstoppable collapse. The planet has entered a new era of irreversible consequences from climate change. The only question now is whether we will do enough to prevent similar developments elsewhere. What the latest findings demonstrate is that crucial parts of the world’s climate system, though massive in size, are so fragile that they can be irremediably disrupted by human activity. There are not many human activities whose impact can reasonably be predicted decades, centuries, or even millennia in advance. Lessons for Climate Change in the 2008 Recession. 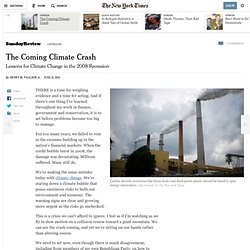 And if there’s one thing I’ve learned throughout my work in finance, government and conservation, it is to act before problems become too big to manage. In Precedent-Setting Case, Insurance Company Sues Chicago Over Climate Change. This is an archived story. 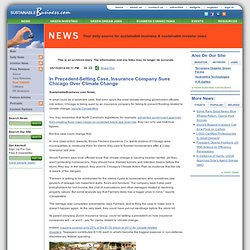 The information and any links may no longer be accurate. In what could be a landmark case, that even spurs the most climate-denying government officials into action, Chicago is being sued by an insurance company for failing to prevent flooding related to climate change, reports ClimateWire. You may remember that North Carolina's legislature, for example, prevented government agencies from creating flood maps based on projected future sea level rise, they can only use historical figures. But this case could change that. In nine class-action lawsuits, Illinois Farmers Insurance Co. wants dozens of Chicago-area municipalities to reimburse them for claims they paid to flooded homeowners after a 2-day downpour last year. Illinois Farmers says local officials know that climate change is causing heavier rainfall, yet they aren't protecting homeowners. The damage was completely preventable, says Farmers, and is filing the case to make sure it doesn't happen again.

Svenrgy : Kennelijk is onze Economie... Guardianeco : How temperatures in America... How temperatures in America changed over two decades – big picture. Stanford-to-purge-18-billion-endowment-of-coal-stock. Photo announced Tuesday that it would divest its $18.7 billion endowment of stock in coal-mining companies, becoming the first major university to lend support to a nationwide campaign to purge endowments and pension funds of fossil fuel investments. 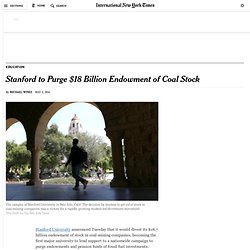 The university said it acted in accordance with internal guidelines that allow its trustees to consider whether “corporate policies or practices create substantial social injury” when choosing investments. Coal’s status as a major source of carbon pollution linked to persuaded the trustees to remove companies “whose principal business is coal” from their investment portfolio, the university said. Stanford’s associate vice president for communications, Lisa Lapin, said the decision covers about 100 companies worldwide that derive the majority of their revenue from coal extraction. Not all of those companies are in the university’s investment portfolio, whose structure is private, she said. Among other deciding factors, Ms. Ms. Commonwealth Club-Climate One by The Commonwealth Club/Climate One. Cnet. All four of the big wireless operators want to keep their iPhone-loving existing subscribers, as well as win over some new ones. 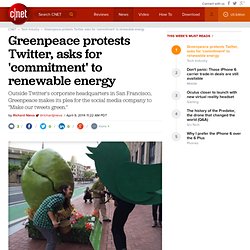 In an effort to do this, they are each offering trade-in programs that are guaranteeing customers who trade in their older iPhones much better values for a limited time than are currently being offered from many of the third-party trade-in sites, like Gazelle and Nextworth. Climate change impacts in pictures: 8 stark IPCC images. Climate Central With 30 chapters that cite more than 12,000 scientific papers and reports, there’s a lot of material — and a lot of words — in the newly released Intergovernmental Panel on Climate Change report looking at the impacts of global warming. 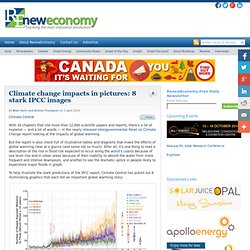 But the report is also chock full of illustrative tables and diagrams that make the effects of global warming clear at a glance (and some not so much). After all, it’s one thing to read a description of the rise in flood risk expected to occur along the world’s coasts because of sea level rise and in urban areas because of their inability to absorb the water from more frequent and intense downpours, and another to see the dramatic uptick in people likely to experience major floods in graph. Renewable Energy Is About To Boom. Attention grows on unburnable carbon risk in EU. Quote of the Day: I'm skeptical of skeptics. Stuartcmcgill : 97% say bridge is safe. Will... Publication:- World Energy Outlook Special Report 2013: Redrawing the Energy Climate Map.

Governments have decided collectively that the world needs to limit the average global temperature increase to no more than 2°C and international negotiations are engaged to that end. 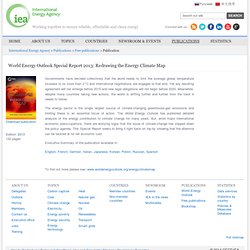 Yet any resulting agreement will not emerge before 2015 and new legal obligations will not begin before 2020. Meanwhile, despite many countries taking new actions, the world is drifting further and further from the track it needs to follow. First Energy Bows to Shareholder Pressure to Cut Emissions. January 15, 2014 Utility FirstEnergy, one of the largest emitters of greenhouse gases in the US, has responded to shareholder demands and agreed to reduce its carbon emissions, the New York Times reports.

The company — the eighth-biggest emitter of greenhouse gases in the US according to the Greenhouse 100 index — says it will study and report on what it can do to meet President Barack Obama’s goal of reducing carbon emissions by 80 percent by 2050. Wij Willen Actie. Wij Willen Actie. SolarWebsite : Ik vind deze al langer bestaande... Microsoft, Owens Corning Join Climate Declaration. Microsoft, Owens Corning, Diageo, Thornton Tomasetti and Acer America have signed the Climate Declaration, calling on US policymakers to enact climate and clean energy policies that will benefit the economy.

These five global companies, all with more than 100,000 employees, join more than 650 other companies including General Motors, Unilever and Levi Strauss, in supporting the campaign organized by Ceres and its business network BICEP (Business for Innovative Climate and Energy Policy), which calls climate change “one of America’s greatest economic opportunities of the 21st century.” Today’s announcement comes just days before the launch of Climate Week NYC 2013 and the release of the Intergovernmental Panel on Climate Change’s fifth climate science assessment.

All of the signatories announced today say they’re integrating low-carbon practices into their operations and products. Business vs business: The real climate battle begins. This is where it gets really interesting. Since I first engaged in the climate debate in the late 1980’s it’s all been fairly slow and predictable.

Environmentalists argued for action, big business resisted and government acted as the referee, deciding the policy winners. Climate action is better for the economy. Given that Australia’s federal election is all about the economy, and conflicting policies on climate change, a new posting by Skeptical Science is timely. It addresses they myth that CO2 limits will damage economic growth. It says that not making serious efforts to curb emissions will incur serious economic costs, a conclusion made by numerous studies, including Ross Garnaut’s, but one that has yet to register in the Australian political debate circa 2013.”

Obama: No time for 'flat-earth society' on climate change. Mayor Bloomberg Announces Major Plan to Battle Climate Change in New York City. In the wake of last year’s Superstorm Sandy, and in preparation for an even more turbulent hurricane season, Mayor Bloomberg spoke today on safeguarding New York City from future climate change issues. Bloomberg proposed a mix of surge protecting measures, like flood walls, levees and dunes to keep unwanted water out during impending storms, in addition to providing funding for property owners to flood-proof their buildings. Bloomberg’s proposals will cost around $15-20 billion, of which $10 billion has already been accounted for from Sandy relief. The city will have to pony up an additional $5 billion, but Bloomberg hopes to secure this from federal funds. The ambitious plan will include removable flood walls for lower Manhattan, and a levee for Staten Island and Brooklyn, in addition to flood gates.

Cherry-picking one survey to discredit a survey of scientists on climate change. File photo of smoke from a bush fire on the outskirts of Labertouche, 56 miles east of Melbourne, Australia, on Feb. 7, 2009, after a "once in a century" heat wave sparked dozens of blazes across the country. How the White House thinks about climate change, in 7 charts. The latest Economic Report of the President (pdf) has a whole chapter on energy and climate change that's worth reading as a window into how the White House thinks about the topic. IMF Chief: 'Unless We Take Action On Climate Change, Future Generations Will Be Roasted, Toasted, Fried And Grilled'

Default. Soot is ‘Second Largest’ Human Influence on Climate Change. Soot is the second largest man-made contributor to global warming and its influence on climate has been greatly underestimated, according to the first quantitative analysis of this issue, published in the Journal of Geophysical Research: Atmospheres. The findings show that soot, also called black carbon, has a warming effect of about 1.1 watts per square meter, around two-thirds of the effect of the largest man-made contributor to global warming, carbon dioxide.

Most Vulnerable, Least Culpable. Autonomous adaptation to climate change by shrimp and catfish farmers in Vietnam’s Mekong River delta. Is the World Bank turning up the heat? - Inside Story Americas. Extreme heat waves, declining food stocks, and a life-threatening sea level rise: it's a sobering vision of the future by one of the world's largest and most powerful institutions. A report issued by the World Bank earlier this month warns of severe consequences if global warming is not dealt with. New Global Assessment Reveals Nearly 1,200 Proposed Coal-Fired Power Plants. Coal-fired power plants are a major source of greenhouse gas emissions—one that could be increasing significantly globally, according to new analysis from the World Resources Institute. Climate change: the truth will out. I am in a state of shock and feeling low, but the last thing I want is for someone to try to cheer me up.

Why one 16-year-old is sueing the US government over climate change. Open source, open data, climate, energy and collaboration.