Reddit’s science forum banned climate deniers. Why don’t all newspapers do the same? In addition to my career as a PhD chemist, I am one of a select few who enjoy the privilege of moderating content on reddit.com’s science forum. 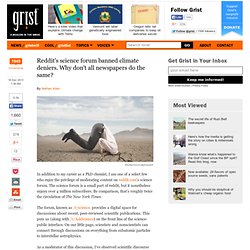 The science forum is a small part of reddit, but it nonetheless enjoys over 4 million subscribers. By comparison, that’s roughly twice the circulation of The New York Times. The forum, known as /r/science, provides a digital space for discussions about recent, peer-reviewed scientific publications. This puts us (along with /r/AskScience) on the front line of the science-public interface. On our little page, scientists and nonscientists can connect through discussions on everything from subatomic particles to interstellar astrophysics.

As a moderator of this discussion, I’ve observed scientific discourse across a wide variety of disciplines. Given that our users are mainly academics (and all are nerds), the discussion generally resembles any scientific debate. Some issues, however, are particularly contentious. 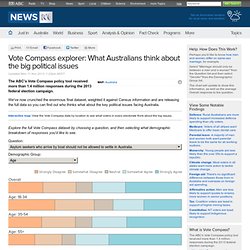 We've now crunched the enormous final dataset, weighted it against Census information and are releasing the full data so you can find out who thinks what about the key political issues facing Australia. Interactive map: View the Vote Compass data by location to see what voters in every electorate think about the big issues. Explore the full Vote Compass dataset by choosing a question, and then selecting what demographic breakdown of responses you'd like to see. Issues Final Report Share this data: What is this? When Prime Minister Kevin Rudd called the federal election for September 7, the ABC immediately launched Vote Compass. By election day, we had received more than 1.4 million responses, as people used the tool to see how their views compared to the parties' policies. After weighting, the effective sample size is 573,444. 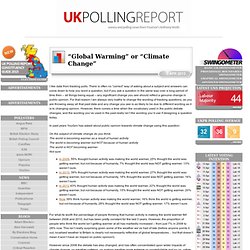 There is often no “correct” way of asking about a subject and answers can come down to how you word a question, but if you ask a question in the same way over a long period of time then – all things being equal – any significant change you see should reflect a genuine change in public opinion. For that reason I am always very loathe to change the wording of tracking questions, as you are throwing away all that past data and any change you see is as likely to be due to different wording as it is to changing opinion.

However, there comes a time when the vocabulary used in the public debate changes, and the wording you’ve used in the past really isn’t the wording you’d use if designing a question today. In past years YouGov has asked about public opinion towards climate change using this question: Global-Warming Denial Hits a 6-Year High. Fox News on the morning of September 27, 2013, covering the new IPPC report on climate change.Media Matters/Fox News The latest data is out on the prevalence of global warming denial among the US public. 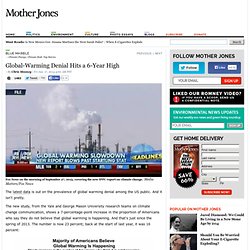 And it isn't pretty. The new study, from the Yale and George Mason University research teams on climate change communication, shows a 7-percentage-point increase in the proportion of Americans who say they do not believe that global warming is happening. And that's just since the spring of 2013. Climate Arguments Flowchart. RealClimate.org. Global Warming and Climate Change skepticism examined.

Victory at Hand for the Climate Movement? There are signs the climate movement could be on the verge of a remarkable and surprising victory. To understand this incredible potential we first have to step back and understand the unique structure of this social change movement, which may rank among the most influential in history. It is simplistic to characterise it as an alliance of grass roots organisations and activists pitched against a rich and well connected adversary. Is that it? Most definitely not. Climate Action Tracker. In the 70s, they said there'd be an Ice Age. Climate LiteracyAbout Teaching Climate Literacy Climate information can be used to reduce vulnerabilities or enhance the resilience of communities and ecosystems affected by climate change. 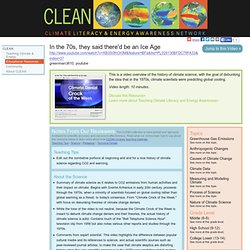