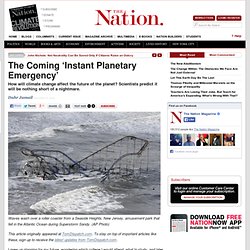 (AP Photo) This article originally appeared at TomDispatch.com. To stay on top of important articles like these, sign up to receive the latest updates from TomDispatch.com. I grew up planning for my future, wondering which college I would attend, what to study, and later on, where to work, which articles to write, what my next book might be, how to pay a mortgage, and which mountaineering trip I might like to take next. This Is Probably The Funniest, Most Effective Way To Deal With People Who Ignore Science Facts Ever. 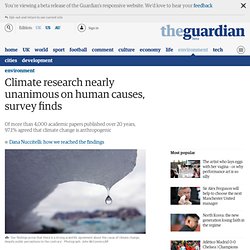 Authors of the survey, published on Thursday in the journal Environmental Research Letters, said the finding of near unanimity provided a powerful rebuttal to climate contrarians who insist the science of climate change remains unsettled. The survey considered the work of some 29,000 scientists published in 11,994 academic papers. A grand solar minimum would barely make a dent in human-caused global warming. Posted on 14 August 2013 by dana1981 The Maunder Minimum was a period of very low solar activity between 1645 and 1715, and the Dalton Minimum was a period of low (but not as low as the Maunder Minimum) solar activity between 1790 and 1830. 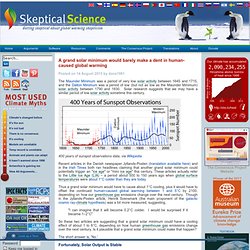 Solar research suggests that we may have a similar period of low solar activity sometime this century. 400 years of sunspot observations data, via Wikipedia Recent articles in the Danish newspaper Jyllands-Posten (translation available here) and in the Irish Times both ran headlines claiming that another grand solar minimum could potentially trigger an "ice age" or "mini ice age" this century. These articles actually refer to the Little Ice Age (LIA) – a period about 500 to 150 years ago when global surface temperatures were about 1°C colder than they are today. IPCC Third Assessment Report - Climate Change 2001 - Complete online versions. Jasper Kirkby: The CLOUD experiment at CERN. The great global warming swindle - Full version. Burtrutan/downloads/EngrCritiqueCAGW-v4o3.pdf. Carbon Omissions: how the UK outsourced its carbon footprint – video animation. Do the Math - The Movie. Food and climate change: the forgotten link. Climate change endangers food security in Himalayan communities such as Dunche, in Nepal’s Rasuwa District. 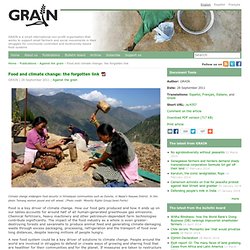 In this photo Tamang women pound and sift wheat. (Photo credit: Minority Rights Group/Jared Ferrie) Food is a key driver of climate change. How our food gets produced and how it ends up on our tables accounts for around half of all human-generated greenhouse gas emissions. Chemical fertilizers, heavy machinery and other petroleum-dependant farm technologies contribute significantly.

A new food system could be a key driver of solutions to climate change. Most studies put the contribution of agricultural emissions – the emissions produced on the farm - at somewhere between 11 and 15% of all global emissions.[1] What often goes unsaid, however, is that most of these emissions are generated by industrial farming practices that rely on chemical (nitrogen) fertilizers, heavy machinery run on petrol, and highly concentrated industrial livestock operations that pump out methane waste.

n85re.AuSt.79.jpg (620×413) Arctic Sea Ice: What, Why and What Next. On September 19th, NSIDC, the National Snow and Ice Data Center, announced that Arctic sea ice has shrunk as far as it will shrink this summer, and that the ice is beginning to reform, expanding the floating ice cap that covers the North Pole and the seas around it. 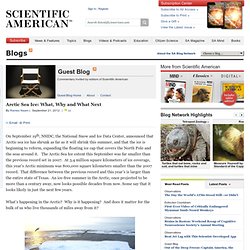 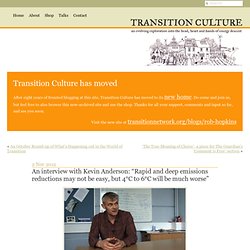 He will be giving the annual Cabot Institute lecture, ‘Real Clothes for the Emperor’ on 6th November in Bristol, which has already sold out. I was hoping to be able to go and report on it for you here, but no longer can, so instead, I spoke to Kevin last week, by Skype. How to Make Alternative Energy. Www.iisd.org/pdf/2009/rising_temps_middle_east.pdf.