Hillary Clinton Protected from Testifying About Email Server After SCOTUS Rejects Case. Hidden CIA Assassination Documents. A journalist filed a Freedom of Information Act Request in 2015 requesting documents about CIA assassinations, and may finally get the documents soon. 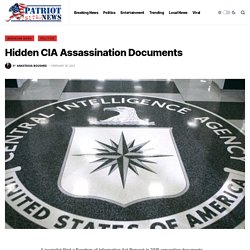 FOIA Request The FOIA Request, filed by J.M. Porup on May 1, 2015, asked the CIA for “any and all documents relating to CIA use of poison for covert assassinations.” According to left-wing news outlet Vice, ” The CIA responded to the request on May 21, 2015 and made clear it hadn’t even bothered to search its records for an answer to the question, suggesting that because assassinating people is illegal, it simply wouldn’t have documents on it.”

Remove Content Link? Please choose a reason below: In their response, the CIA never actually denied that the agency engaged in the act of using poison for assassinations, they simply explained that the activity is illegal. Executive Order 12333 reads: “No person employed by or acting on behalf of the United States Government shall engage in, or conspire to engage in, assassination.” Supreme Court turns its back on Trump. The Supreme Court on Monday declined to review a series of challenges by Pennsylvania Republicans to the state’s expansive mail voting policy. 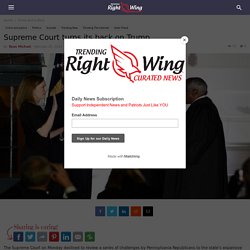 The development marked long-deferred action on the pro-Trump litigation that was filed in the heat of the 2020 election and had sought to upend President Biden’s victory in the key battleground state. Trump’s Supreme Court picks turn their backs on him Three of the court’s more conservative justices — Clarence Thomas, Samuel Alito and Neil Gorsuch — dissented from the court’s denial of review in a pair of cases, though the justices made clear they had no desire to disturb the election result. Two petitions that the court turned down Monday concerned GOP bids to invalidate Pennsylvania’s extended mail ballot due date. The lawsuits claimed that Pennsylvania’s policy of accepting timely sent ballots that arrived up to three days after Election Day was unlawful. Biden's Puppet Masters Revealed. Over 150 of America’s most senior corporate executives came crawling out of the Deep State shadows to pledge allegiance to Imperial Leader Joe Biden. 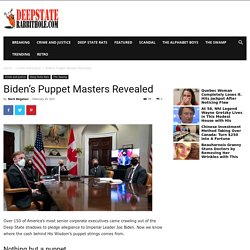 Now we know where the cash behind His Wisdom’s puppet strings comes from. Nothing but a puppet Joe Biden is just another Pinocchio except there’s no easy way to tell when he’s lying. THE TRILATERAL COMMISSION AND THE NEW WORLD ORDER. (Copies of this article in pamphlet form are available from Renaissance Bookservice:P.O.Box 2451:Riverside:CA:92516:$1.75 per copy postpaid. 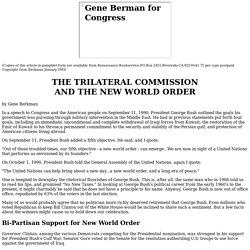 Copyright Gene Berkman January,1993) by Gene Berkman In a speech to Congress and the American people on September 11, 1990, President George Bush outlined the goals his government was pursuing through military intervention in the Middle East. He had in previous statements put forth four goals, including an immediate, unconditional and complete withdrawal of Iraqi forces from Kuwait; the restoration of the Emir of Kuwait to his throne;a permanent commitment to the security and stability of the Persian gulf; and protection of American citizens living abroad.

On September 11, President Bush added a fifth objective. "Out of these troubled times, our fifth objective - a new world order - can emerge...We are now in sight of a United Nations that performs as envisioned by its founders. " Council on Foreign Relations. 6 Secret Societies American Presidents Have Belonged To. We love stories about secret societies—just look at The Da Vinci Code. 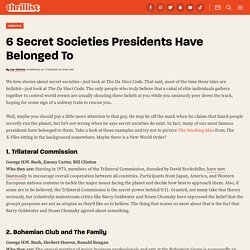 That said, most of the time these tales are bullshit—just look at The Da Vinci Code. The only people who truly believe that a cabal of elite individuals gathers together to control world events are usually shouting these beliefs at you while you anxiously peer down the track, hoping for some sign of a subway train to rescue you. Well, maybe you should pay a little more attention to that guy. He may be off the mark when he claims that lizard people secretly run the planet, but he's not wrong when he says secret societies do exist.

Deep State Behind the Deep State: CFR, Trilaterals, Bilderbergs - The New American. Despite generally claiming to be part of discussion groups, members of globalist, anti-American groups occasionally tell what they are really up to — and it’s not good for us. 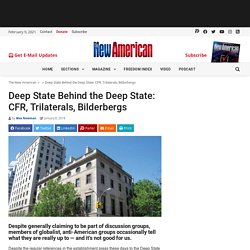 Other powerful elements are practically invisible: Secret societies such as Skull and Bones and the Bohemian Grove, for example, which are described here. 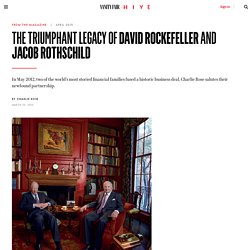 Two lions in winter, they have known each other for 50 years; they have also had parallel lives, growing up on grand estates and surrounded by an abundance of art, ancestors, and siblings. David went to Harvard and the London School of Economics and earned a Ph.D. from the University of Chicago. Jacob graduated from Eton and Oxford. They both jumped into careers in finance. The deal is simple. I suspect it is in philanthropy and art preservation that these two new partners will be acclaimed: David, of course, for the Rockefeller Brothers Fund and the Museum of Modern Art (where his mother, Abby Aldrich Rockefeller, played such a prominent role); Jacob, meanwhile, as chairman of the board of trustees of the National Gallery, the National Heritage Memorial Fund, and the Heritage Lottery Fund. 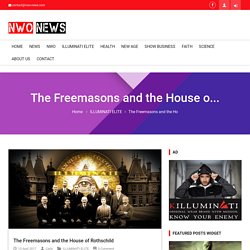 Hamilton was one of many Founding Fathers who were Freemasons. He had close relations with the Rothschild family which owns the Bank of England and leads the European Freemason movement. George Washington, Benjamin Franklin, John Jay, Ethan Allen, Samuel Adams, Patrick Henry, John Brown and Roger Sherman were all Masons. Andrew Hamilton. Rothschild Conspiracy: Do They Rule The World? - Conspiracies.net. An Introduction to the Rothschild Conspiracy The name Rothschild is literally associated with wealth. 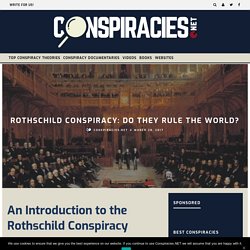 For over 200 years, the Rothschild family have remained the most powerful and wealthy family in the world. Their wealth has been made primarily in the world of banking. Rothschild & Rockefeller — Trillionaires of the World. Letter written from London by the Rothschilds to their New York agents introducing their banking method into America: “The few who can understand the system will be either so interested in its profits, or so dependent on its favors, that there will be no opposition from that class, while, on the other hand, that great body of people, mentally incapable of comprehending the tremendous advantage that Capital derives from the system, will bear its burden without complaint and, perhaps, without even suspecting that the system is inimical to their interests.” 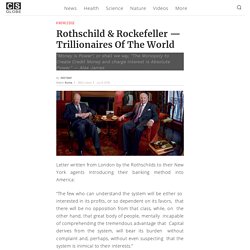 THE TRUE POWER BEHIND BOTH THE ROCKEFELLER AND ROTHSCHILD FAMILIES. By: The Unhived Mind Yeah, even researchers like Daniel Estulin admit the likes of Rockefeller are way down the totem pole. He mentions House of Braganza as being one of the richest. These are the people that have all the natural minerals in the world, are they not? Idiots on YouTube saying the Rothschilds have $400 trillion, idiots! Printing money is not the real power; controlling resources is! I wonder what level you have to get to before you are told who your masters are? Does Adolofo Nicholas take orders from these criminals?

The Federal Reserve Cartel: The Rothschild, Rockefeller and Morgan Families - The Event Chronicle. Part One: The Banking Houses of Morgan and Rockefeller The Four Horsemen of Banking (Bank of America, JP Morgan Chase, Citigroup and Wells Fargo) own the Four Horsemen of Oil (Exxon Mobil, Royal Dutch/Shell, BP and Chevron Texaco); in tandem with Deutsche Bank, BNP, Barclays and other European old money behemoths. Reduced Expectations & Bio-Techno-Feudalism: Part Of The Great Reset » Sons of Liberty Media. We’ve been reporting on The Great Reset for some time and as The New American’s Alex Newman told me on The Sons of Liberty radio show, it’s not just about a financial reset, but will include a full reset of everything in society.

Now, author Michael Rectenwald is putting together a multi-part series on these various aspects of The Great Reset. Rectenwald writes at Mises.org: The Great Reset is on everyone’s mind, whether everyone knows it or not. Details: Obama's Deep State Pushes to Continue Malicious Activity Against Americans - Deep State Rabbit Hole.

We still don’t know which particular Deep State rats in Barack Obama’s NSA, FBI and DOJ were selling access to the U.S. Intelligence database like it was a super-duper version of Google search, but the latest revelation is that Christopher Wray wants to keep doing it. 911 Services Go Dark...Did the Deep State Just Test Their Abilities Ahead of Elections? - Deep State Rabbit Hole. In separate incidents across fourteen states on Monday, 911 services were down. The Deep State is REAL… Trump Enemy Finally Admits It - Quick News Updates. If you ever doubted there was a deep state in this country, you are about to hear all the evidence you will ever need.

Documentation has existed since at least the 1700s about secret societies formed to control governments. Even now in America, such societies attract rich and connected people. JFK assassination plot REVEALED: ‘Shock plan by secret society’ Notorious fraternity club Skull and Bones contains powerful members and mysterious rituals but has long been associated with sinister conspiracy theories. Powerful and important figures have been Skull and Bones members, from former US President George W. Bush to individuals in intelligence agencies and the financial sector.

Deep State: Follow the Rothschild, Soros, and Rockefeller Money. With almost unlimited capital, Wall Street moneymen use it to centralize government. Their plans smack of worldwide crony capitalism, with government rules made to order. (109) FALL OF CABAL AWARD WINNING FULL VIRAL DOCUMENTARY by Janet Ossebaard. The Deep State Is A Very Real Thing.

'This is a coup attempt': Giuliani says he believes in 'deep state' Man Wearing MAGA Hat Confronts Schiff: ‘What Will You Do When the Deep State Can’t Protect You Anymore?’ Fired Navy secretary pens op-ed proving deep state is alive and well in DC. Paul Krugman Praises "The Deep State" Explains Why "Trump Hates It So Much" Deep State Holmes Won ‘Dissent’ Award, Was Fixture in Obama Administration. Democrats continue to conspire with Deep State to defeat Trump.