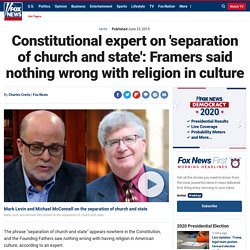 Top 10 Ways Obama Violated the Constitution during His Presidency. This is all a world away from candidate Obama, who said this on the campaign trail in 2008: “The biggest problems that we’re facing right now have to do with George Bush trying to bring more and more power into the executive branch and not go through Congress at all. 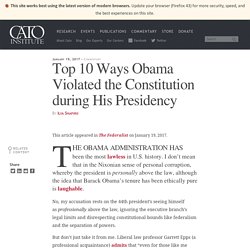 And that’s what I intend to reverse when I’m president.” As George Mason law professor David Bernstein quipped, foolish voters thought that Obama was taking issue with the imperial presidency, when really he was only complaining that the wrong man occupied the throne. How Obama Ignored Constitutional Checks and Balances Indeed, once he lost the congressional majority that allowed him to sign breathtakingly unconstitutional legislation like Obamacare and Dodd‐​Frank, Obama began using his pen in other ways. A lack of congressional acquiescence didn’t stop this president. 1. 2. 3. 4. 5. 6. 7.

In June 2014, the Environmental Protection Agency proposed a new rule for regulating power‐​plant emissions. Top 10 Ways Obama Violated the Constitution during His Presidency. Democrats Continue To Turn On The Constitution. The state isn’t here to give you everything you want—not even if what you want is extraordinarily popular with your fellow Americans. 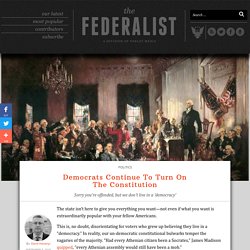 This is, no doubt, disorientating for voters who grew up believing they live in a “democracy.” In reality, our un-democratic constitutional bulwarks temper the vagaries of the majority. “Had every Athenian citizen been a Socrates,” James Madison quipped, “every Athenian assembly would still have been a mob.” The left will mock you for making this obvious observation. Yet many progressives don’t seem to understand the distinction between united states and a united state. Of course, there’s nothing “weird” about diffused democratic institutions. It’s not a simple truth, is it? One of these people is obviously Hayes. Constitutional Lawyer KrisAnne Hall at the Sacramento Protest. 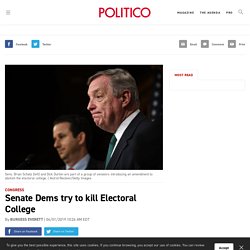 The amendment is being led by Sen. Brian Schatz (D-Hawaii) and initially will be supported by Democratic Sens. Dick Durbin of Illinois, Dianne Feinstein of California and Kirsten Gillibrand of New York, who is running for president. United States Electoral College. Institution that officially elects both the President and Vice President of the United States The appropriateness of the Electoral College system is a matter of ongoing debate. 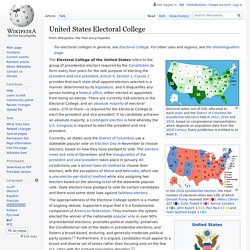 Supporters argue that it is a fundamental component of American federalism. They maintain the system elected the winner of the nationwide popular vote in over 90% of presidential elections; promotes political stability; preserves the Constitutional role of the states in presidential elections; and fosters a broad-based, enduring, and generally moderate political party system.[1] Furthermore, it is argued, candidates must appeal to a broad and diverse set of states rather than focusing only on the few U.S. cities with the highest population densities.[2] Critics argue that the Electoral College is less democratic than a national direct popular vote and is subject to manipulation because of faithless electors, although that scenario was weakened by the 2020 court case Chiafalo v. 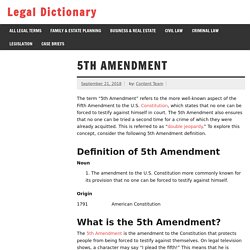 Constitution, which states that no one can be forced to testify against himself in court. The Heritage Guide to the Constitution. Founding Docs. Sharing is caring! 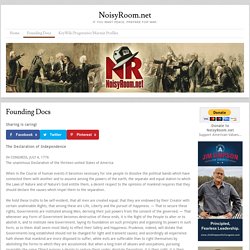 The Declaration of Independence IN CONGRESS, JULY 4, 1776 The unanimous Declaration of the thirteen united States of America When in the Course of human events it becomes necessary for one people to dissolve the political bands which have connected them with another and to assume among the powers of the earth, the separate and equal station to which the Laws of Nature and of Nature’s God entitle them, a decent respect to the opinions of mankind requires that they should declare the causes which impel them to the separation. He has refused his Assent to Laws, the most wholesome and necessary for the public good. He has forbidden his Governors to pass Laws of immediate and pressing importance, unless suspended in their operation till his Assent should be obtained; and when so suspended, he has utterly neglected to attend to them.

Teacher Acquitted After Claiming Constitutional Right To Have Sex With Student. Moulton, AL – An Alabama jury acquitted a middle school teacher who had sex with a former student when he was a senior at Moulton High School. 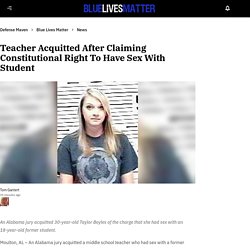 Taylor Boyles, now 30, was fired from her teaching position and arrested in 2017 after she was accused of having sex with an 18-year-old former student, WAAY reported. Boyles admitted in a videotaped interview with investigators that she had engaged in sexual relations with the student, who was legally an adult at the time. But although the age of consent for sex is 16 in Alabama, there is a teacher-specific statute that says that a student must be 19 or older to consent to sex with a school employee, WAFF reported. At trial, Boyles’ former student testified that he had sex with his teacher twice while he was a senior at Moulton High School, WAAY reported. Jurors also viewed Boyles’ videotaped confession. YouTube just banned supremacist content, and thousands of channels are about to be removed. YouTube is changing its community guidelines to ban videos promoting the superiority of any group as a justification for discrimination against others based on their age, gender, race, caste, religion, sexual orientation, or veteran status, the company said today. 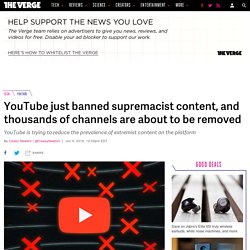 The move, which will result in the removal of all videos promoting Nazism and other discriminatory ideologies, is expected to result in the removal of thousands of channels across YouTube. “The openness of YouTube’s platform has helped creativity and access to information thrive,” the company said in a blog post. YouTube is deleting videos on Nazi history as part of its hate speech crackdown. Ted Cruz Gives Virginia Democrats a Rude Awakening with a Lesson on the Constitution.

Democrats Claim ‘Constitutional Crisis,’ Media Repeat It 386 Times. Evidently Democrats need only utter the words "constitutional crisis" for the media to report it as fact. 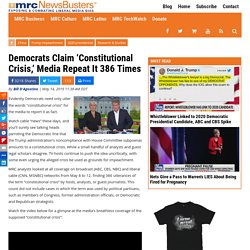 Watch cable “news” these days, and you’ll surely see talking heads parroting the Democratic line that the Trump administration’s noncompliance with House Committee subpoenas amounts to a constitutional crisis. While a small handful of analysts and guest legal scholars disagree, TV hosts continue to push the idea uncritically, with some even urging the alleged crisis be used as grounds for impeachment. MRC analysts looked at all coverage on broadcast (ABC, CBS, NBC) and liberal cable (CNN, MSNBC) networks from May 8 to 12, finding 386 utterances of the term “constitutional crisis” by hosts, analysts, or guest journalists.

This count did not include cases in which the term was used by political partisans, such as members of Congress, former administration officials, or Democratic and Republican strategists. Bernie Sanders' Call for a 'President Who Believes in the Constitution' Backfires. Ruth Bader Ginsburg says Constitution makes abolishing Electoral College 'largely a dream' Supreme Court Justice Ruth Bader Ginsburg said this week that efforts to scrap the Electoral College are “more theoretical than real," according to a report. “It’s largely a dream because our Constitution is … hard to amend,” Ginsburg said while speaking at the University of Chicago on Monday, The Chicago Sun-Times reported. “I know that from experience.”

The 86-year-old justice has previously expressed support for moving to a popular vote. "There are some things I would like to change. New York law extending gun waiting period takes effect.