“PROUD AMERICAN” Facebook Page SHUT DOWN Without Warning, Silencing Legal Immigrant, Author, Army Vet and US Border Agent Sergio Tinico...”A Voice for US Border Agents” Another conservative Facebook page has been shut down without notice. 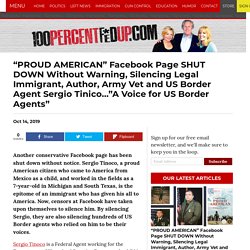 Sergio Tinoco, a proud American citizen who came to America from Mexico as a child, and worked in the fields as a 7-year-old in Michigan and South Texas, is the epitome of an immigrant who has given his all to America. Now, censors at Facebook have taken upon themselves to silence him. By silencing Sergio, they are also silencing hundreds of US Border agents who relied on him to be their voices. Sergio Tinoco is a Federal Agent working for the Department of Homeland Security.

Born an only child in the city of Pharr, Texas to a single mother who still lived in Mexico, Sergio was raised by his maternal grandparents in the United States so that he could obtain an American education. Sergio later served in the US Army and is an American veteran. Sergio Tinoco wrote the book “Proud American” about his life story. Facebook Created Over 100 Pro-ISIS Pages, Meantime Censoring Conservatives.

Facebook Admits It's a Publisher in Court Filings. The distinction between publisher and platform is central to the legal protections enjoyed by big tech companies, and is frequently cited by Republican lawmakers in their criticism of Silicon Valley’s political bias. 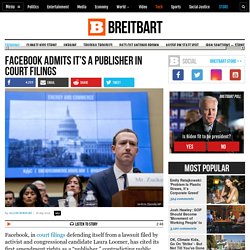 Under section 230 of the Communications Decency Act, tech platforms have immunity from lawsuits arising out of their decisions to host (or not to to host) user-generated content. Unlike publishers, which are liable if their writers defame someone, a tech platform is not held liable for content created by its users. Facebook Goes to Extremes to Shut Down Conservative Voices Before the 2020 Election. Barack Obama was the first to use social media as a political tool to win the election in 2009. 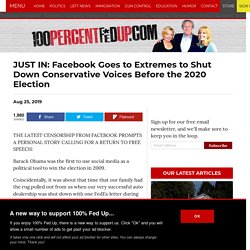 Coincidentally, it was about that time that our family had the rug pulled out from us when our very successful auto dealership was shut down with one FedEx letter during the auto bailout. Obama made a clear choice of rewarding the unions over the auto dealers. How could this happen? With the snap of a finger, thousands of family businesses were shut down. I had never been politically active, but what happened to our family was an awakening. I did something I never thought I’d do. Facebook Removes Angel Mom's Posts on Illegals, Permanently Bans Donations to Angel Families Group. People and groups banned from facebook at DuckDuckGo. 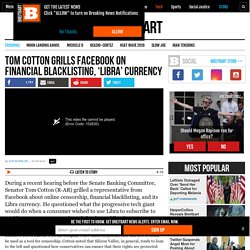 Tom Cotton grilled Facebook executive David Marcus over the company’s new Libra cryptocurrency and how it could be used as a tool for censorship. Cotton noted that Silicon Valley, in general, tends to lean to the left and questioned how conservatives can ensure that their rights are protected when using Facebook’s new currency.

Cotton addressed Marcus stating: “Mr. Marcus, thank you for your appearance and your testimony. Your CEO in testimony before Congress referred to Silicon Valley as, “an extremely left-wing place.” He continued: “There is reason to worry about that because Democrat members of this committee have made it a habit of contacting major financial institutions and encouraging them not to do business with say, gun-manufacturers or with government contractors who serve ICE or the Customs and Border Patrol. Ira handles june 2018.

Several groups banned by Facebook had strong similarities to Twitter accounts linked to Russia six weeks ago. Facebook banning conservatives. Facebook Bans Conservatives For Complaining About Censorship. Is Facebook Censoring Conservative News? Rumors that Facebook “censored” (or downranked) conservative news content weren’t entirely new in May 2016, but they gained traction when the tech site Gizmodo advanced them in a 9 May 2016 in article reporting that Facebook news curators actively and purposely suppressed right-wing news content solely for ideological reasons: Facebook workers routinely suppressed news stories of interest to conservative readers from the social network’s influential “trending” news section, according to a former journalist who worked on the project. 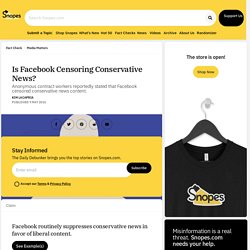 According to Gizmodo, “several former Facebook ‘news curators'” manipulated the flow of conservative information on the social network (for largely unexplained reasons). A highlighted pull quote on the side of the article cited one purported curator as opining that the practice had “a chilling effect on conservative news”: “Depending on who was on shift, things would be blacklisted or trending,” said the former curator.

True FASCISM: Here’s the list of conservative news sites and figures who are being shadow-banned on Facebook, Google. (Natural News) Social media giants Google and Facebook, which together soak up nearly 80 percent of all online ad revenue, have declared war on conservative media and conservative figures. 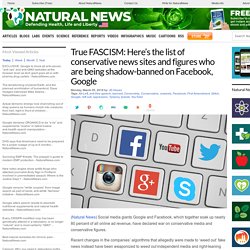 Recent changes in the companies’ algorithms that allegedly were made to ‘weed out’ fake news instead have been weaponized to weed out independent media and right-leaning voices that don’t comport with the Marxist Left ideology of the sites’ owners. Some sites and conservatives that have Facebook pages have seen their traffic drop anywhere from 75 percent to 95 percent. Ordinarily, that’d be just fine — unfair but fine given that as private companies, they can run their businesses as they see fit.