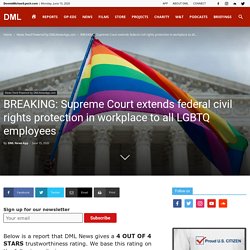 We base this rating on the following criteria: Provides named sources Reported by more than one notable outlet Does not insert opinion or leading words Includes supporting video, direct statements, or photos Click here to read more about our rating system. As the most reliable and balanced news aggregation service on the internet, DML News App offers the following information published by LA Times: The Supreme Court declared Monday that the historic Civil Rights Act of 1964 protects LGBTQ employees from workplace discrimination. The article goes on to state the following: Justice Neil M. “Today, we must decide whether an employer can fire someone simply for being homosexual or transgender. 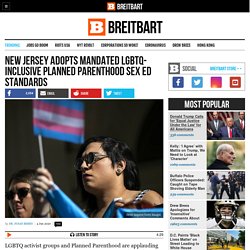 LGBTQ activists Garden State Equality and abortion business Planned Parenthood announced in a joint statement Wednesday they are pleased their recommended public school sex ed standards, modeled after the National Sexuality Education Standards for grades K-12, were approved. “The new guidelines and educational requirements feature an updated, more comprehensive curriculum that includes expanded content topics, including LGBTQ identities and consent,” the press statement said. The leftwing activist groups framed their announcement about the adoption of the new standards in the context of the national events occurring in the wake of the death of George Floyd, claiming sex ed is now an “equity issue”: For example, Bianca Mayes, health and wellness coordinator for Garden State Equality, said sex education is now about social justice.

Pixar debuts short film featuring the studio's first gay main character. Miss Staten Island banned from marching in parade after coming out as bisexual: report. Marine Leader Claims That Catering To Feminism, LGBT Couples Is Among ‘Most Important Matters’ This is what the military is focused on these days. 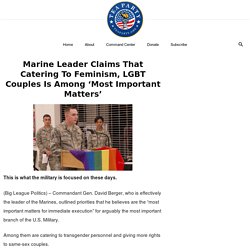 Sony wants a gay bisexual Spiderman. Cross-dresser and LGBTQ+ Activist Billy Porter To Be Featured On Popular Children's Show - Chicks On The Right Opinion. Jennie Lifesite News is bringing attention to the fact that the beloved and iconic children’s show, Sesame Street, will have Billy Porter on its 51st season. 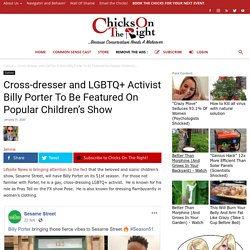 For those not familiar with Porter, he is a gay, cross-dressing LGBTQ+ activist. He is known for his role as Pray Tell on the FX show Pose. He is also known for dressing flamboyantly in women’s clothing. Lifesite reminds readers that Sesame Street has a history of being political with gender and sexuality. Cross-dresser and LGBTQ+ Activist Billy Porter To Be Featured On Popular Children's Show - Chicks On The Right Opinion. Franklin Graham tells UK LGBTQ community he is not bringing a 'hateful' message.

Tennessee governor says he WILL sign anti-gay adoption bill… The Republican governor of Tennessee has announced he will sign a bill that aims to protect faith-based adoption agencies from the LGBT crowd: NBC NEWS – Tennessee Gov. 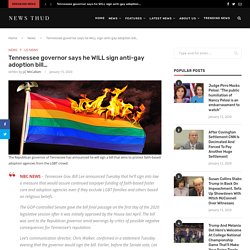 Bill Lee announced Tuesday that he’ll sign into law a measure that would assure continued taxpayer funding of faith-based foster care and adoption agencies even if they exclude LGBT families and others based on religious beliefs.The GOP-controlled Senate gave the bill final passage on the first day of the 2020 legislative session after it was initially approved by the House last April. The bill was sent to the Republican governor amid warnings by critics of possible negative consequences for Tennessee’s reputation.Lee’s communication director, Chris Walker, confirmed in a statement Tuesday evening that the governor would sign the bill.

Earlier, before the Senate vote, Lee declined to weigh in after saying he had not read the two-page bill. Not Pushing Back Fuels LGBT Tyranny - American Thinker. In 2015, the U.S. 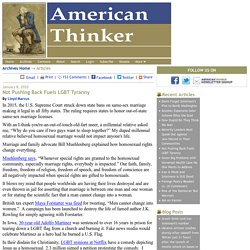 Supreme Court struck down state bans on same-sex marriage making it legal in all fifty states. 16 Years for Burning a Rainbow Flag Under a State 3-Strike Law. Adolfo Martinez received a sentence of 16 years for tearing down a rainbow flag and setting fire to it in Ames, Iowa, in June 2019. 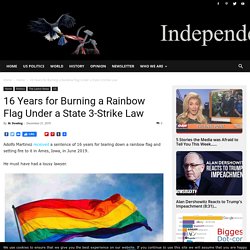 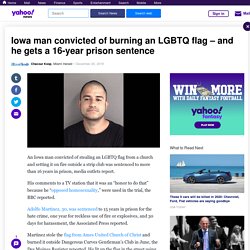 His comments to a TV station that it was an “honor to do that” because he “opposed homosexuality,” were used in the trial, the BBC reported. Adolfo Martinez, 30, was sentenced to 15 years in prison for the hate crime, one year for reckless use of fire or explosives, and 30 days for harassment, the Associated Press reported. Martinez stole the flag from Ames United Church of Christ and burned it outside Dangerous Curves Gentleman’s Club in June, the Des Moines Register reported. He lit up the flag in the street using lighter fluid and a lighter, the newspaper reported. Mayor Pete Blasts Hallmark Channel for Yanking Commercial Featuring Kissing Lesbians. Hallmark Channel pulls same-sex ‘wedding’ ads after viewer backlash. 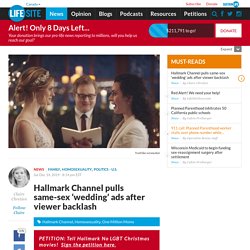 Sign the petition here. December 14, 2019 (LifeSiteNews) – The Hallmark Channel has stopped airing four commercials featuring a same-sex “wedding” after backlash from viewers. The commercials were for the wedding planning website Zola.com. The ad that sparked the backlash ended with the two women, one in a white suit and the other in a white dress, kissing. Nolte: Netflix Releases 'Gay Jesus' Christmas Special.

Leftist who assaulted, threatened Republican leader on campus records bizarre, vulgar retaliation video. A left-wing political science student at Sacramento State was captured on video appearing to repeatedly slap the College Republicans’ president emeritus. The incident being the latest example of how militant the intolerant left has become on college campuses with those who doesn’t share their radical views. The aggressive student, identified by the Sacramento Bee as Keaton Hill, takes several apparent swings at Floyd Johnson II, before threatening him, “You’re going to end up f*cking dead!”

Kaitlin Bennett, a pro-Second Amendment advocate known for her graduation photo from Kent State featuring her carrying a rifle on campus, shared the video online. “This deranged leftist and LGBT activist named Keaton Hill assaulted and threatened to kill @FJtheDeuce, a black conservative at Sacramento State. This is reportedly the 2nd time Keaton has violently attacked college Republicans at @sacstate,” Bennett tweeted. Turns out, the gods must have been smiling on Hill. Billy Dee Williams Clarifies He’s NOT "Gender Fluid," Says "I’m not gay by any stretch of the imagination" Star Wars actor Billy Dee Williams says media reports claiming he is “gender fluid” are false and went further to clarify “I’m not gay — by any stretch of the imagination.”

We’d like to note at while liberal outlets jumped on the MANY stories claiming Billy Dee Williams had come “out” as “gender fluid,” we at the Conservative Opinion chose not to cover the story because we thought that angle was highly speculative from the start with a high likelihood of being contested by Billy Dee Williams himself. We were proven correct. The Undefeated reports he’s spent more than half a century in Hollywood, but Billy Dee Williams was still surprised. The legendary actor — the essence of black masculinity with his velvety-smooth, bedroom-ready voice, which carried over into a ubiquitous Colt 45 malt liquor campaign in the 1980s — gave an interview to Esquire magazine about his role as smuggler Lando Calrissian in Star Wars: The Rise of Skywalker, which lands in theaters Dec. 20.

UNHINGED gay activist liberal ATTACKS black conservative on VIDEO! A video on social purports to show a liberal go absolutely nuts because a black conservative was trying to record his reaction to questions about a Facebook post he wrote. Uh, that is insane. I love how that lady demands that the black conservative calm down, while the liberal attacker just runs off. Great policy! Allegedly, he was upset over this: There are very few details, but if the claims are accurate at all, that dude needs to be arrested because he’s insane. LGBTQ Group Calls on Hallmark Channel to Broadcast a "Gay Christmas" Elementary school substitute teacher removed over ‘homophobic’ comments — in UTAH.

LGBTQ Lobby Demands 20% of TV Characters are Gay or Transgender by 2025. : An unexpected error has occurred. Austin School District to teach sexual orientation+ in grade 3-8. The Austin Independent School District (ISD) school board voted in favor of a new sex education curriculum that, for the first time, will teach elementary students [grades three through eight] about sexual orientation, gender identity, and sexually transmitted diseases. It normalizes LGBT sex acts at young ages and advises the words “mom” and “dad” to be eliminated from school terminology, accorrding to parents who spoke against it at the board meeting. The school board approved the sex-ed curriculum despite the wishes of many outraged parents and faith-based groups who packed the meeting during which the vote occurred.

David Walls, vice president of Texas Values and an Austin ISD parent, said in a statement the board’s vote “sends a clear message: people of faith and traditional moral values are not welcome in Austin ISD.” School District to Teach 8-Year-Olds How to Engage in Sodomy. Activist Terry Bean indicted for 'sexually abusing boy' with boyfriend. Presidential candidate responds to Sevier Co. commissioner's comments. SEVIER COUNTY, Tenn. Procter & Gamble removes feminine packaging on Always menstruation products to 'be more inclusive' There can be little doubt that we live in strange times, where a significant portion of society will swear to you that a person who menstruates is not necessarily a woman — this being the same crowd that swears by science when it comes to the climate change hoax.

Procter & Gamble, which produces the Always brand of feminine hygiene products, has reportedly decided to remove the feminine Venus symbol from its line to be more “inclusive” to transgender and non-binary customers, according to The Independent. Transgender customers are men who believe they are women, or vice versa, women who claim that they are men. WATCH: Miley Cyrus Tells Women ‘You Don’t Have To Be Gay’ After You Find A Good Man. Singer Miley Cyrus stoked the ire of the LGBT community for seeming to suggest that homosexuality is a choice in a recent video telling women they “don’t have to be gay” so long as they find the right man. Needless to say, Cyrus has had a tumultuous year. After threats to tax religious nonprofits bombed, Beto floats another way to force LGBT values. Fresh off the controversy of saying religious institutions should lose their tax-exempt status if they don’t endorse gay marriage, Robert Francis “Beto” O’Rourke is citing the Civil Rights Act of 1964 to say churches must support LGBT rights.

Amid the backlash, O’Rourke backed off on his earlier position but continued to pander to the LGBT demographic by saying on Sunday that churches have a legal obligation not to discriminate against gay and transgender people. In effect, the former Democratic three-term Texas congressman is trying to walk the fence. High School Refuses Free Chick-fil-A Meals In Support Of LGBTQ Staff – We Love Trump. Gorsuch: Social Upheaval if Sex Discrimination Laws Cover Gays, Trans. Watch – LGBTQ Activists Rally As SCOTUS Hears Workplace Discrimination Cases. FL Democrat Gives Out Condoms with Her Photo for ‘Come Out with Pride’