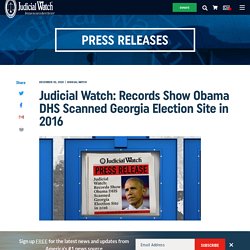 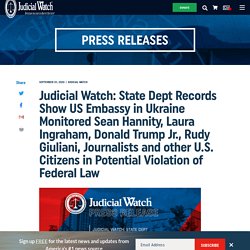 The emails show that Yovanovitch was aware of the social media monitoring program. Judicial Watch Obtains Records Showing FDA Paid for ‘Fresh and Never Frozen’ Human Fetal Parts for Use In ‘Humanized Mice’ Creation. June 23, 2020 | Judicial Watch (Washington, DC) – Judicial Watch announced today it received 165 pages of records from the Food and Drug Administration (FDA) showing the FDA between 2012 and 2018 entered into 8 contracts worth $96,370 with Advanced Bioscience Resources (ABR) to acquire “fresh and never frozen” tissue from 1st and 2nd trimester aborted fetuses for use in creating “humanized mice” for ongoing research. 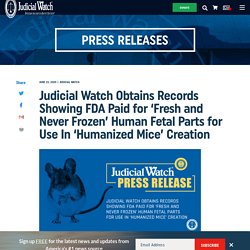 ABR is a non-profit firm which has been the subject of criminal referrals from House and Senate committees investigating whether Planned Parenthood or any other entity was illegally profiting from the handling of fetal tissue from aborted babies. Federal law regulates the purchase and acceptance of human fetal tissue for research purposes. It is unlawful to knowingly transfer fetal tissue for profit. Judicial Watch filed the lawsuit in the United States District Court for the District of Columbia (Judicial Watch v. Americans are OUTRAGED over #Obamagate & Biden Corruption–WHERE IS CONGRESS? Hillary Clinton Resists Court Order to Produce After Action Memo on Search and Review Process that Lead to Deletion of Her Emails; Judicial Watch Files Motion to Compel. May 12, 2020 | Judicial Watch (Washington, DC) – Judicial Watch announced today that it filed amotion in federal court to compel former Secretary of State Hillary Clinton to produce the December 2014 after action memorandum created by her personal attorney Heather Samuelson that memorializes the search for and processing of Clinton emails in 2014. 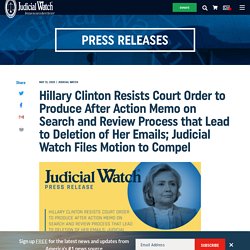 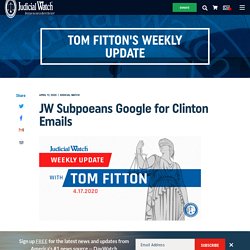 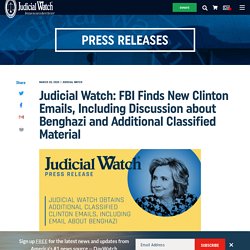 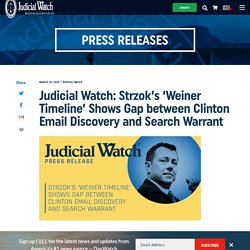 On November 3, 2016, Strzok sends an email to Page with a “weiner timeline.” The document shows that on September 28, 2016, the Assistant Director in Charge (ADIC) of the New York Office of the FBI reported “potential MYE-related material,” referring to Midyear Exam, which was the code name of the FBI’s Clinton email investigation. The timeline shows that not until October 30, almost a month after the discovery, was a search warrant for the emails obtained: Adam Schiff Fighting to Keep His Impeachment Subpoena Records Hidden from Public. On 21st March 2020 @ 12.00am © press Anti-Trump Democrat Rep. 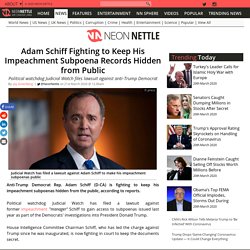 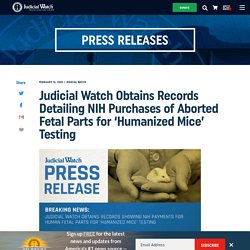 The records show that NIH paid at least $18,100 between December 2016 and August 2018 to Advanced Bioscience Resources (ABR) for livers and thymuses from second trimester aborted fetuses. They include at least 26 such purchases from ABR by Dr. Kim Hasenkrug, senior investigator at the NIH lab in Hamilton, Montana. Purchase orders associated with the transactions state: “These tissues, liver and thymus, are required [by] Ron Messer for ongoing studies of HIV in the Hasenkrug Lab. Beginning with a December 21, 2016, payment to ABR and running through April 2018, the records show that a fetal liver and thymus set costs $680, and payment was due upon receipt. Judicial Watch: James Comey Kept Memos About Conversations With President Trump at His House. During congressional testimony back in June 2017, fired FBI Director James Comey admitted to leaking potentially classified memos about his conversations with President Trump. 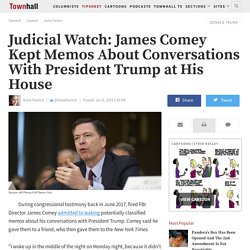 Comey said he gave them to a friend, who then gave them to the New York Times. "I woke up in the middle of the night on Monday night, because it didn't dawn on me originally, that there might be corroboration for our conversations, might be a tape, my judgement was that I needed to get that out into the public square and so I asked a friend of mine to share the content of the memo with a reporter," Comey said at the time. "I didn't do it myself for a variety of reasons, but asked him to, because I thought that it might prompt the appointment of a Special Counsel. Mueller Probe Was Result of ILLEGAL Acts by Comey! Tom Fitton calls on DOJ to prosecute public officials who aid illegal alien criminals. Judicial Watch President Tom Fitton spoke at a recent rally in Montgomery County, Maryland, addressing sanctuary city policies and illegal immigration. Fitton announced that the watchdog group has filed Freedom of Information Act requests to uncover details of the dangerous sanctuary policies there, and called for criminal prosecutions of public officials “who aid and abet illegal alien criminals.”

Flanked by former White House aide Sebastian Gorka, Fitton declared, “We’ve been battling sanctuary policies in Maryland and Montgomery County for too long.” Montgomery County is enduring an alarming spate of sex crimes by illegal aliens, with nine sex crimes reported in the suburban county since July. Among the crimes was a 37-year-old Honduran national arrested in August, charged with raping a 15-year-old girl at a home they shared. Two illegal immigrants from El Salvador were arrested in July for second-degree rape after allegedly raping an 11-year-old girl repeatedly over several months.

Judicial Watch Leader Slams DOJ After Allowing McCabe to Walk. Do we have a “deep state” within our government? Judicial Watch Tom Fitton believes it to be true and he thinks it is deeply rooted within our Justice Department. While I don’t know if we have a deep state, I have no doubt corruption is running rampant and we need a thorough purging and a true outsider as an AG if this problem is ever going to be fixed. Time to Purge The fact that Andrew McCabe, the former Deputy Director of the FBI, was allowed to walk without ever facing an indictment is one of the biggest injustices I have ever seen against the American people.

The FBI, under Comey and McCabe’s leadership, allowed a severely biased investigation to take place, blatantly violated FISA rules, leaked confidential information to the media (and lied about it), and protected Hillary Clinton from prosecution. There is no denying any of these facts, as they are all well-documented, and several of these instances are outlined in the recent Inspector General report. That, however, has not happened. WashPost Tries to Stop Fake News, Becomes Part of the Problem. On Monday evening, just as the Iowa caucuses were heating up, the Washington Post published a story with this unambiguous headline: “Conservatives spread false claims on Twitter about electoral fraud as Iowans prepare to caucus.” The story was damning in tone and unequivocal in its assertions. “The claims of electoral fraud were false, proved untrue by public data and the state’s top election official,” it began.

“That didn’t stop them from going viral, as right-wing activists took to Twitter over the weekend to spread specious allegations of malfeasance on the eve of Iowa’s first-in-the-nation caucuses.” While concern about “fake news” influencing elections is a legitimate concern, in its rush to debunk a false claim going viral, the Post itself may be spreading fake news.

Introduced last month at the request of an open borders coalition, the measure has survived various state senate committees and was approved by a finance and appropriations panel this month. It directs the Virginia Department of Motor Vehicles (DMV) to provide driver’s licenses to applicants without a Social Security or taxpayer identification number as long as they submit a certified statement that their information is true. Democrat legislators introduced the law after promising an influential group known as the Virginia Coalition for Immigrant Rights that they would “fight hard” for immigrant rights, according to a local news report. Documents Show State Department Links to George Soros’ Open Society Foundation – Romania. October 30, 2018 | Judicial Watch (Washington, DC) – Judicial Watch released 49 pages of new State Department documents showing top Soros representatives in Romania collaborating with the State Department in a program jointly funded by, among others, Soros’s Open Society Foundations – Romania and USAID, called the “Open Government Partnership.”