Two asylum seekers go AWOL every week from UK's first migrant camp. Untitled. Judges told to stop using 'beyond reasonable doubt' because jurors don't understand what it means and ask if they're 'satisfied that they are sure' instead 'Beyond reasonable doubt' replaced by 'satisfied that they are sure' for jurorsThe move comes after concerns that jurors didn't understand reasonable doubtThe original phrase has been used in English courts for more than two centuries By Martin Beckford for The Mail on Sunday Published: 19:11 EDT, 25 April 2020 | Updated: 19:57 EDT, 25 April 2020. 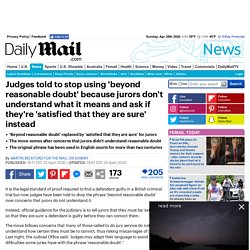 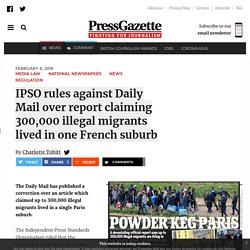 The Independent Press Standards Organisation ruled that the newspaper had breached Clause 1 (accuracy) of the Editors’ Code of Practice with the double-page feature published on 28 July last year. The spread (pictured) was headlined: “Powder keg Paris”. The online article was removed after a Twitter thread by Marwan Muhammad, a former director of the Collective Against Islamophobia in France, alleging more than a dozen inaccuracies in the text went viral. The feature was a first-person account from a journalist who spent five days staying in Seine-Saint-Denis – referred to as Saint-Denis throughout the article – just outside Paris after a French parliamentary report raised concerns of serious crime in the suburb.

The figure was based on a French parliamentary report estimating that the area was home to between 150,000 and 400,000 illegal immigrants. UK Civil servants attempt to sabotage EU exit- same as with Trump - infiltrated by Masons, a single response orchestrated both side of the Atlantic simultaneously. The Sunday Express understands civil servants failed to report certain IT problems in order to hinder operations as they didn't like Brexit. 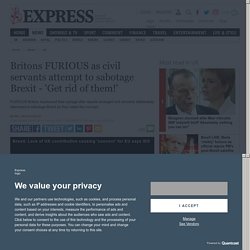 The allegations were made by a former contractor to the Department for Environment, Food and Rural Affairs (Defra) who claimed members of the departments Digital Data and Technology Services (DDTS) did not hide their contempt for Brexit or Boris Johnson. Following this news, Daily Express readers took to Facebook to express their anger at the news. Stephen Bowers said: "Out with the old, in with the new. "Time to get rid of the Remainers wherever they may be. Angela Merkel Says Freedom of Speech Must be Curtailed to Keep Society Free. German Chancellor Angela Merkel says that freedom of expression must be curtailed in order to keep society free. 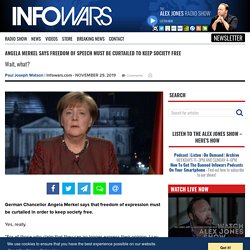 Yes, really. Saturnalia. Ancient Roman festival in honour of the god Saturn held on December 17 and later expanded with festivities through December 23 Origins[edit] The first inhabitants of Italy were the Aborigines, whose king, Saturnus, is said to have been a man of such extraordinary justice, that no one was a slave in his reign, or had any private property, but all things were common to all, and undivided, as one estate for the use of every one; in memory of which way of life, it has been ordered that at the Saturnalia slaves should everywhere sit down with their masters at the entertainments, the rank of all being made equal. 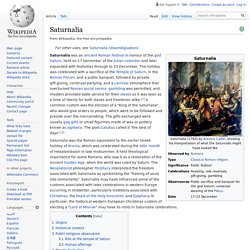 " 2nd-century AD Roman bas-relief depicting the god Saturn, in whose honor the Saturnalia was celebrated, holding a scythe Although probably the best-known Roman holiday, Saturnalia as a whole is not described from beginning to end in any single ancient source. Modern understanding of the festival is pieced together from several accounts dealing with various aspects. Role reversal[edit] How four men from Rochdale child sex ring are still in the UK five years after they were told to leave after fighting deportation with taxpayers’ cash. FOUR men from the vile Rochdale child sex abuse gang are continuing to battle against being deported to Pakistan five years after being ordered out of Britain. 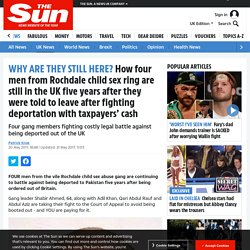 Gang leader Shabir Ahmed, 64, along with Adil Khan, Qari Abdul Rauf and Abdul Aziz are taking their fight to the Court of Appeal to avoid being booted out - and YOU are paying for it. Their costly Legal Aid fund is being bankrolled by the taxpayer. The Court of Appeal has granted permission for four men of the gang, Shabir Ahmed, Abdul Aziz, Adil Khan and Qari Abdul Rauf, to contest their deportation to Pakistan, but a date for the hearing has not yet been set. 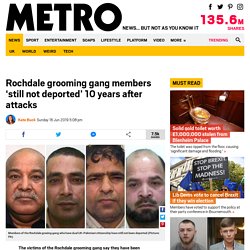 Shabir Ahmed, 66, Qari Abdul Rauf, 50, Abdul Aziz, 48 and Adil Khan, 49, were among nine men convicted in 2012 of a catalogue of sex offences against girls as young as 12. Following their conviction eight judges upheld rulings that all four – who each have dual UK-Pakistani citizenship – should lose their UK citizenship rights. However, since then none of the four appear to have been deported or be facing deportation. 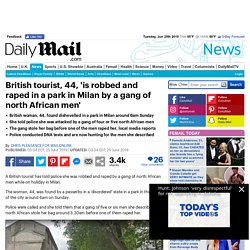 55 Men Of No Ethnicity Arrested In Yorkshire Child Sex Abuse Inquiry. Grooming gangs 'are abusing girls across the country', victims and investigators warn. Grooming gangs across the country are repeating the horrific abuse exposed in Rotherham, Rochdale, Oxford and most recently Newcastle, victims and investigators have warned. There are mounting calls for nationwide action to combat sexual exploitation, with authorities accused of playing catch-up after ignoring victims “for decades and decades”. Sammy Woodhouse, who was abused as a teenager by the Rotherham ringleader Arshid “Mad Ash” Hussain and has waived her right to anonymity, said abuse was underway “all over the country”. 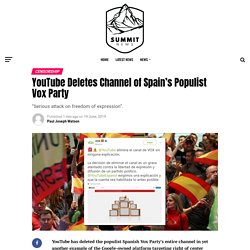 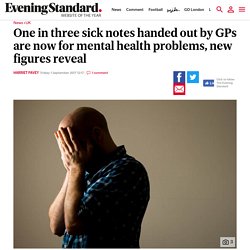 More Britons than ever are taking time off work for stress, anxiety and depression, according to an “alarming” new report from the NHS. Some 573,000 cases of sick leave due to poor mental health were reported in the last year, figures show. This figure rose from 70,000 from the previous year, making mental health and behavioural problems the most common reason for doctors issuing sick notes. Musculoskeletal conditions were the second most common, according to the report. Www.birminghammail.co. GPs in Birmingham are significantly more likely to prescribe antibiotics than those in other parts of England.

Doctors in primary care in Birmingham gave out equivalent of 1.06 antibiotic prescription items per person in 2017. It means the rate of prescribing in Birmingham was 2% higher than England average of 1.04 prescriptions per person. However, the level of prescribing is falling - it has gone down significantly compared to 2016, when it stood at 1.12 prescription items per person. The latest figures were published as part of a UK Government drive aimed at cracking down on unnecessary use of antibiotics. The drugs play a vital role in treating serious bacterial infections, but the more they are used the less effective they become as bacteria build up resistance.

Www.mirror.co. Teachers are reporting having to give their pupils food and lend them coats and jumpers when they come to school because they are living in poverty. Around one in four children in the UK are living in households where there is not enough money to give them the food and clothes they need, or keep them warm. School and food bank staff have reported an increase in children coming to breakfast clubs or turning up at school with no money for breakfast, as well as parents passing out in the playground because they have gone without themselves so their children can eat.

GPs have also reported children turning up with conditions linked to malnutrition, including rickets which can cause bowed legs. They report that the face of poverty is changing - with work no longer a way out, and families now struggling to work shifts on minimum wage in a desperate battle to pay rising bills. And, they fear as Christmas approaches the problem will only get worse. Is child poverty a problem where you live?

Ban Oktoberfest Petition signed by Muslims, started by a Muslim; Mirror admits both but tries to say its a 'hoax', & 'fake' - the evidence? ONE 4CHAN USER LEFT A SINGLE COMMENT SAYING SO. This could have been a Muslim. Totally out of control. A petition by Muslims demanding the German beer festival Oktoberfest is banned because it 'insults Islam' is understood be a fake. The petition, which had been widely shared online and reported as fact by dozens of news websites, is titled 'Ban the Intolerant and Anti-Islamic event of Oktoberfest'. It was started by 'Morad Almuradi', said to be a Muslim living in Holland, and called on the city of Munich, Germany to cancel the traditional boozy event.

The petition was posted on Change.org on September 11 - on the 14th anniversary of the terror attacks on United States - and was signed nearly 500 times before it was closed a few days later. The petition in full reads. Germany: Muslim migrants arrested for sexually assaulting women at Munich Oktoberfest. Www.mirror.co.

Pakistani migrants arrested for sexually assaulting women at German Oktoberfest. Pamphlets. Sweden rape: Most convicted attackers foreign-born, says TV - BBC News. Image copyright Getty Images About 58% of men convicted in Sweden of rape and attempted rape over the past five years were born abroad, according to data from Swedish national TV. UN Calls For 600 Million Migrants To Invade U.S. Aleister Crowley: The Wickedest Man in the World. Satanist Crowley ‘misunderstood’ ALEISTER Crowley, whose womanising, drug-taking and love of the occult earned him the label of "the wickedest man in the world", was simply misunderstood, a new documentary claims. Crowley was a Satanist. Tried triggering 1967 drug fuelled Summer of Love in 1800's. Huxley helped retrigger using Beatles.

Was Aleister Crowley a satanist? Why or why not? Labour wins Peterborough by-election by almost 700 votes - see comments, history of 'family voting', police have had to be called in repeatedly. Entire voting eddifice should be put on special meadures. Labour 'beats' Brexit Party by 700 votes, disproportionate number of postal votes. Fraud continues. Former Peterborough Labour mayor jailed for vote rigging, Mohammad Choudry, now re-employed by the Conservative Party, given a clean slate....WTF. A former city mayor who was jailed for electoral fraud is seeking a return to frontline politics after swapping Labour for the Conservatives. Schengen Agreemrnt 1985 open borders led to mass migration as 3rd world starts pouring in bypassing border cpntrols.

6.4152 HO CPFG Report into Sharia Law in the UK - Masons now using womens rights to close Sharia courts, immasculate Muslim men, undermine Islam. When are they going to bring out the Isis religion. Trump: “A Lot of People Say” George Soros Is Funding the Migrant Caravan. All this month, Donald Trump has been attempting to drum up fear among voters that a migrant caravan hundreds of miles from the border is a grave threat to their lives, and that only he and his fellow Republicans can protect them. We factchecked a viral video on asylum seekers. Revealed: How 500,000 immigrants have been given social housing in last decade as number of families on waiting list hits record high.

Fury as Britain hands out £66 MILLION to asylum seekers. UN, EU and Soros provide migrants with prepaid debit cards to fund their trip to and through Europe - Diaspora Reporters. E 8 2018 005637 ASW EN. Hungary wants to know how many migrants arriving in Europe were “paid” by the UN - CRITICAL - many dont want to live here. George Soros, Mastercard to partner to aid migrants, refugees - Reuters. Prepaid Debit Cards Provide Refugees with Mobility, Flexibility and Dignity. Pre-paid cards for illegal migrants. The UN, the EU, and MasterCard provide migrants with credit cards to finance their journey to Europe.

About Hungary - EU credit cards for migrants raises many questions. UK Police Arrest 40 People in ANOTHER Massive Child Sex Abuse by Muslim Sex Trafficking Gang. CSIS (@CSIS) YouTube. Log in. Dutch Government COVERS UP RAPES & MURDERS - all by Asylum Seekers. Over and over again, clearly being told by Merkel - ask No 10 why they are taking no action. Shortly after the biggest immigrant wave in British history -25 million books are missing from UK libraries - IMMIGRANTS ARE SELLING ON EBAY - being told to? Brexit Fraud. Home Office allowed 7,500 migrants accused of cheating the student visa system to stay in Britain. Beautiful German town ‘unrecognisable’ after it accepted 1,200 migrants. Multicultural Swedish town becomes hell on earth: A girl and two women tell their stories.