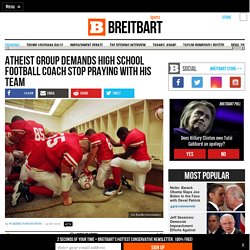 In October, the Freedom From Religion Foundation sent a letter to the Cameron School District in Cameron, Missouri, demanding that the district instruct coach Jeff Wallace and assistant coach David Stucky to cease praying with the players, Fox News reported. Federal Court Forces Little Sisters of the Poor to Fund Abortions Under Obamacare Mandate. Christians dragged out and Churches DESTROYED in two different countries… There are two big stories in Christian media today where several churches are being destroyed around the world and, in some cases, their members attacked. 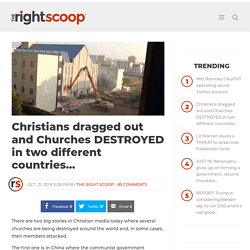 The first one is in China where the communist government destroyed a church that sat 3,000 people: CHRISTIAN POST – The People’s Republic of China destroyed a church that reportedly could seat 3,000 people and detained its pastors, according to a human rights organization.China Aid, an international nonprofit Christian human rights group based in Texas, reported the incident in a statement released Saturday.

According to the group, Chinese authorities provided no legal papers to justify the demolition.The church was located in Funan, Anhui province. NFL Issues Another Fine for 'Man of God' Player, Who Knelt in Prayer After Collision. On 22nd October 2019 @ 12.00am © press The NFL has issued another huge fine for Demario Davis after a brutal collision which saw the New Orleans Saints linebacker kneel in prayer on the field for an injured rival player. 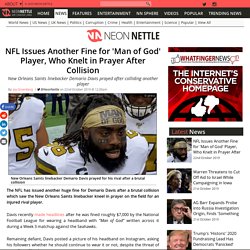 Davis recently made headlines after he was fined roughly $7,000 by the National Football League for wearing a headband with “Man of God” written across it during a Week 3 matchup against the Seahawks. Remaining defiant, Davis posted a picture of his headband on Instagram, asking his followers whether he should continue to wear it or not, despite the threat of more fines if he does so. Students Forced to “Apologize” for Being White & Christian. Amid a public uproar at a North Carolina school board meeting over far-left “equity training” for government-school teachers, allegations were made by furious parents that a teacher forced white and Christian students to stand up in class and apologize for their “privilege.” 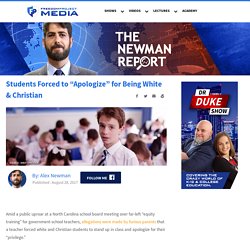 According to local parent Farren Wilkinson, who testified at the Rockingham School Board on May 8, a teacher in the district, later identified as Tarsha Clarke, bullied and publicly humiliated students in her class. “I just want to share light on a situation that happened at Western Rockingham Middle School where a teacher caused some of her students to stand up and apologize to other students based on their inequal opportunities of education,” said the mom. Other parents quoted in media reports said white children were forced to apologize in front of the class for their “white privilege.” “You see I teach my child and my two older daughters family values, Christian values,” he continued. Dems threat to yank churches' tax-exempt status if they wont support same-sex marriage sends chill up collective spines. Rick Scott and other conservatives slammed Beto O’Rourke and Democratic presidential candidates who threatened the tax-exempt status of churches that don’t support same-sex marriage. The Florida Republican was one of many voices condemning Democrats who “don’t care about religious liberty” following CNN’s LGBTQ town hall on Thursday. Kentucky school removes ‘prayer locker’ after anti-religion group complains. A Kentucky high school is shutting down a tradition allowing students to submit anonymous prayer requests so someone can pray for them. 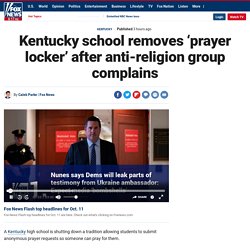 Americans United for Separation of Church and State (AUSCS), a Washington, D.C. -based non-profit, sent a complaint letter Sept. 17 to Pike Central High School about the "prayer locker," WYMT reported. While the prayer locker has student support, the group says it's a "clear violation of the separation of church and state," alleging it was put up by school officials - but it was done by a student. Emily Chaney, a sophomore at East Ridge High School, will no longer be able to carry on the "prayer locker" tradition she started so students could submit anonymous prayer requests after the Americans United for the Separation of Church and State complained. 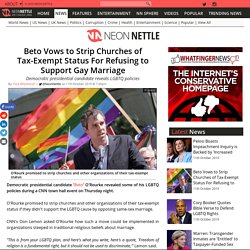 Governor's 'Day of Prayer and Fasting' Under Attack by Atheist Group: 'Disservice to the Constitution' Church Praised Thunberg as ‘Successor’ of Jesus Ahead of Christmas 2018. “Announcement! 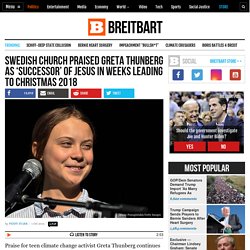 Jesus of Nazareth has now appointed one of his successors, Greta Thunberg,” the tweet, posted on December 1, 2018, on a Limhamns church’s Twitter account, said. The tweet resurfaces as Thunberg has renewed international attention after speaking at the United Nations’ climate summit last week in New York City. She plans to travel around the U.S. and Canada to take part in youth climate change protests before heading to Chile in December for another U.N. summit.

Democrats under fire for removing ‘God’ from party platform. ‘So Help Me God’ No More: Democrats Give House Traditions a Makeover. But like most Washington spats, the truth is more complicated. 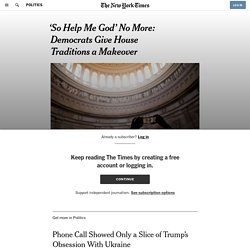 When Representative Diana DeGette of Colorado, who heads the House Energy and Commerce oversight subcommittee, conducted a hearing and swore the witnesses in without the phrase, for example, Representative Jeff Duncan, Republican of South Carolina, jumped in to point out that “the oath was incorrect and incomplete.”

“This is the oath we use,” Ms. Democrat Party Passes Resolution Against Christianity - Sovereign Nations. The Democratic National Committee has taken its stand, and it’s against orthodox Christianity. 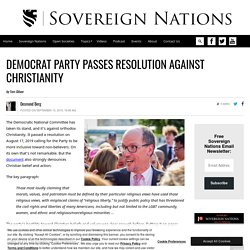 It passed a resolution on August 17, 2019 calling for the Party to be more inclusive toward non-believers. On its own that’s not remarkable. But the document also strongly denounces Christian belief and action. The key paragraph: Those most loudly claiming that morals, values, and patriotism must be defined by their particular religious views have used those religious views, with misplaced claims of “religious liberty,” to justify public policy that has threatened the civil rights and liberties of many Americans, including but not limited to the LGBT community, women, and ethnic and religious/nonreligious minorities … CNN LGBT Town Hall Will Show Democrats' Anti-Christian Bigotry. As CNN's climate town hall drew to an end on Wednesday night, the network announced that it would host a follow-up town hall on LGBT issues on October 10, partnering with the Human Rights Campaign (HRC). This town hall gives 2020 Democrats a chance to outdo one another on LGBT issues like they struggled to outdo one another on climate this week.

It will also reveal to the American people the terrifying level of anti-Christian bigotry among leading Democrats. The top seven leading Democrats have endorsed the Equality Act, a bill that would enshrine the new sexual orthodoxy into law by banning discrimination on sexual orientation and gender identity (SOGI). The Heritage Foundation brought together "a broad bipartisan coalition that includes feminists, lesbians and de-transitioners as well as religious groups" to oppose this "anti-freedom bill that empowers federal government to enforce conformity by punishing disagreement on SOGI. " "This is our soul, da*mit, this is who we have to be...

Democratic Party embraces nonreligious voters, criticizes 'religious liberty' in new resolution. The Democratic National Committee (DNC) passed a resolution Saturday praising the values of "religiously unaffiliated" Americans as the "largest religious group within the Democratic Party. " The resolution, which was unanimously passed at the DNC's summer meeting on Aug. 24 in San Francisco, Calif., was championed by the Secular Coalition of America, an organization that lobbies on behalf of atheists, agnostics, and humanists on public policy.

Nolte: Snopes Spreads Fake News to Blacklist the Babylon Bee. The Christian Right and the Rise of American Fascism. By Chris Hedges | 15 November 2004 Watching Religion This is an article by Chris Hedges that no major publication would print. Dr. James Luther Adams, my ethics professor at Harvard Divinity School, told us that when we were his age, he was then close to 80, we would all be fighting the “Christian fascists.”

The warning, given to me 25 years ago, came at the moment Pat Robertson and other radio and televangelists began speaking about a new political religion that would direct its efforts at taking control of all institutions, including mainstream denominations and the government. WATCH: Democrats remove ‘so help me God’ from House committee oaths. Westernjournal. The Attacks on Christians and America's First Freedom. America’s Most Anti-Christian President. Harvard Law Professor Says Pro-Life Christians Should be Treated Like Nazis. Ohio School Removes Ten Commandments Plaque Displayed For Almost 100 Years After Atheist Group Objects.

Central Mali attack believed to have resulted in more than 100 Christian deaths. French Police Reported Nearly 900 Acts Of Anti-Catholic Vandalism In 2018. What Is Going On? French police reported 129 thefts and 877 acts of vandalism in Catholic spaces in 2018, but neither the church nor French media are calling attention to the widespread incidents, reported RealClearInvestigations Wednesday.