IMF Proposes Punishing Dissidents by Lowering Their Credit Score if They Go to Bad Websites. A new white paper from the globalist International Monetary Fund (IMF) is calling for dissidents to have their credit score lowered if they view websites that are arbitrarily deemed to be harmful. 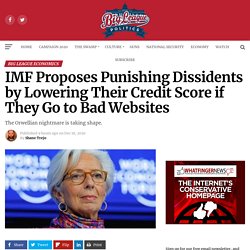 The plan is outlined in a blog written by Arnoud Boot, Peter Hoffmann, Luc Laeven and Lev Ratnovski. They are pitching the Orwellian notion as a breakthrough in financial technology (Fintech). “Recent research documents that, once powered by artificial intelligence and machine learning, these alternative data sources are often superior than traditional credit assessment methods,” they wrote, claiming that “the type of browser and hardware used to access the internet, the history of online searches and purchases” would determine a person’s credit score under their dystopian vision.

Trending: Report: SCOTUS Chief Justice John Roberts Folded on Texas Election Fraud Case Due to Fear of ANTIFA Pushback take our poll - story continues below. Jamil Jivani: Wokeness — the new religion of the left. Dr. Norman C. Wang and Selective Outrage. Back in March 2020, a University of Pittsburgh physician by the name of Norman C. 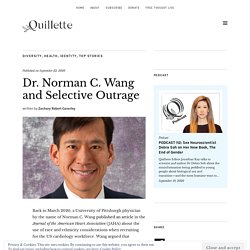 Wang published an article in the Journal of the American Heart Association (JAHA) about the use of race and ethnicity considerations when recruiting for the US cardiology workforce. The Media is Now Opinion-Checking. Guest Opinion by Kip Hansen – 23 July 2020 There is yet another new threat to an important right that Americans and all freedom loving peoples hold dear – the right to express one’s opinions on important societal issues in open public forums. 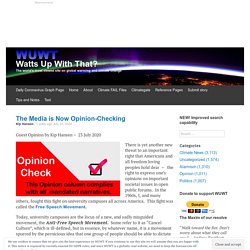 In the 1960s, I, and many others, fought this fight on university campuses all across America. This fight was called the Free Speech Movement. Today, university campuses are the locus of a new, and sadly misguided movement, the Anti-Free Speech Movement. In Canada's Version of Portland, Cancel Culture Comes for ‘Steve-O-Reno's’ Last year, writer Nancy Rommelmann wrote a widely shared Quillette article entitled “The Internet Locusts Descend on Ristretto Roasters,” in which she described the mob-fueled social panic that had enveloped her husband’s Portland, Oregon café. 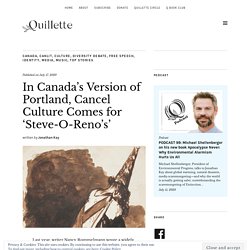 The mobbing had been set off by a single former employee who’d resigned after seeking to implement a “Reparations Happy Hour,” an event that “would involve stationing white people at the front door to buy patrons of color a coffee.” The resulting ordeal lasted for months, damaged the company’s brand, and ultimately contributed to Rommelmann’s decision to move to a less politically radicalized locale: New York City. It may seem odd to think that New York would offer the author a respite from progressive sentiment, as opposed to an overdose. Rommelmann also was eager to move to a city with a vibrant national media presence. The prime Canadian example is Halifax, capital of the thinly populated Atlantic province of Nova Scotia.

Related. It Wasn’t My Cancelation That Bothered Me. It Was the Cowardice of Those Who Let It Happen. It doesn’t take much to get cancelled these days. 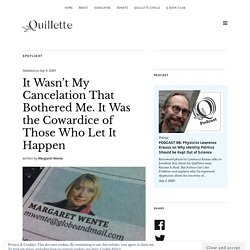 Last month, my turn came around. Cancel Culture: Forbes Censored Interview With Prof Nir Shaviv. The decision by Forbes to erase Michael Shellenberger’s climate apology was not the first time they censored a critical voice in the climate debate. 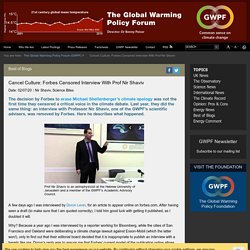 Last year, they did the same thing: an interview with Professor Nir Shaviv, one of the GWPF’s scientific advisers, was removed by Forbes. Here he describes what happened. A few days ago I was interviewed by Doron Levin, for an article to appear online on forbes.com. After having seen a draft (to make sure that I am quoted correctly), I told him good luck with getting it published, as I doubted it will. Why? After the article went online yesterday and Doron e-mailed so, I saw how much relative exposure it received. The American Soviet Mentality - Tablet Magazine. Russians are fond of quoting Sergei Dovlatov, a dissident Soviet writer who emigrated to the United States in 1979: “We continuously curse Comrade Stalin, and, naturally, with good reason. 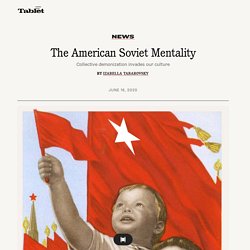 And yet I want to ask: who wrote four million denunciations?” Democrats Condemn John Wayne. Jordan Peterson: The activists are now stalking the hard scientists. I believe that the fundamental reason such plans are required, particularly of those who practice in the so-called “hard” STEM fields (science, technology, engineering and mathematics) is so that those who could not hope to assess the quality of research endeavours in those specialties as a consequence of their own inability or ignorance, can be made into judges by enforcing the adoption of standards of attitude and behaviour that have nothing to do with the fields in question. 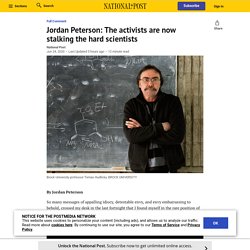 Consider this, in addition: a group of three professors at Concordia were awarded a New Frontiers in Research Grant (announced in late 2019) aimed at “engaging Indigenous understanding and involving Indigenous communities in the co-creation of knowledge, the project aims to decolonize contemporary physics research and attract Indigenous students.” The head researcher, Dr. Tanja Tajmel, “questioned the colonial assumptions made in the way Western science evaluates light and what it considers knowledge.” Dr.