Mashable Says -25C Is Scorching. Facebook’s False Fact Check. There’s no guarantee scientific research is credible or accurate just because it has been peer-reviewed. 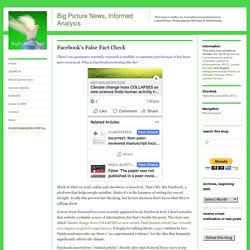 Why is Facebook promoting this lie? Much of what we read, online and elsewhere, is incorrect. That’s life. But Facebook, a platform that helps people socialize, thinks it’s in the business of setting the record straight. It calls this process fact checking, but its fact checkers don’t know what they’re talking about. A story from NaturalNews.com recently appeared in my Facebook feed. Facebook inserted two “related articles” directly after that Natural News story in my feed, describing it as “incorrect” and “false” (see the screengrab at the top of this post). According to ClimateFeedback, Some news outlets are publishing articles stating that this claim is based on a new study. Ideas exist independently of whether or not they’ve been published somewhere.

Global Cooling and Wikipedia Fake News. By Andy May There is an excellent new post up at notrickszone.com on the global cooling scare of the 1970’s and the efforts to erase it from the record by the climate alarmists at realclimate.com. 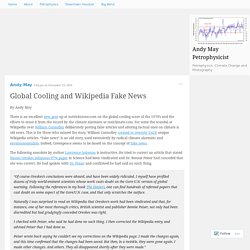 For some the scandal at Wikipedia over William Connolley deliberately posting false articles and altering factual ones on climate is old news. This is for those who missed the story. William Connolley created or rewrote 5,428 unique Wikipedia articles. German Springs Arriving Later As Wikipedia Caught Whitewashing, Disinforming! By Dr. 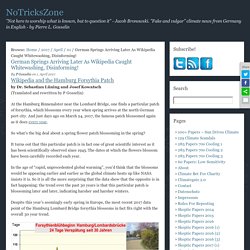 Sebastian Lüning and Josef Kowatsch (Translated and rewritten by P Gosselin) At the Hamburg Binnenalster near the Lombard Bridge, one finds a particular patch of forsythia, which blossoms every year when spring arrives at the north German port city. And just days ago on March 24, 2017, the famous patch blossomed again as it does every year. So what’s the big deal about a spring flower patch blossoming in the spring? It turns out that this particular patch is in fact one of great scientific interest as it has been scientifically observed since 1945. In the age of “rapid, unprecedented global warming”, you’d think that the blossoms would be appearing earlier and earlier as the global climate heats up like NASA insists it is. Despite this year’s seemingly early spring in Europe, the most recent 2017 data point of the Hamburg Lombard Bridge forsythia blossoms in fact fits right with the overall 30 year trend.

Figure 2: February mean temperatures in GERMANY over the past 30 years. Global Cooling and Wikipedia Fake News. Politifact tells us about American politics and science. We should listen. - Fabius Maximus website. Summary: This vignette illustrates important aspects of the climate change debate, and why it has failed to gain sufficient support from Americans to pass large-scale public policy measures. 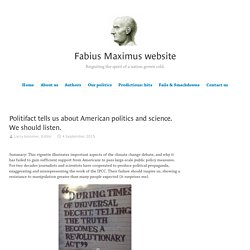 For two decades journalists and scientists have cooperated to produce political propaganda, exaggerating and misrepresenting the work of the IPCC. Their failure should inspire us, showing a resistance to manipulation greater than many people expected (it surprises me). My post, which started this kerfuffle In July I published The 97% consensus of climate scientists is only 47%, which showed the hidden results of an excellent survey of scientists’ agreement with the IPPC’s attribution statements about the role of anthropogenic greenhouse gases in global warming.

It was high, but lower than usually described — and below the standard for significance. Note to Politifact: Obama DID say there is No Greater Threat than Climate Change. Guest essay by Eric Worrall Politifact has just claimed Paul Babeu, the Republican Sheriff of Pinal County, Ariz., who is at the front line of combatting Mexican Drug Cartels encroaching into North America, made a mostly false statement when he claimed President Obama thinks climate change is the number one security threat. 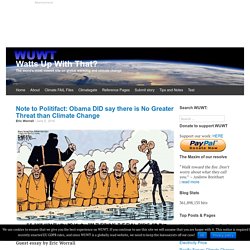 A few minutes web search was all it took, to show that Paul Babeu’s interpretation of President Obama’s statements is entirely reasonable. Paul Babeu, the Republican Sheriff of Pinal County, Ariz., near the U.S. -Mexico border, has repeatedly criticized President Barack Obama’s administration for its lack of border security.Babeu, who’s running for Congress this November against a Republican field that includes David Gowan, Ken Bennett and Wendy Rogers, warned of Mexican drug cartels in his county ahead of Memorial Day weekend on Fox News’ Hannity on May 26.But he also used the interview to make a political jab, questioning Obama’s priorities. Politifact or Politi-fiction. By Andy May This is a critique of the coverage of the man-made climate change debate by Politifact.com. 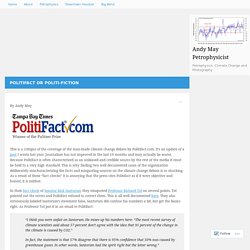 It’s an update of a post I wrote last year. Journalism has not improved in the last 19 months and may actually be worse. Because Politifact is often characterized as an unbiased and credible source by the rest of the media it must be held to a very high standard. This is why finding two well documented cases of the organization deliberately mischaracterizing the facts and misquoting sources on the climate change debate is so shocking. In their fact check of Senator Rick Santorum they misquoted Professor Richard Tol on several points. “I think you were unfair on Santorum. Politifact, like many in the news media, conflate “anthropogenic global warming” (man has some unknown amount of influence on climate) with “catastrophic anthropogenic global warming” (man is driving climate change with his emissions and causing a climate catastrophe). As Professor Tol, Professor Bjorn Lomborg, Dr.