BLOGS ON SELF IMPROVEMENT

This 10-Minute Routine Will Increase Your Clarity And Creativity. Mental Models: The Best Way to Make Intelligent Decisions (109 Models Explained) The Great Mental Models Volumes One and Two are out. Learn more about the project here. This guide explores everything you need to know about mental models. By the time you’re done, you’ll think better, make fewer mistakes, and get better results. Let’s explore the following: What Are Mental Models?

The Velocity of Skill Development: How Brazil Develops Football Players. Brazil figured out how to rapidly increase the velocity of skill development in its football players and it’s not what you think. 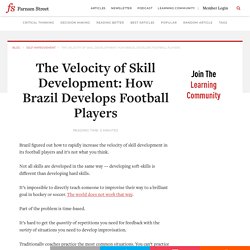 Not all skills are developed in the same way — developing soft-skills is different than developing hard skills. It’s impossible to directly teach someone to improvise their way to a brilliant goal in hockey or soccer. The Discipline Necessary for Self-Assessment is the Key to Success. Camille Sweeney and Josh Gosfield, authors of The Art of Doing: How Superachievers Do What They Do and How They Do It So Well, came out with an op-ed in the New York Times. 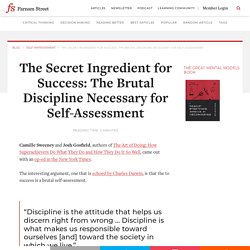 The interesting argument, one that is echoed by Charles Darwin, is that the to success is a brutal self-assessment. “Discipline is the attitude that helps us discern right from wrong … Discipline is what makes us responsible toward ourselves [and] toward the society in which we live.” The Biggest Barrier to Accomplishing Great Things. At some point, we all give up trying to get better at something. 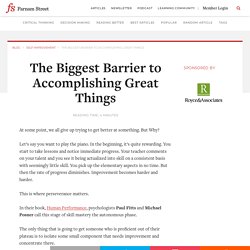 But Why? Let’s say you want to play the piano. Self-Improvement Archives. [This introduction is the first of a four-part series on memory. 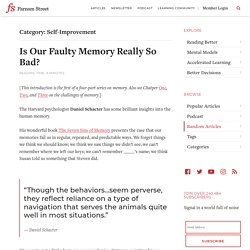 Also see Chatper One, Two, and Three on the challenges of memory.] The Harvard psychologist Daniel Schacter has some brilliant insights into the human memory. His wonderful book The Seven Sins of Memory presents the case that our memories fail us in regular, repeated, and predictable ways. How to Provide Great Feedback When You're Not In Charge. How often do we give deep thought to how we provide feedback to others? 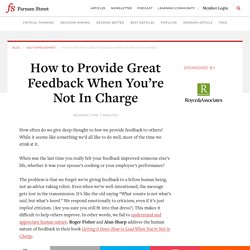 While it seems like something we’d all like to do well, most of the time we stink at it. When was the last time you really felt your feedback improved someone else’s life, whether it was your spouse’s cooking or your employee’s performance? Five Percent Better: The Compounding of Consistent Incremental Progress. Self-motivated, self-starting individuals are incredibly motivated to find their weaknesses. 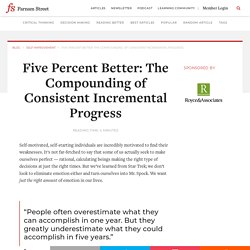 It’s not far-fetched to say that some of us actually seek to make ourselves perfect — rational, calculating beings making the right type of decisions at just the right times. But we’ve learned from Star Trek; we don’t look to eliminate emotion either and turn ourselves into Mr. Spock. We want just the right amount of emotion in our lives. “People often overestimate what they can accomplish in one year. . — Peter Drucker If we’re night owls, we seek to become early risers. This is, of course, a laudable goal and one of the prime reasons for FS’s existence. The culprit, I think, is the thought that any important change happens quickly.

From Potential to Useful And why should it be otherwise? The visual mental model I like for self-improvement is imagining something like a Lathe. A lathe, for the non-engineer, is a tool that molds a piece of material into some shapely form. Is Our Faulty Memory Really So Bad? [This introduction is the first of a four-part series on memory. 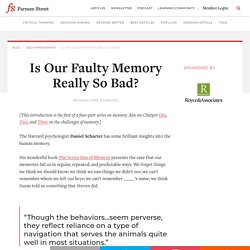 Also see Chatper One, Two, and Three on the challenges of memory.] The Harvard psychologist Daniel Schacter has some brilliant insights into the human memory. His wonderful book The Seven Sins of Memory presents the case that our memories fail us in regular, repeated, and predictable ways. The Many Ways Our Memory Fails Us (Part 1) (Purchase a copy of the entire 3-part series in one sexy PDF for $3.99) Recently, we discussed some of the net advantages of our faulty, but incredibly useful, memory system. 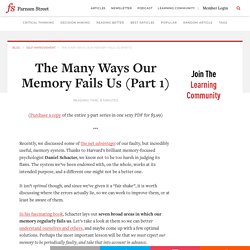 Thanks to Harvard’s brilliant memory-focused psychologist Daniel Schacter, we know not to be too harsh in judging its flaws. The system we’ve been endowed with, on the whole, works at its intended purpose, and a different one might not be a better one. It isn’t optimal though, and since we’ve given it a “fair shake”, it is worth discussing where the errors actually lie, so we can work to improve them, or at least be aware of them. In his fascinating book, Schacter lays out seven broad areas in which our memory regularly fails us. We’re going to cover a lot of ground, so this one will be a multi-parter.

Transience The first regular memory error is called transience. Schacter gives an example of the phenomenon: Try to answer in detail the following three questions: What do you do during a typical day at work? The Many Ways Our Memory Fails Us (Part 2) (Purchase a copy of the entire 3-part series in one sexy PDF for $3.99) 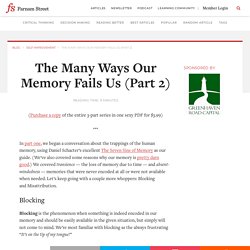 Robert Moses and the Oxygen of Pure Competence. Do you know anyone that’s really, really competent? 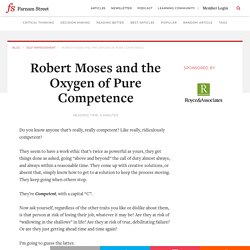 Like really, ridiculously competent? They seem to have a work ethic that’s twice as powerful as yours, they get things done as asked, going “above and beyond” the call of duty almost always, and always within a reasonable time. They come up with creative solutions, or absent that, simply know how to get to a solution to keep the process moving. They keep going when others stop. They’re Competent, with a capital “C”. Now ask yourself, regardless of the other traits you like or dislike about them, is that person at risk of losing their job, whatever it may be? The Difference Between Open-Minded and Closed-Minded People. Why is it that some people seem to make constant progress in their professional and personal lives, while others appear to be doomed to repeat the same mistakes over and over?

While the answer isn’t cut and dry, I’ve noticed an interesting mindset difference between these two groups: they approach obstacles and challenges very differently. It comes down to mindset. Successful people tend to approach life with an open mindset — an eagerness to learn and a willingness to be wrong. The other group digs their heels in at the first sign of disagreement and would rather die than be wrong. It turns out, the way each group approaches obstacles defines much of what separates them. The Difference Between Amateurs and Professionals. Why is it that some people seem to be hugely successful and do so much, while the vast majority of us struggle to tread water? The answer is complicated and likely multifaceted. One aspect is mindset—specifically, the difference between amateurs and professionals. Most of us are just amateurs. Becoming an Expert: The Elements of Success.

We’re massively impressed by a concert pianist, or a wide receiver, or a truly skillful visual artist. Their abilities seem otherworldly. But what makes these people so skillful? How did they start out like you and I and then become something so extraordinary? Part of us wants to believe that it’s something innate and magical, so we can recuse ourself from hard work. The other part of us wants to believe that it’s something earned through blood, sweat, and tears — that we too could achieve amazing performance, if only we could devote ourselves to something. Self-Improvement Archives. Do you know anyone that’s really, really competent? Like really, ridiculously competent? They seem to have a work ethic that’s twice as powerful as yours, they get things done as asked, going “above and beyond” the call of duty almost always, and always within a reasonable time.