Researchers develop a new model for how the brain processes complex information. The human brain is a highly advanced information processor composed of more than 86 billion neurons. 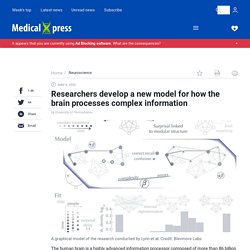 Humans are adept at recognizing patterns from complex networks, such as languages, without any formal instruction. Previously, cognitive scientists tried to explain this ability by depicting the brain as a highly optimized computer, but there is now discussion among neuroscientists that this model might not accurately reflect how the brain works. Now, Penn researchers have developed an different model for how the brain interprets patterns from complex networks. Published in Nature Communications, this new model shows that the ability to detect patterns stems in part from the brain's goal to represent things in the simplest way possible. Their model depicts the brain as constantly balancing accuracy with simplicity when making decisions.

To test their hypothesis, the researchers ran a set of experiments similar to a previous study by Kahn. USA Memory Champion Nelson Dellis: How to improve your memory. In 2009, after Nelson Dellis’s grandmother Josephine passed away from Alzheimer’s disease (which may have a hereditary component), he was inspired to find ways to keep his own brain healthy and sharp. 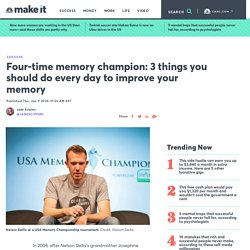 “I was a good student, but my memory was average,” Dellis, 35, tells CNBC Make It. Dellis scoured the internet looking for tips to improve his memory and joined a few forums where professional “memory athletes” (people who train their memory skills for high performance) chatted about different memory techniques. Then he listened to “Quantum Memory: Learn to Improve Your Memory with The World Memory Champion,” an audiobook by Dominic O’Brien, a seven-time world memory champion. “After that, I went off and, through trial and error, figured out what [techniques] worked well for me,” Dellis says. Today Dellis, author of the book “Remember It” and a four-time USA Memory Champion (an annual competition for elite mental athletes), is a full-time memory coach based in Miami, Florida. 1. 2.

SCORM Cloud: Test, Play and Distribute eLearning. Bitsbox. Spangler Science Club - Monthly Fun Hands-on STEM Kits for Kids‎ Save on 4 years old, 3 years old. 6 Best Subscription Boxes for Kids: Bitsbox, Foodstirs, and More. Memory & Learning Breakthrough: It Turns Out That The Ancients Were Right. Have you ever wondered… What’s the fastest, most effective way to learn? 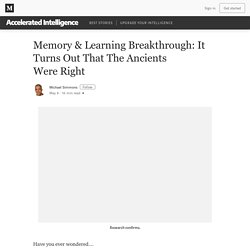 What’s the secret to remembering what you learn? When it comes to learning how to learn, these are the big questions. If you have a better answer to them, you will be more successful. Period. Learning faster than others is the ultimate, lasting competitive advantage. “Without Warren Buffett being a learning machine, the [Berkshire Hathaway investing] record would have been absolutely impossible.

This is why I’ve spent the last several years researching, writing about, and teaching the subject of learning how to learn to thousands of students and more than ten million readers. As time has passed, a few methods have proven particularly life-changing and have now become pillars of my daily learning routine. This article introduces a fifth pillar that is both profound and obvious. The idea is simple: Teach what you learn — as soon as you learn it.

Introducing The Explanation Effect. Early Childhood Education: The Superfuture of Humanity. The 50/50 Rule (How to Retain And Remember 90% of Everything You Learn) We Learn by Doing: What Educators Get Wrong About Bloom's Taxonomy. How to learn how to learn. Mental Models I Find Repeatedly Useful. How to Change Your Brain to Re-invent Yourself and Improve Your Performance. Learning a new skill seems like a breeze for other people. 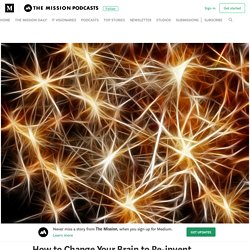 You’ve seen bloggers who dominate the internet. They weren’t really writers. They didn’t even know they can write. Wired for memory: how your brain remembers by completing patterns. You’re a beautiful machine. 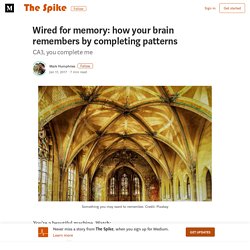 Watch: “To be or not to __” How Your Brain Decides What You’re Seeing – Theories of Mind. Your brain makes most of its decisions without bothering to consult with you. 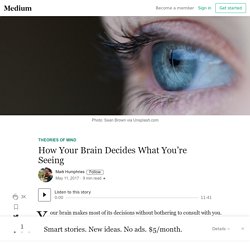 Some are trivial: If you had to decide which foot to put down first each and every time you started walking somewhere, you’d be mentally exhausted. So your brain (and body) decide for you, and off you go. Some of these decisions are not so trivial. The amazing phenomenon of muscle memory – Oxford University. If you live in Oxford, cycling is difficult to avoid. 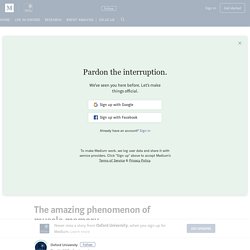 But as anyone new to the city can attest, hopping back on a saddle for the first time in years to weave through the narrow busy streets can be a daunting prospect. Luckily, the old saying holds true: it really is like learning to ride a bike. Many people will have experienced this phenomenon before, the amazing and long-lasting memory for skills that is often known as muscle memory. Information & Knowledge Management. Information Overload? Overcome It with Minimalist Journaling. Have you ever found yourself doing research or trying to learn about something and feeling overwhelmed with the amount of information and contradicting opinions you find on the subject? 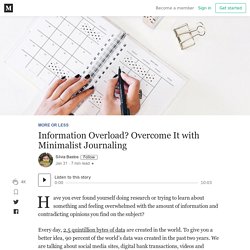 Every day, 2.5 quintillion bytes of data are created in the world. To give you a better idea, 90 percent of the world’s data was created in the past two years. We are talking about social media sites, digital bank transactions, videos and pictures and texts, your own personal data that gets stored in online shops, and so much more. And this is just the digital world. Think about how many billboards you see on your way to work, how many products you have to ignore on the supermarket shelves during your weekly shopping, and how many objects and faces and pieces of news your brain processes every single day of your life. Two Techniques to Help You Learn Better – Blake Gossard. I’ve found that one of the most effective ways to learn new concepts is to employ a combination of two memorization techniques: elaborative encoding and overlearning. 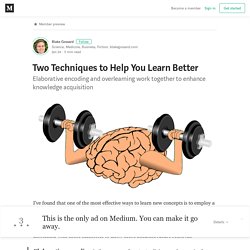 These techniques, when used together, may be the most effective way to encode memory into long-term storage and reinforce the neuronal circuitry associated with those memories to allow more accurate future retrieval. Elaborative encoding is the process of contextualizing newly acquired information within a framework of existing knowledge and memories to give the new information coherence and meaning. Overlearning entails continuous and repeated review of the new concepts, preferably from multiple sources and different perspectives, even when we feel we already understand them. Learning From the Feynman Technique – Taking Note. They called Feynman the “Great Explainer.” 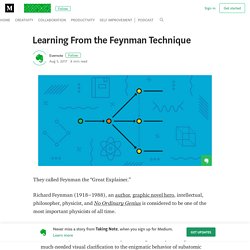 Richard Feynman (1918–1988), an author, graphic novel hero, intellectual, philosopher, physicist, and No Ordinary Genius is considered to be one of the most important physicists of all time. He pioneered an entire field: quantum electrodynamics (QED).In the 1940s, his invention of the Feynman Diagram helped bring much-needed visual clarification to the enigmatic behavior of subatomic particles.His work helping scientists understand the interaction of light and matter earned him a share of a Nobel Prize in 1965.His work has directly influenced the fields of nanotechnology, quantum computing, and particle physics.In 1986, his research and explanations were critical in helping to understand the cause of the space shuttle Challenger disaster. In addition to his groundbreaking research, Feynman was brilliant, eloquent, and an exquisitely passionate thinker. The Feynman Technique You’re not alone.