« The definition of insanity is doing the same thing over and over and expecting different results.

"Mental models allow you to view the world through more tried, tested, and unbiased lenses, and help find solutions to problems that might be out of your personal sphere of experience." Deanna deBara

In a nutshell, mental models can help us think beyond our own personal experience and provide a kind of mental “shortcut,” making it easier, faster, and more efficient to find solutions for problems.

What's A Mental Model? Your Shortcut To Being More Productive, More Often. Everyone has their own way of looking at the world. 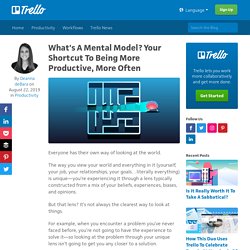 The way you view your world and everything in it (yourself, your job, your relationships, your goals…literally everything) is unique—you’re experiencing it through a lens typically constructed from a mix of your beliefs, experiences, biases, and opinions. But that lens? It’s not always the clearest way to look at things. For example, when you encounter a problem you’ve never faced before, you’re not going to have the experience to solve it—so looking at the problem through your unique lens isn’t going to get you any closer to a solution. And that’s where mental models come in. Mental models allow you to view the world through more tried, tested, and unbiased lenses, and help find solutions to problems that might be out of your personal sphere of experience. Not only can they be incredibly helpful in giving you deeper insights into the world around you, they can also be extremely useful at taking your career to the next level.

Mental Models: Learn How to Think Better and Gain a Mental Edge. Mental Models I Find Repeatedly Useful. Reading. The Forms of Thinking. Cognitive Bias. Great Opportunities. Problem Solving Methods. Divergent Thinking. Goal Setting. Inversion: The Crucial Thinking Skill Nobody Ever Taught You. The ancient Stoic philosophers like Marcus Aurelius, Seneca, and Epictetus regularly conducted an exercise known as a premeditatio malorum, which translates to a “premeditation of evils.” 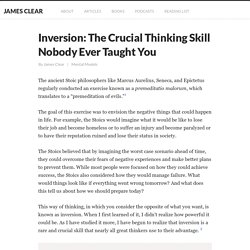 The goal of this exercise was to envision the negative things that could happen in life. For example, the Stoics would imagine what it would be like to lose their job and become homeless or to suffer an injury and become paralyzed or to have their reputation ruined and lose their status in society. The Stoics believed that by imagining the worst case scenario ahead of time, they could overcome their fears of negative experiences and make better plans to prevent them.

While most people were focused on how they could achieve success, the Stoics also considered how they would manage failure. What would things look like if everything went wrong tomorrow? This way of thinking, in which you consider the opposite of what you want, is known as inversion. How Great Thinkers Shatter the Status Quo Productivity. 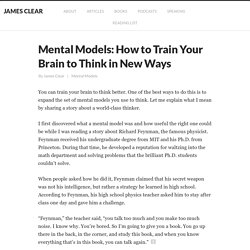 One of the best ways to do this is to expand the set of mental models you use to think. Let me explain what I mean by sharing a story about a world-class thinker. I first discovered what a mental model was and how useful the right one could be while I was reading a story about Richard Feynman, the famous physicist. Feynman received his undergraduate degree from MIT and his Ph.D. from Princeton. During that time, he developed a reputation for waltzing into the math department and solving problems that the brilliant Ph.D. students couldn’t solve. When people asked how he did it, Feynman claimed that his secret weapon was not his intelligence, but rather a strategy he learned in high school. “Feynman,” the teacher said, “you talk too much and you make too much noise. So each day, Feynman would hide in the back of the classroom and study the book—Advanced Calculus by Woods—while the rest of the class continued with their regular lessons.