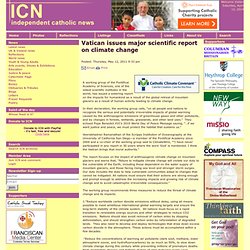 In their declaration, the working group calls, “on all people and nations to recognize the serious and potentially irreversible impacts of global warming caused by the anthropogenic emissions of greenhouse gases and other pollutants, and by changes in forests, wetlands, grasslands, and other land uses.” They echoed Pope Benedict XVI’s 2010 World Day of Peace Message saying, “…if we want justice and peace, we must protect the habitat that sustains us.” The working group recommends three measures to reduce the threat of climate change and its impacts: 1. . 3. KPMG Says 'Hidden' Environmental Costs to Double Every 14 Years. Global Partnership for Oceans. Clouds dropping closer to Earth. Updated Sun 26 Feb 2012, 12:09pm AEDT New research has found clouds are dropping closer to the Earth, with scientists measuring their height for the first time on a global basis. 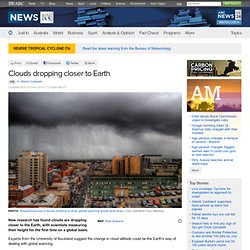 Experts from the University of Auckland suggest the change in cloud altitude could be the Earth's way of dealing with global warming. In 1999, NASA launched its Terra satellite into space. On board was a Multi-angle Imaging Spectroradiometer (MISR). It uses nine cameras at different angles to produce a stereo image of clouds around the world, allowing measurement of their altitude and movement.

Researchers at the university studied the measurements taken over a decade. Lead researcher Professor Roger Davies says over the past 10 years clouds have lowered in altitude. "About 30 to 40 metres, just depending on how you did it. He says researchers are unsure why it is happening, but that it is most likely due to a change in the circulation of the atmosphere. "It could be just a one-off.

‘Act early, act local’ to save landscapes. Researchers warn that the listed environments are all at risk of reaching 'tipping points'. 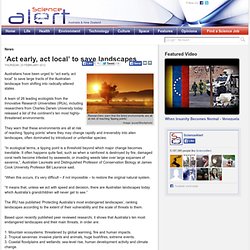 Image: juuce/iStockphoto Australians have been urged to “act early, act local” to save large tracts of the Australian landscape from shifting into radically-altered states. A team of 26 leading ecologists from the Innovative Research Universities (IRUs), including researchers from Charles Darwin University today released a list of the continent’s ten most highly-threatened environments.

They warn that these environments are all at risk of reaching ‘tipping points’ where they may change rapidly and irreversibly into alien landscapes, often dominated by introduced or unfamiliar species. “In ecological terms, a tipping point is a threshold beyond which major change becomes inevitable. “When this occurs, it’s very difficult – if not impossible – to restore the original natural system. 1.

“Australians naturally love the Australian landscape. Editor's Note: Original news release can be found here. Climate change is set to shake the earth. The idea that a changing climate can persuade the ground to shake, volcanoes to rumble and tsunamis to crash on to unsuspecting coastlines seems, at first, to be bordering on the insane. How can what happens in the thin envelope of gas that shrouds and protects our world possibly influence the potentially earth-shattering processes that operate deep beneath the surface?

The fact that it does reflects a failure of our imagination and a limited understanding of the manner in which the different physical components of our planet - the atmosphere, the oceans, and the solid earth, or geosphere - intertwine and interact. If we think about climate change at all, most of us do so in a very simplistic way: so, the weather might get a bit warmer; floods and droughts may become more of a problem and sea levels will slowly creep upwards. The world we inhabit has an outer rind that is extraordinarily sensitive to change. Advertisement The signs are that this is already happening.