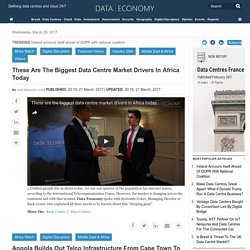 China Telecom Global (CTG) has chosen colocation company Djibouti Data Center (DDC) to further its network expansion, co-location and submarine fiber cable access services in East Africa. CTG is the international operating subsidiary of China Telecom Corporation (China Telecom). The move will allow CTG to serve its multinational corporation clients and carrier partners in Djibouti, Ethiopia and other countries in the region. The DDC has been built to Tier III data centre standards and also serves as a meeting point for submarine fiber cable systems including the new Southeast Asia-Middle East — Western Europe (SEA-ME-WE 5) submarine cable designed to connect Asia, the Middle East, Africa and Western Europe. China Telecom Global is a founding member of the consortium for SEA-ME-WE 5, which is expected to be ready for service in late 2016. Data Is the New Frontier As African Telecom Firms Battle. Africa: Over 90% of the Continent Has No Internet Access. By Obinna Chima The internet is one of the most important enablers of social development and education. 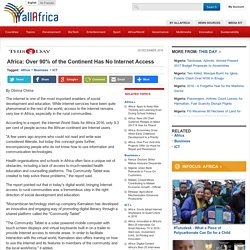 While internet services have been quite phenomenal in the rest of the world, access to the Internet remains very low in Africa, especially in the rural communities. According to a report, the Internet World Stats for Africa 2016, only 9.3 per cent of people across the African continent are Internet users. "A few years ago anyone who could not read and write was considered illiterate, but today this concept goes further, encompassing people who do not know how to use information and communication technologies. 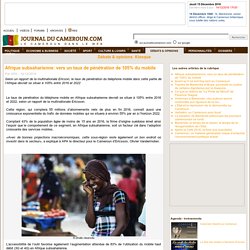 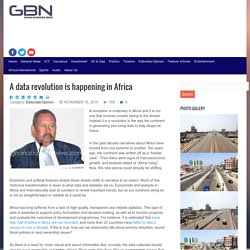 Instead it is a revolution in the way the continent is generating and using data to help shape its future. Forbes Welcome. Vers la création d’une organisation africaine des agences gouvernementales en charge des TIC. Africa To Surpass 1bn Mobile Subscriptions - Report - Reports Afrique News. Africa is expected to cross one billion mobile subscriptions in the fourth quarter of 2016, reaching 1.02 billion by year-end. 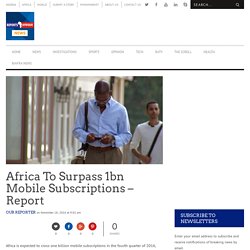 This is according to market research and advisory firm Ovum, which also forecasts the total number of mobile subscriptions on the continent will rise to 1.33 billion at the end of 2021. Internet Monopolies Could Be Ending in Africa. Telecom workers in Burkina Faso were on strike again this month, leading to phone and internet interruptions. 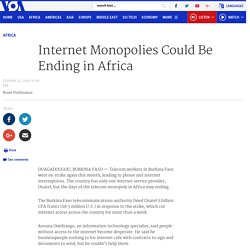 The country has only one internet service provider, Onatel, but the days of the telecom monopoly in Africa may ending. The Burkina Faso telecommunications authority fined Onatel 5 billion CFA francs ($8.5 million U.S.) in response to the strike, which cut internet access across the country for more than a week. Arouna Ouédraogo, an information technology specialist, said people without access to the internet become desperate. He said he businesspeople rushing to his internet cafe with contracts to sign and documents to send, but he couldn't help them. Nairobi gets world's 4th GSM Roaming Exchange. Published on 16 September 2016. 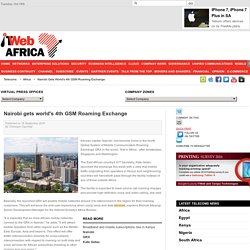 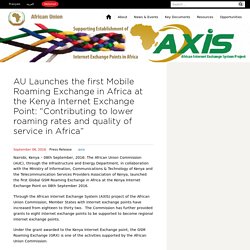 Through the African Internet Exchange System (AXIS) project of the African Union Commission, Member States with internet exchange points have increased from eighteen to thirty two. The Commission has further provided grants to eight internet exchange points to be supported to become regional internet exchange points. Under the grant awarded to the Kenya Internet Exchange point, the GSM Roaming Exchange (GRX) is one of the activities supported by the African Union Commission. Dr. Catherine Getao, ICT Secretary, representing the Hon. The GDP Impact of Mobile Networks [2010 Data] by Country. IP traffic set to soar in Africa. Published on 14 June 2016 By Chris Tredger Africa will experience the highest IP growth rate globally at 41%, according to the Cisco Visual Network Index Complete Forecast for 2015 to 2020. 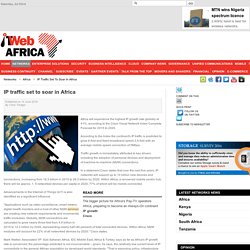 According to the Index the continent's IP traffic is predicted to grow 6-fold and fixed broadband speed 2.4-fold with an average mobile speed connection of 5Mbps. Traffic growth is immediately attributed to key drivers including the adoption of personal devices and deployment of machine-to-machine (M2M) connections. In a statement Cisco states that over the next five years, IP networks will support up to 10 billion new devices and connections, increasing from 16.3 billion in 2015 to 26.3 billion by 2020. Africa – Mobile Voice and Mobile Broadband Statistics (tables only) NEW YORK, May 26, 2016 /PRNewswire/ — African mobile internet traffic expected to increase 20-fold by the end of the decadeAfrica’s diverse mobile market is characterised by having a small number of mobile players with footprints across multiple countries. 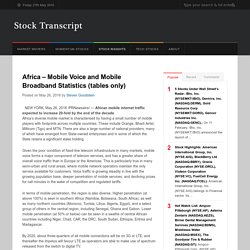 These include Orange, Bharti Airtel, Millicom (Tigo) and MTN. There are also a large number of national providers, many of which have emerged from State-owned enterprises and in some of which the State retains a significant stake holding. Given the poor condition of fixed-line telecom infrastructure in many markets, mobile voice forms a major component of telecom services, and has a greater share of overall voice traffic than in Europe or the Americas. This is particularly true in many semi-urban and rural areas, where mobile network operators maintain the only service available for customers. Africa's continental opportunity for digital and technology.

Over the last 16 years, I have had the pleasure of travelling across Africa and during this time I've witnessed many things change. I have seen air conditioners installed in Lagos airport which, to my knowledge, are still not functional. The Botswana pula became stronger than the South African rand. I have seen the Ghanaian cedi depreciate weekly to the US dollar, affecting households and businesses in ways they have yet to feel, and I’ve seen the Gaborone airport take shape.

Programme de l’événement : Mobiles Speed Up Financial Inclusion In Africa. A study of five countries in Sub-Saharan Africa reveals 63 per cent of respondents are unbanked, and 52 per cent use mobile money through agents. Twenty per cent of the population use mobile money services on a mobile phone, and half of these people are unbanked. Among lower socioeconomic groups in Sub-Saharan Africa, four out of 10 people lack basic prerequisites for starting their own mobile money account. The Financial Services for Everyone Ericsson ConsumerLab report, which looked at five countries: Angola, Democratic Republic of Congo, Ghana, Nigeria and Uganda, said even as mobile money services become part of daily life for millions in Sub-Saharan Africa, many potential customers face basic barriers to accessing the services on their own mobile phones.

Lack of awareness and basic prerequisites, and low appreciation of the benefits are some of the hurdles. According to the findings, 63 per cent of adults in the region have no bank account. Satellite TV growing fast in West Africa. February 3, 2016 Research revealed in the annual Africascope report produced by TNS Sofres shows a buoyant TV market in French-speaking African countries and the increasing marketshare of the Eutelat 16A satellite, one of the key TV satellites for West Africa.

The research analyses overall media trends in 4.2 million TV homes, representing 18.6 million people living in capital and economic cities in seven West African countries. TV is the dominant media in all markets with average viewing ranging between three and 4.5 hours a day. Multi-channel viewing and flat screen ownership are gaining ground in these key urban areas, both already accounting for over 30 per cent of TV homes and underscoring the transition to a digital broadcasting environment.

For 40 per cent of the TV homes surveyed, satellite TV follows analogue terrestrial as the most popular choice for TV viewing. Africa: Children in Refugee Camps to Benefit From Vodafone's Instant Classroom Lite Platform. By Lilian Mutegi The Vodafone Foundation has introduced Instant Classroom lite platform, an interactive classes targeting schools without power or internet access. The platform is designed for teaching lessons to large class sizes in refugee camps.

It includes a server with mobile educational content that teachers can access locally. Vodafone Foundation Director Andrew Dunnet said, "Instant Classroom Lite builds on our Instant Network Schools programme, which has already provided an internet education to around 60,000 young refugees living in Dadaab Refugee camp. " The Instant Classroom Lite kit has a projector and audio system, 3G and 4G connectivity and a laptop server preloaded with educational content. Africa's Biggest Data Centre Coming. By Staff Writer In a build comprising 17 500sqm, Teraco, Africa's vendor neutral data centre - Teraco, is adding to its existing colocation facility to create Africa's largest data centre. Gys Geyser, Head of Operations - Teraco, says the build is not just an extension of services and white space, but a milestone for Teraco and the African data centre industry: "In this expansion of our footprint, we are achieving what few companies have; building the largest data centre in Africa in accordance with modern international standards.

" Geyser says that the build brings the total size of the Isando facility to 9000sqm of white space and 18 500sqm of utility space. He says that the volume of data centre space is directly related to the power feed negotiated with the local council: "We now have a total of 16MVA of power, which will ensure that we can adequately power the all the data centres, as well as ensure that they are properly cooled and maintained. " Africa's Phone Users Reach 700 Million. By Christabel Ligami Mobile phone subscriptions are now almost eight times higher in Africa than in 2000, reaching about 700 million. According to a report by the International Telecommunication Union (ITU), mobile technology has played a crucial role in promoting financial inclusion in sub-Saharan Africa, where less than 20 per cent of households have access to formal financial services.

The liberalisation of the communications sector in many African countries has also enabled leading global telecom providers to expand their brands and compete for market share. Their strategies have included partnering with smaller manufacturers to develop more affordable mobile devices. Millicom's Africa CEO Cynthia Gordon thinks the mobile market on the continent still has room to grow. Africa: Mobile Phone Access Explodes Across Africa. Cape Town — The overwhelming majority of Africans - more than nine in every 10 people - now have access to mobile phones, says a new Afrobarometer survey of the continent's infrastructure. The huge growth in the industry means that far more people have access to cellphones than to an electricity grid, paved or tarred roads, piped water or sewerage.