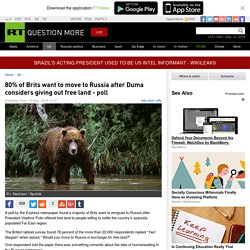 The British tabloid survey found 78 percent of the more than 22,000 respondents replied “Yes! Bargain” when asked: “Would you move to Russia in exchange for free land?” 11yo Alabama boy shoots intruder, mocks him for ‘crying like a baby’ (VIDEO) — RT America. An 11-year-old boy from Talladega, Alabama, boasted about shooting at a fleeing burglar 12 times and mocked the man (whom he had wounded in the leg) for “crying like a baby”. 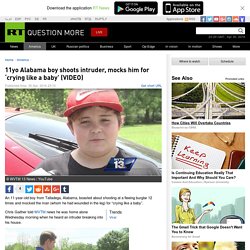 Chris Gaither told WVTM news he was home alone Wednesday morning when he heard an intruder breaking into his house. Gaither grabbed a 9mm handgun and began shooting at the burglar when he started to leave the house with a stolen hamper in-hand. Chris opened fire, shooting at the man 12 times, eventually hitting the intruder in the leg with a “metal jacket bullet” on the final shot as he attempted to climb a fence surrounding their property.

“I told him I was gonna kill him with a gun if he didn’t get out of my house”, Gaither told the news channel. READ MORE: Wisconsin police shot hostage without warning, video shows. American Hegemon’s Bankruptcy is Only a Matter of Time…the Nearest Time. © AP Photo/ Richard Drew, File F. 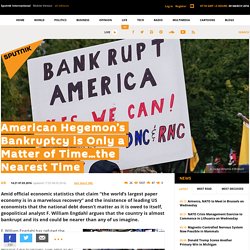 William Engdahl has refuted the claims of leading US economists, including Noble Economics Prize winning Paul Krugman, that debt in an economy, especially the world’s most debt-bloated economy, the United States “doesn’t matter,” as it, to a large extent, owes money to itself. “Today the US financial economy is going into a new downward spiral led by debt,” the geopolitical analyst, who is also a strategic risk consultant and lecturer with a degree in politics from Princeton University, writes in his article for the New Eastern Outlook.

The author elaborates that indebted American consumers are the main reason for such a pathetic state of the country’s economy. He cites the results of a recent study which revealed that in 2015 the average American household had $129,579 in debt — $15,355 of it on high-interest credit cards. Chainsaw Maintenance Tips: Keep That Saw Running Right - Modern Homesteading. If you're a chainsaw owner, you're probably well aware of your machine's enormous potential for chewing through raw timber. 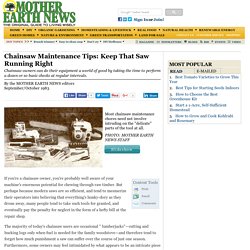 But perhaps because modern saws are so efficient, and tend to mesmerize their operators into believing that everything's hunky-dory as they drone away, many people tend to take such tools for granted, and eventually pay the penalty for neglect in the form of a hefty bill at the repair shop. The majority of today's chainsaw users are occasional " lumberjacks"—cutting and bucking logs only when fuel is needed for the family woodstove—and therefore tend to forget how much punishment a saw can suffer over the course of just one season. Furthermore, some owners may feel intimidated by what appears to be an intricate piece of machinery, and perhaps don't realize that most maintenance chores need not involve intruding on the "delicate" parts of the tool at all.

The United States just hit $19 TRILLION in debt… - ValueWalk. On October 22, 1981, the national debt in the United States of America hit $1 trillion for the first time in history. 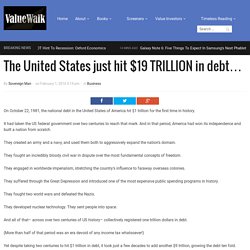 It had taken the US federal government over two centuries to reach that mark. And in that period, America had won its independence and built a nation from scratch. Global financial meltdown worse than Great Depression to hit in 2016. FEARS: The world is facing an uncertain economic future 2016 has only just begun but economists are fearing this is the year of a massive global recession. 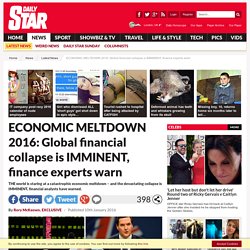 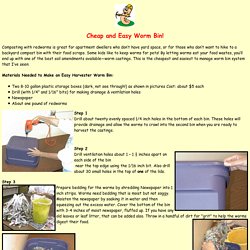 Composting with redworms is great for apartment dwellers who don’t have yard space, or for those who don’t want to hike to a backyard compost bin with their food scraps. Some kids like to keep worms for pets! By letting worms eat your food wastes, you’ll end up with one of the best soil amendments available—worm castings. This is the cheapest and easiest to manage worm bin system that I’ve seen: Materials Needed to Make an Easy Harvester Worm Bin: 'We may be breaking codes, but not supreme law of the land' - Bundy (EXCLUSIVE) On the 10th day of an armed standoff on federal property near Burns, Oregon, the leader of a rancher militia, Ammon Bundy, said he and his supporters “are breaking codes and regulations, but we are not breaking the supreme law of the land.” 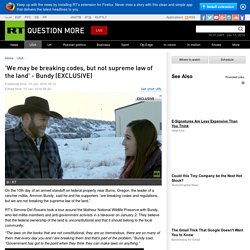 RT’s Simone Del Rosario took a tour around the Malheur National Wildlife Preserve with Bundy, who led militia members and anti-government activists in a takeover on January 2. They believe that the federal ownership of the land is unconstitutional and that it should belong to the local community. Compost at lightning speed with a bucket worm farm! - All. Metal Melting Points – A guide to melting metals. For those wondering about melting metals – well, now you know. 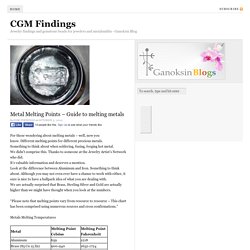 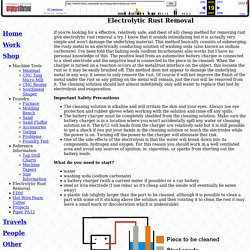 I know that it sounds intimidating but it is actually very simple and won't damage the underlying material. This method basically consists of submerging the rusty metal in an electrically conducting solution of washing soda (also known as sodium carbonate). I've been told that baking soda (sodium bicarbonate) also works but I have no personal knowledge of this. How to tie the Prusik Knot. History: The Prusik knot was developed in 1931 by Dr.Karl Prusik (sometime president of the Austrian Mountaineering Club and often misspelled "Prussik".) It appears to be identical in structure to a knot described by Ashley for hoisting a spar. FOUNDRY101.COM. Methods to Determine Direction - Geek Prepper. Are one of those people, who can’t tell which way is north, without a compass? Then it’s time to develop your direction finding skills! Here are some handy, simple methods to determine direction!

Sun On Earth, the Sun rises in the East and sets in the West. You can use this knowledge to help you find direction! Shadow. Using a map and compass - Geek Prepper. It’s so easy to pull out your smart phone and use a map app or GPS app to navigate to your chosen destination. What if GPS ceases to function, or if you want to avoid being tracked by your cell phone carrier?

Using a map and compass is a fool proof system to find your way. Using a map and compass. Pace counting with Ranger Beads - Geek Prepper. With the advent of GPS systems, navigating with a map have almost become a lost skill. Build An Off Grid Wind Generator Out Of A Truck Alternator. Custom Made Survival Hiking Stick 2.0 by Natural-Is-Stick. Revolution Ready: Designers invent protest toolkit. Protesters involved in civil disobedience have a new toolkit in their fight against the growing police and surveillance state. 2025. List of Countries Forecast 2025. There have been many questions about the countries forecast specially the one focusing on the United States of America (USA). SALT Self-Defense Gun. The home defense discussion, particularly when it comes to guns, is very heated. Gun Groups Enraged at Obama's Rant After Oregon Shooting. Gun rights groups Thursday slammed President Barack Obama for using the Oregon community college shooting to push for more gun control, with Dave Dalton of the American Gun Owners Alliance telling Newsmax that "I literally screamed at the TV set" as the president spoke.

America's War for Global Domination. America's War for Global Domination. ESA and NASA Will Try to Smash an Asteroid Out of Its Orbit in 2022. The DoomsDay VAULT - Secure your seeds - Svalbard Global Seed Vault (Norway) Counter Jade Helm. CBO: Debt Headed to 103% of GDP; Level Seen Only in WWII; 'No Way to Predict Whether or When' Fiscal Crisis Might Occur Here. CBO Director Keith Hall (Screen capture) (CNSNews.com) - Testifying in the U.S Senate yesterday, Congressional Budget Office Director Keith Hall warned that the publicly held debt of the U.S. government, when measured as a percentage of Gross Domestic Product, is headed toward a level the United States has seen only once in its history—at the end of World War II.

To simply contain the debt at the high historical level where it currently sits—74 percent of GDP--would require either significant increases in federal tax revenue or decreases in non-interest federal spending (or a combination of the two). Historically, U.S. government debt held by the public, measured as a percentage of GDP, hit its peak in 1945 and 1946, when it was 104 percent and 106 percent of GDP respectively. In 2015, the CBO estimates that the U.S. government debt held by the public will be 74 percent of GDP. Is a mini ICE AGE on the way? Scientists warn the sun will 'go to sleep' in 2020. Almost everything you need to survive in the woods is in the SURVCO Tactical Credit Card Axe. Zimbabwe offers new exchange rate: $1 for 35,000,000,000,000,000 old dollars. A U.S. Citizen is 58 Times More Likely to be Killed by a Police Officer than a Terrorist.