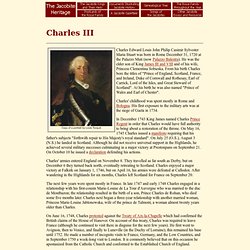 Charles III 'The Young Pretender' Early life[edit] Charles was born in the Palazzo Muti, Rome, Italy, on 31 December 1720, where his father had been given a residence by Pope Clement XI. 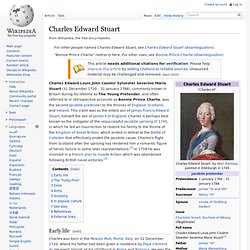 He spent almost all his childhood in Rome and Bologna. He was the son of the Old Pretender, Prince James, son of exiled Stuart King, James II of England and his wife Maria Clementina Sobieska and great-grandson of John III Sobieski, most famous for the victory over the Ottoman Turks in the 1683 Battle of Vienna. His childhood in Rome was one of privilege, being brought up Catholic in a loving but argumentative family. 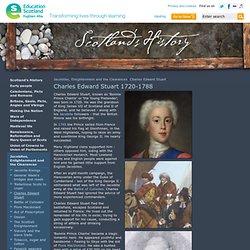 He was the grandson of King James VII of Scotland and II of England, and he believed - along with his Jacobite followers - that the British throne was his birthright. In 1745 the Prince sailed from France and raised his flag at Glenfinnan, in the West Highlands, hoping to raise an army and overthrow King George II. He nearly succeeded.

Many Highland clans supported him - others opposed him, siding with the Hanoverian monarch. Most Lowland Scots and English people were against him and he gained little support from English Jacobites. Bonnie Prince Charlie. Charles Edward Stuart (1720 - 1788) also known as"Bonnie Prince Charlie", the "Young Pretender" or "Teàrlach Eideard Stiùbhairt" in the Gaelic, was born, in Rome, on the 31st of December 1720, the eldest son of James Francis Edward Stuart, the "Old Pretender" or "Old Chevalier" and Mary Clementina of Poland. 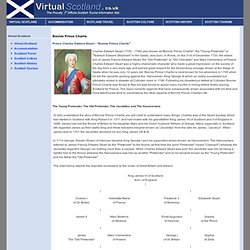 Charles Edward Stuart was a highly charismatic character who made a great impression on the society of the day from a very early age and earned great respect for the tremendous courage shown at the Siege of Gaeta when he was only 14 years old. Bonnie Prince Charlie is most known for his adventure in 1745 when he led the Jacobite uprising against the, Hanoverian, King George III which so nearly succeeded but ultimately ended in disaster at Culloden moor in 1746. Following his disasterous defeat at Culloden Bonnie Prince Charlie was forced to flee but was forced to spend many months in hiding before finally leaving Scotland for France. 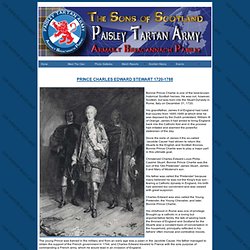 The English government imposed strict laws, especially targeting the Clans. These included making it illegal for Highlanders to carry instruments of War (e.g. swords, targes and bagpipes) or to wear the tartan and the kilt. Jacobite supporters were either executed or forced to emigrate and their land was turned over to George II who distributed it amongst his English supporters. The 'Highland Clearances' also became law, where landowners now found it more profitable to keep sheep on land that had always been used for farming. Many Highlanders now found themselves without a home and there was a surge of people moving from the country to the new, emerging cities. Culloden thus changed the ancient Clan system forever.

Bonnie Prince Charlie leader of the 1745 Jacobite uprising. When James II of Britain (VII of Scotland) was deposed in 1688 a movement sprang up to return the Stuart line to the throne, supporters of this movement were known as Jacobites. 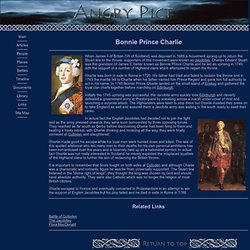 Charles Edward Stuart was the grandson of James II, better known as Bonnie Prince Charlie and he led an uprising in 1745 with the support of a number of Highland clans which attempted to regain the throne. Charlie was born in exile in Rome in 1720. His father had tried and failed to reclaim the throne and in 1743 the mantle fell to Charlie when his father named him Prince Regent and gave him full authority to act in his name. In 1745 Bonnie Prince Charlie landed on the small island of Eriskay and gathered the loyal clan chiefs together before marching on Edinburgh. Initially the 1745 uprising was successful, the Jacobite army quickly took Edinburgh and cleverly defeated a government army at Prestonpans by sneaking across a marsh under cover of mist and launching a surprise attack. Related Links. About the Jacobites and Bonnie Prince Charlie. We've all heard about the Jacobite uprisings and Bonnie Prince Charlie but what is the history behind this? 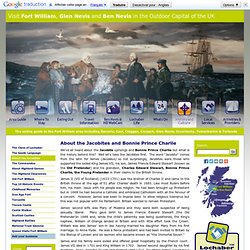 Well let's take the Jacobites first. The word "Jacobite" comes from the latin for James (Jacobeus) so not surprisingly, Jacobites were those who supported the exiled King James VII, his son, James Francis Edward Stewart (known as the Old Pretender) and his grandson, Charles Edward Stewart, Bonnie Prince Charlie, the Young Pretender in their claims to the British throne. James II (VII of Scotland) (1633-1701) was the brother of Charles II and came to the British throne at the age of 51 after Charles' death in 1685. Like most Rulers before him, his main issue with his people was religion. He had been brought up Protestant but in 1668 he had become a Catholic and embraced Catholisim with all the fervour of a convert. James' second wife was Mary of Modena and they were both suspected of being sexually liberal. However, the Stewarts did not give up easily. Prince Charles Edward Stuart (Bonnie Prince Charlie) Bonnie Prince Charlie - Biography on Bio. 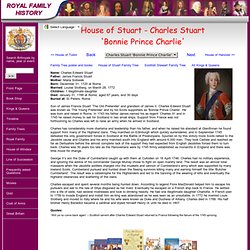 Charles Edward Stuart was known as ‘The Young Pretender’ and by his Scots supporters as ‘Bonnie Prince Charlie’. He was born and raised in Rome. In 1743 his father James named his as regent ‘Charles III’ and in 1745 he raised money to sail for Scotland in two small ships. Charles has considerably more charisma and leadership than his father, and when he raised his standard at Glenfinnan he found support from many of the Highland clans. George II’s son the Duke of Cumberland caught up with them at Culloden on 16 April 1746. Quotes: The Young Pretender (Bonnie Prince Charlie) : Scotland Magazine Issue 31. In the latest part of our series looking at Scottish characters, Mark Nicholls sets off to find out more about Bonnie Prince Charlie. 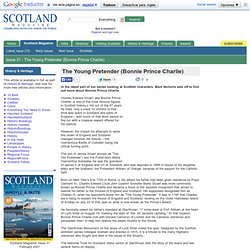 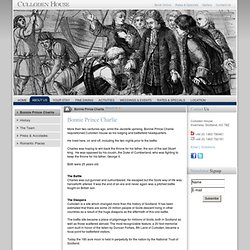 Early in his reign (1736) John Wesley began preaching in England. The subsequent Wesleyan societies and later Methodist churches acted as a conservative deterrent to the tide of social unrest and political radicalism that swept much of Europe during the 18th century. Bonnie Prince Charlie 'Will Come Again'

Jacqueline Riding examines how a 19th-century painting, created almost 150 years after the Jacobite defeat at Culloden, has come to dominate the iconography of that event. The second Jacobite Rebellion of 1745-46 is an important turning point in British history. Yet despite decades of re-evaluation and scholarship the event remains, among the wider public, the legend of ‘Bonnie Prince Charlie’ and his romantic but doomed attempt to regain a stolen crown. The beguiling image of the defeated Scottish prince as hunted fugitive among the heather and mist, evading the bayonets of the English redcoats, lingers still in the collective imagination.

Many of us will know the wistful Skye Boat Song and its tale of ‘the lad that’s born to be king’ as he is spirited away to Skye from whence, like King Arthur, he ‘will come again’. Few, I suspect, will be aware that it is indeed a traditional Gaelic song but set to lyrics by Sir Harold Boulton (1859-1935) of Copped-Hall, Totteridge, Hertfordshire. The Jacobite Claimants > Prince Charles. 'Bonnie Prince Charlie' was born in the Muti Palace in Rome in 1720 amidst great rejoicing, for Jacobites throughout Western Europe looked to him to win back the British throne for the Stuarts. In 1743 the French decided to send an invading force to Britain, led by 'the Young Pretender', as his enemies called him. The scheme fell through due to stormy weather. The Prince decided to go ahead without French assistance, and he set out for Scotland with only a handful of companions, landing in the Outer Hebrides in July 1745 O.S.

By sheer force of personality he won over the Highland chiefs, captured Perth and declared the Union dissolved. He gathered an army of 5,000, marched to Edinburgh, and defeated a Hanoverian force led by Sir John Cope at the Battle of Prestonpans, near Edinburgh in September. His Highland supporters would have been content with that success, but Charles was determined to invade England, and his army marched reluctantly south. Prince Charlie's Long March. A retracing of the route followed by Prince Charles Edward Stuart through the mountains of Moidart,when fleeing from the Redcoat army, 1746 Reprinted from an article published in the Scottish Mountaineering Club Journal 1990 ©Peter D.Brown, 1990 Background to the March The Scottish Mountaineering Club guide to the Western Highlands contains a fascinating account of the Wanderings of Bonnie Prince Charlie, following hisdefeat at Culloden in 1746.

Since the description of the route has appeared in the SMC guide for at least 50 years, I had always presumed that it must have become a popular "long distance trail", a sort of West Highland Way of the far west, and followed by hundreds of hardy mountaineers each year. Person - Prince Charles Edward Stuart. Bonnie Prince Charlie - Glenfinnan Monument, Glenfinnan Traveller Reviews. Glenfinnan. Coordinates: Glenfinnan (Scottish Gaelic: Gleann Fhionghain) is a village in Lochaber area of the Highlands of Scotland. Glenfinnan Monument Feature Page on Undiscovered Scotland. On Monday 19 August 1745 a small rowing boat landed at the north end of Loch Shiel.

It was early afternoon. Prince Charles Edward Stuart, "Bonnie Prince Charlie" came ashore and met his escort of 50 MacDonalds before retiring to a nearby barn to await the response to letters he had sent to possible supporters all over the Highlands. Another 150 MacDonalds were quickly on the scene, but for some time it seemed that Bonnie Prince Charlie was going to have to challenge for his father's right to the thrones of Scotland and England with just 200 men. Then pipes were heard approaching from the north.

It was around 1,000 men of the Clan Cameron coming from Achnacarry and Loch Arkaig. Judging that he had enough support to mount his rebellion, Charles Edward Stuart climbed the hill behind today's NTS visitor Centre and raised his standard. Battle of Prestonpans. Culloden.