Australia's COVID-19 vaccine supply is still patchy. But will other vaccines help fill the void? Wind your mind back to early February. 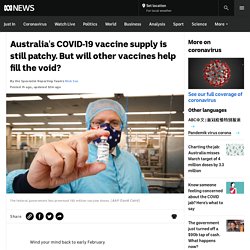 A time when most of Europe and the US — still hibernating in a long, bitter pandemic winter — were well into rolling out their respective vaccine programs. In a big announcement, Health Minister Greg Hunt said the government — which at the time was still three weeks away from conducting its first jab — had worked “quietly, behind the scenes” to secure an extra "10 million doses" of the Pfizer vaccine. It was, and still is, one of the most highly effective and most sought-after vaccines worldwide. "We now have access to over 150 million vaccine doses, ensuring we remain a world leader in the fight against the virus," Mr Hunt said at the time. "It's enough to vaccinate every Australian three times over. " Melbourne blood-clotting case 'likely' linked to AstraZeneca vaccine, Deputy CMO says. Australia's Deputy Chief Medical Officer says it is "likely" there is a link between the AstraZeneca vaccine and a Melbourne man being hospitalised with blood clots. 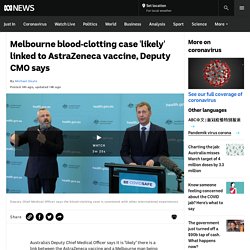 Key points: The Deputy Chief Medical Officer says there is currently no evidence of a link between the AstraZeneca vaccine and blood clottingThis follows a 44-year-old man who developed thrombosis after receiving the jabBoth the TGA and the ATIGA have recommended that no change to the vaccine rollout However, Professor Michael Kidd told media on Saturday there was currently no definitive evidence to prove the link. “Given how consist of the clinical features are in this case, with some similar cases which have been seen overseas, it is likely that this case, which is reported, is related to the vaccine,” he said. He said investigations were ongoing. “I acknowledge that these reports lead to uncertainty and anxiety and we will continue to provide more information to you as soon as we have it available,” Professor Kidd said. Australia's COVID vaccine rollout started off slow — but will it affect when you get it? At the start of the year, Prime Minister Scott Morrison spoke of his hope that by the end of March, the COVID-19 vaccine would be in the arms of 4 million Australians. 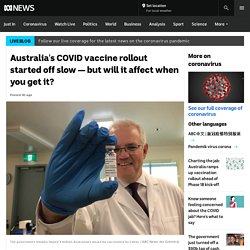 But as it stands on the last day of March, less than 700,000 doses of the vaccine have been administered — just over 16 per cent of the target that was set in January. Here's how Australia's vaccine rollout is tracking, and where you fit into it. How many people has Australia vaccinated? As of today, Australia has vaccinated 670,000 people. Italy, EU refuse AstraZeneca request to ship 250,000 doses of vaccine to Australia. Italy and the European Union have blocked a shipment of the Oxford-AstraZeneca coronavirus vaccine destined for Australia amid a stoush over contract commitments between the pharmaceutical company and the EU. 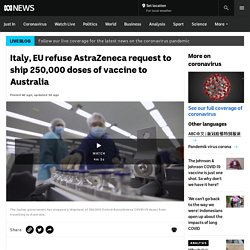 Key points: The Italian government has stopped a shipment of 250,000 Oxford/AstraZeneca COVID-19 doses from travelling to AustraliaThe ban comes amid tension between the EU and AstraZeneca over commitments to supply the vaccineAustralia has secured 53.8 million doses of the vaccine, 50 million of which will be made in Australia It is understood AstraZeneca had asked the Italian government to export 250,000 doses to Australia from its Anagni plant near Rome.

Italy's block on AstraZeneca COVID-19 vaccines prompts warning against 'vaccine protectionism' from Australian government. The Australian Government says it wants to build a "coalition of countries" to pressure the European Union into delivering shipments of COVID-19 vaccines as planned. 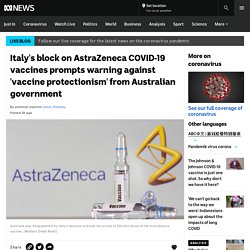 Key points: Trade Minister Dan Tehan wants like-minded nations to pressure EU officials to reverse the export blockHe said this sort of "vaccine protectionism" could hurt developing countries the mostAccording to the current rollout plan, 50 million of Australia's 53.8 million vaccine doses will be locally made Trade Minister Dan Tehan said he was "incredibly disappointed" by Italy's decision late last week to block the export of 250,000 doses of the AstraZeneca vaccine to Australia and is concerned by the possibility it may stop more.

The export restrictions were backed by the powerful European Commission and it is believed to be the first time Europe has halted a shipment to a non-EU country in an effort to secure its own supply. Australian attitudes on the COVID-19 vaccine differ on political lines — but the vast majority are still keen for the jab. 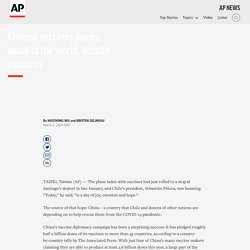 “Today,” he said, “is a day of joy, emotion and hope.” EXPLAINER: UN vaccine plan is underway, but problems remain. As the coronavirus pandemic exploded worldwide last April, global organizations banded together to help ensure that the world’s most vulnerable people would get vaccines amid the rush for shots. 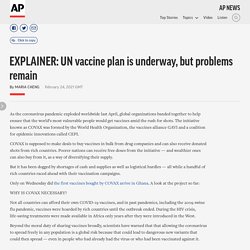 The initiative known as COVAX was formed by the World Health Organization, the vaccines alliance GAVI and a coalition for epidemic innovations called CEPI. COVAX is supposed to make deals to buy vaccines in bulk from drug companies and can also receive donated shots from rich countries. Poorer nations can receive free doses from the initiative — and wealthier ones can also buy from it, as a way of diversifying their supply.

But it has been dogged by shortages of cash and supplies as well as logistical hurdles — all while a handful of rich countries raced ahead with their vaccination campaigns. FDA says single-dose shot from J&J prevents severe COVID. WASHINGTON (AP) — Johnson & Johnson’s single-dose vaccine offers strong protection against severe COVID-19, according to an analysis released Wednesday by U.S. regulators that sets the stage for a final decision on a new and easier-to-use shot to help tame the pandemic. 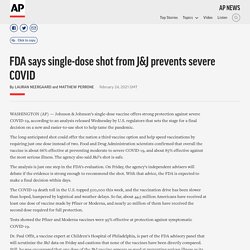 The long-anticipated shot could offer the nation a third vaccine option and help speed vaccinations by requiring just one dose instead of two. Food and Drug Administration scientists confirmed that overall the vaccine is about 66% effective at preventing moderate to severe COVID-19, and about 85% effective against the most serious illness. The agency also said J&J’s shot is safe.

Pfizer and Moderna's COVID-19 vaccines are just the beginning. Will Australia miss out on the mRNA medical revolution? When Drew Weissman and Katalin Karikó got their COVID-19 vaccine jabs before Christmas at the University of Pennsylvania, the cameras were rolling. 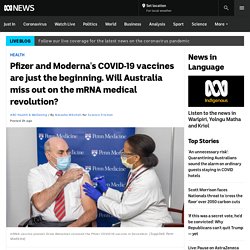 Three decades of persistence and painstaking research into mRNA vaccine science had paid off. They'd proved the sceptics and naysayers wrong. What started out as a wild idea was suddenly a world-changing, lifesaving technology. "We were incredibly excited when we saw the results of the Phase 3 trial that our vaccine worked, it was safe, and had 95 percent efficacy," Professor Weissman says.

Vaccine strategy needs rethink after resistant variants emerge, say scientists. Leading vaccine scientists are calling for a rethink of the goals of vaccination programmes, saying that herd immunity through vaccination is unlikely to be possible because of the emergence of variants like that in South Africa. 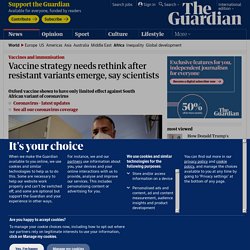 The comments came as the University of Oxford and AstraZeneca acknowledged that their vaccine will not protect people against mild to moderate Covid illness caused by the South African variant. The Oxford vaccine is the mainstay of the UK’s immunisation programme and vitally important around the world because of its low cost and ease of use. The findings came from a study involving more than 2,000 people in South Africa.

They followed results from two vaccines, from Novavax and Janssen, which were trialled there in recent months and were found to have much reduced protection against the variant – at about 60%. 'Believe in science': EU kicks off COVID-19 vaccine campaign. ROME (AP) — Doctors, nurses and the elderly rolled up their sleeves across the European Union to receive the first doses of the coronavirus vaccine Sunday in a symbolic show of unity and moment of hope for a continent confronting its worst health care crisis in a century. Weeks after the U.S., Canada and Britain began inoculations with the same vaccine, the 27-nation bloc staged a coordinated rollout aimed at projecting a unified message that the shot was safe and Europe’s best chance to emerge from the pandemic.

For health care workers who have been battling the virus with only masks and shields to protect themselves, the vaccines represented an emotional relief as the virus continues to kill. But it was also a public chance for them to urge Europe’s 450 million people to get the shots amid continued vaccine and virus skepticism. Austrian Chancellor Sebastian Kurz called the vaccine, which was developed in record time, a “game-changer.” “Europe is well positioned,” she insisted. White House threatens FDA chief's job over vaccine approval.

WASHINGTON (AP) — White House chief of staff Mark Meadows on Friday pressed Food and Drug Administration chief Stephen Hahn to grant an emergency use authorization for Pfizer’s coronavirus vaccine by the end of the day or face possible firing, two administration officials said. AstraZeneca says coronavirus vaccine developed with Oxford can be up to 90 per cent effective - ABC News. AstraZeneca says late-stage trials of its COVID-19 vaccine have been "highly effective" in preventing disease. Researchers found that if people were given a half dose followed by a full dose of the vaccine, rather than two full doses, about 90 per cent of people were protected. Where two full doses were given at least one month apart it showed 62 per cent efficacy. The combined average across different dosing regimes, which had a total of 11,636 trial participants, was 70 per cent effective.

Only 2,741 people in the trial got the most effective dose, while 8,895 people were given the two full doses a month apart. The lower first dose could mean more people could be vaccinated more quickly, AstraZeneca CEO Pascal Soriot said. "The vaccine's simple supply chain and our no-profit pledge and commitment to broad, equitable and timely access means it will be affordable and globally available, supplying hundreds of millions of doses on approval. " Moderna Covid vaccine candidate almost 95% effective, trials show. The race for a coronavirus vaccine has received another shot in the arm with the US biotech firm Moderna becoming the latest to reveal impressive results from phase 3 trials of its jab. An interim analysis released on Monday, and based on 95 patients with confirmed Covid infections, found the candidate vaccine has an efficacy of 94.5%.

The numbers don't lie, the adage goes. And in regards to COVID-19 in Australia right now, that is undoubtedly the case. Just one case of COVID-19 was reported in the community this week — a worker in a quarantine hotel in Sydney who tested positive on Thursday.