Build a Duck - Diversity Game. This is very quick and fun activity with a deep message. 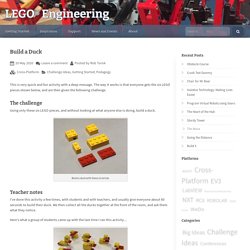 The way it works is that everyone gets the six LEGO pieces shown below, and are then given the following challenge. The challenge Using only these six LEGO pieces, and without looking at what anyone else is doing, build a duck. Teacher notes I’ve done this activity a few times, with students and with teachers, and usually give everyone about 60 seconds to build their duck. Cross-cultural Turbulence at Air France-KLM: Employees Testify. English version of Turbulences interculturelles chez Air France-KLM: des employés témoignent The other explanation for the current tensions Air France-KLM has been in the news following the Dutch government’s acquisition of a stake in the company en 2019, bringing its share up to the level of that of the French government, respectively 14%. 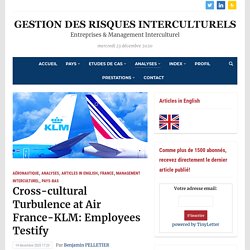 The political and economic stakes have been widely debated to denounce this “hostile method”, this “coup de force” or this “coup de Trafalgar”, according to commentators. Research-Publishing.net. Luz azul Inspirational Mail: What about bias? When we’re trying to make diverse teams become truly innovative, to include all perspectives and to enhance intercultural communication, then we need to talk about bias—unconscious bias. 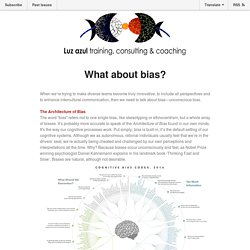 The Architecture of Bias The word “bias” refers not to one single bias, like stereotyping or ethnocentrism, but a whole array of biases. It’s probably more accurate to speak of the Architecture of Bias found in our own minds. It’s the way our cognitive processes work. Put simply, bias is built-in; it’s the default setting of our cognitive systems. Intercultural Citizenship Test. For facilitators The aim of the Intercultural Citizenship Test is to increase knowledge and awareness on human rights, intercultural competence, perceptions of diversity as an advantage, as well as the willingness to act in an intercultural way. 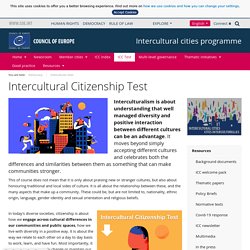 It is intended to be both an educational and a political tool – raising awareness among citizens, professionals and politicians of the need to define (urban) citizenship in a pluralistic and inclusive way. The idea is for the test is to support the debate around active citizenship as a factor of integration as well as the role of cities in fostering active citizenship for all by opening up political and participation spaces for newcomers. Sarcone’s Pulsatin Star (Dynamic Müller-Lyer illusion) - Gianni A. Sarcone. Color Perception Across Cultures – Do You See What I See? In a Candoshi village in the heart of Peru, anthropologist Alexandre Surrallés puts a small colored chip on a table and asks, “Ini tamaara?” 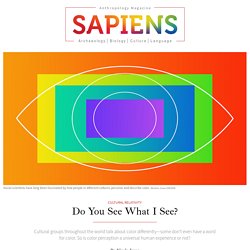 Italian body language-La gestualità italiana :) The movements that betray who you are - BBC Future. Why do mind and brain matter in intercultural learning? What Makes You “Multicultural” Executive Summary Individual people can be multicultural in three different (albeit inter-related) ways: they can have deep knowledge of, they can identify with, and they can have internalized more than one culture. 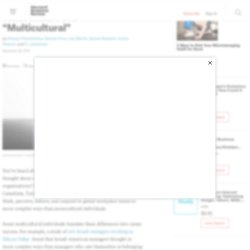 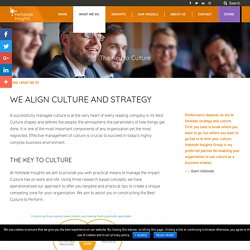 Culture shapes and defines the people, the atmosphere, the parameters of how things get done. It is one of the most important components of any organisation yet the most neglected. Effective management of culture is crucial to succeed in today’s highly complex business environment. At Hofstede Insights we aim to provide you with practical means to manage the impact Culture has on work and life. Using three research based concepts, we have operationalised our approach to offer you tangible and practical tips to create a unique competing zone for your organisation. ORGANISATIONAL CULTURE consulting: Mergers and Acquisitions are commonplace in modern global business. Expat Explorer Survey - Compare countries: Germany, France : HSBC Expat. Doing business in China - cultural differences. Why language is not everything that Noam Chomsky said it is. Few scientific disagreements lead to public controversy. 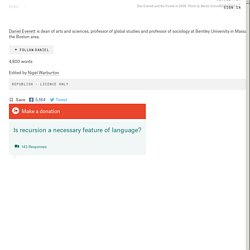 But there are times when the subject or the participants in a debate so capture the public imagination that otherwise dry, technical matters of discord among researchers erupt into the media, eliciting a wide array of opinions from experts and non-experts. Getting the public interested is good for science if it leads to deeper thinking about things that are of importance to understanding our species. And there is a controversy of just this type bubbling away for many years now in linguistics. Most recently, the disagreements in the field have pulled the American author Tom Wolfe into the fray, with a new book, The Kingdom of Speech, and a cover story in Harper’s Magazine on the topic. This has changed the debate a bit, engaging many more people than ever before, but now it’s centred around Wolfe, Noam Chomsky – and me.

The meaning of silence in different cultures. Silence can be used to intimidate; or to save face; to show respect; or it can simply suggest that the other person is relaxed enough in your company to enjoy a quiet moment. 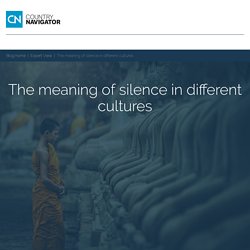 Misinterpreting the meaning of silence in different cultures, though, and you could be on your way to losing an important business deal. Silence in Japanese culture I was part of the EMEA team when the Japanese bank I was working for took over an American bank, says a former VP of marketing. Intercultural Management. Diversity and inclusion in the workplace - ESSEC Business School. Body Language - Our Perceptions Of Personal Space. Chapter 9 Thousands of books and articles have been written about the staking out and guarding of territories by animals, birds, fish and primates. 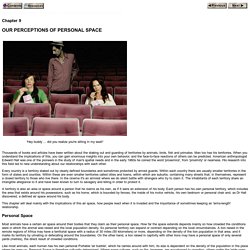 Man too has his territories. When you understand the implications of this, you can gain enormous insights into your own behavior, and the face-to-face reactions of others can be predicted. How to Manage a Virtual Team? - Explained in 3 Minutes by Professor Anca Metiu. How to solve virtual team conflicts. Humor and culture in international business. Live cultural map over time 1981 to 2015.

The Monkeys and the Bananas Story. How We (Mis-)See the World — feel like you belong. Above is a map full of such bad information and half-guesses about lands outside US-Americans’ personal experience. It makes two observations: 1) When you come from a particular place, you idealize that place. You refer to its customs as “right” or “logical.” This makes you see other places as “backward” or “rude.” The phenomenon is called ethnocentrism, and it is not restricted to residents of the United States.

How language shapes the way we think. John Kerry and Francois Hollande's awkward embrace. Low-Context Culture: Definition & Overview. Low-context culture is a term used by anthropologist Edward T. Hall in 1976 to describe a communication style that relies heavily on explicit and direct language. Learn more about low-context cultures from examples and test your knowledge with a quiz. Explore our library of over 10,000 lessons Click "next lesson" whenever you finish a lesson and quiz. Got It You now have full access to our lessons and courses. I gesti italiani: quali sono e cosa significano? LA BISE by PAUL TAYLOR (VOSTFR) How to shake hands around the world. How to Manage a Virtual Team? - Explained in 3 Minutes by Professor Anca Metiu.

Cross-cultural negotiations: Avoiding the pitfalls. 24 Charts of Leadership Styles Around the World. Growing up in three countries (South Korea, Canada and United States), I’m fascinated by how culture shapes different leadership styles. Getting to Si, Ja, Oui, Hai, and Da. Tim Carr, an American working for a defense company based in the midwestern United States, was about to enter a sensitive bargaining session with a high-level Saudi Arabian customer, but he wasn’t particularly concerned. Carr was an experienced negotiator and was well-trained in basic principles: Separate the people from the problem. Define your BATNA (best alternative to a negotiated agreement) up front. Focus on interests, not positions.

Pico Iyer: Where is home?