The Nazca Lines & Interactive Map. The Nazca Lines are a series of ancient geoglyphs located in the Nazca Desert in southern Peru, constructed between 500 BC and 500 AD. 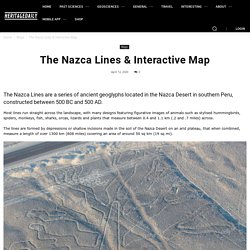 Most lines run straight across the landscape, with many designs featuring figurative images of animals such as stylised hummingbirds, spiders, monkeys, fish, sharks, orcas, lizards and plants that measure between 0.4 and 1.1 km (.2 and .7 miles) across. The lines are formed by depressions or shallow incisions made in the soil of the Nazca Desert on an arid plateau, that when combined, measure a length of over 1300 km (808 miles) covering an area of around 50 sq km (19 sq mi). Although some local geoglyphs resemble Paracas motifs (an Andean society existing between approximately 800 BC and 100 BC), most scholars believe the Nazca Lines were created by the Nazca culture.

The early Nazca civilisation was made up of local chiefdoms and regional centers of power possibly centered around Cahuachi, a site of pilgrimage in the coastal area of the Central Andes. Team Of Scientists Discovered 140 Huge Mysterious Drawings In Peru. Humanity has come a long way with its numerous discoveries throughout history. 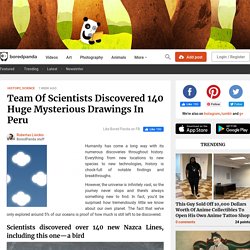 Everything from new locations to new species to new technologies, history is chock-full of notable findings and breakthroughs. However, the universe is infinitely vast, so the journey never stops and there’s always something new to find. In fact, you’d be surprised how tremendously little we know about our own planet. The fact that we’ve only explored around 5% of our oceans is proof of how much is still left to be discovered. Scientists discovered over 140 new Nazca Lines, including this one—a bird Image credits: Yamagata University A team of Japanese scientists have found 143 new geoglyphs in the Nazca Pampa region, Peru.

Humanoid The Nazca Geoglyphs (also known as Nazca Lines) are a group of very large glyphs impressed into the soil of the Nazca Desert in southern Peru. Double-Headed Snake & Person Fish One of the more interesting facts about the Nazca Lines is that they are extremely huge. Killer Whale Feline. Team Of Scientists Discovered 140 Huge Mysterious Drawings In Peru. Video Number 4845. 1210.1170. High winds expose previously unknown Nazca geoglyphs - Galactic ConnectionGalactic Connection. Strong winds and sandstorms reaching speeds of up to 60 miles per hour, which occurred in the region of Ica last week, have revealed previously undiscovered Nazca lines in the Valley of El Ingenio in the Nazca plains of Peru, according to a news release in El Comercio. 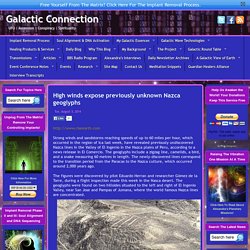 The geoglyphs include a zigzag line, camelids, a bird, and a snake measuring 60 metres in length. The newly-discovered lines correspond to the transition period from the Paracas to the Nazca culture, which occurred around 2,000 years ago. The figures were discovered by pilot Eduardo Herran and researcher Gómez de la Torre, during a flight inspection made ​​this week in the Nasca desert. The geoglyphs were found on two hillsides situated to the left and right of El Ingenio Valley, near San Jose and Pampas of Jumana, where the world famous Nazca lines are concentrated.

Located in the arid Peruvian coastal plain, some 400 km south of Lima, the geoglyphs of Nazca cover an incredible 450 km2. Being Schooled by the Ancients. I haven't written a real mind bender in a while so this morning I thought I'd hop on the keyboard and try to flip your noodles. 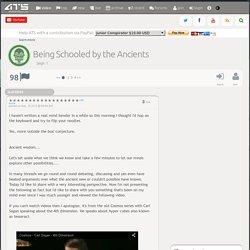 Yes, more 'outside the box' conjecture. Ancient wisdom... Let's set aside what we think we know and take a few minutes to let our minds explore other possibilities.... In many threads we go round and round debating, discussing and yes even have heated arguments over what the ancient new or couldn't possible have known. Today I'd like to share with a very interesting perspective. If you can't watch videos then I apologize, it's from the old Cosmos series with Carl Sagan speaking about the 4th dimension.

Now, I'd like to also present the following video so as to get a better understanding of just how complicated this could become. Now, let's talk about an often overlooked Nazca enigma...