Who were the grisly folk? Is there a touch of the Neanderthal in all of us? 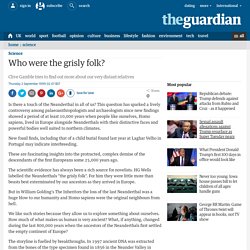 This question has sparked a lively controversy among palaeoanthropologists and archaeologists since new findings showed a period of at least 10,000 years when people like ourselves, Homo sapiens, lived in Europe alongside Neanderthals with their distinctive faces and powerful bodies well suited to northern climates. H.G. Wells: The Grisly Folk. "Can these bones live? 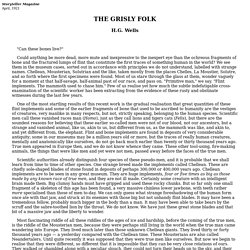 " Could anything be more dead, more mute and inexpressive to the inexpert eye than the ochreous fragments of bone and the fractured lumps of flint that constitute the first traces of something human in the world? We see them in the museum cases, sorted out in accordance with principles we do not understand, labelled with strange names. Chellean, Mousterian, Solutrian and the like, taken mostly from the places Chelles, La Moustier, Solutre, and so forth where the first specimens were found. Most of us stare through the glass at them, wonder vaguely for a moment at that half-savage, half-animal past of our race, and pass on. 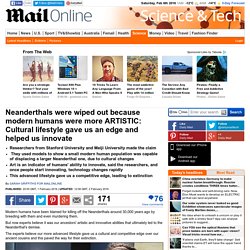 The study claims our more advanced lifestyle gave us a cultural and competitive edge over our ancient cousins which ultimately paved the way for their extinction Researchers from Stanford University in California and Meiji University in Japan used computer models to show a small modern human population was capable of displacing a larger Neanderthal one, if they had a sufficiently large cultural advantage - such as artistic capability. Study suggests how modern humans drove Neanderthals to extinction.

Ecocultural niche modeling supports popular hypothesis that Neanderthals were driven to extinction by modern humans due to comparative cultural advantage. 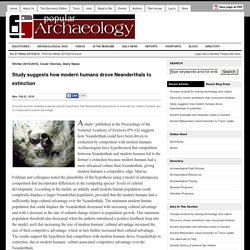 A study* published in the Proceedings of the National Academy of Sciences (PNAS) suggests how Neanderthals could have been driven to extinction by competition with modern humans. A Mammoth, a Spear, and a New Timeline for Humans in the Arctic. The first person to reach the North Pole was the American explorer Robert Peary, in 1909. 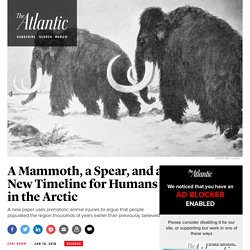 Or maybe it was Frederick Cook, in 1908. Historians still aren’t sure which man really made it there first. Did Dakotaraptor Really Face Off Against Tyrannosaurus? By now you’ve probably heard about the giant “raptor” uncovered in South Dakota. 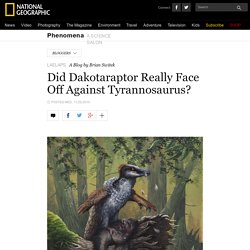 The dinosaur’s discovery came as quite a shock. For the past century Tyrannosaurus rex has dominated our imaginations as the sole apex predator of the Hell Creek Formation, but Dakotaraptor steini, as Robert DePalma and coauthors dubbed the dinosaurs, was large enough to compete for flesh with young tyrannosaurs. With scenes from the Jurassic Park franchise still stomping through our imaginations, it’s tempting to pit packs of 18-foot-long Dakotaraptor against the heavyweight champion T. rex, mobbing the bulky carnivore off its kills. DePalma has suggested as much, calling Dakotaraptor “the most lethal thing you can possibly throw into the Hell Creek ecosystem.”

But before we get too carried away and start commissioning murals of giant raptors slashing the flesh of Tyrannosaurus Age of Reptiles style, it’s worth thinking about what the world of dinosaurs was really like. Dakotaraptor changes that picture. Bubonic plague hung around in Europe. The plague bacterium Yersinia pestis may have lurked in a Medieval European reservoir for at least 300 years, researchers suggest January 13 in PLOS ONE. 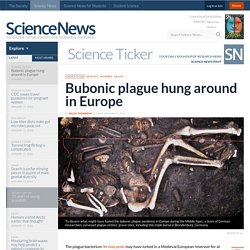 The second of two major plague pandemics hit Europe from the 14th to 16th centuries, peaking during the Black Death from 1346 to 1353. The new study weighs in on a longstanding debate over what fed the pandemic, strains of the bacterium traveling on waves of trade from Asia via the Silk Road or a homegrown biological reservoir such as lice. Researchers analyzed DNA from 30 skeletal remains spanning the 14th to 17th centuries.

Eight carried strains of Y. pestis, and all bore genetic similarity to each other and to those found in previously sampled European plague victims. Strains from Asia would have injected more genetic variety. Woolly Mammoth DNA Inserted into Elephant Cells. The idea of bringing extinct animals back to life continues to reside in the realm of science fiction. 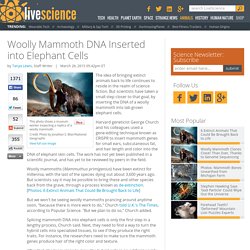 But scientists have taken a small step closer to that goal, by inserting the DNA of a woolly mammoth into lab-grown elephant cells. Harvard geneticist George Church and his colleagues used a gene-editing technique known as CRISPR to insert mammoth genes for small ears, subcutaneous fat, and hair length and color into the DNA of elephant skin cells. Cracking the Case of the Explorers Club Mystery Meat. A few weeks before the Explorers Club held its annual dinner in 1951, the organization—a society for field researchers and dedicated adventurers— received a letter with a strange request. 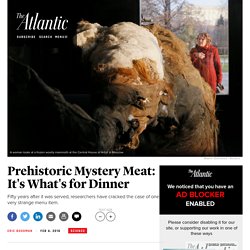 It came from Paul Howes, a taxidermist, diorama-painter, and curator at the Bruce Museum in Greenwich, Connecticut. Dear Explorers Club: Unfortunately I will have to be away at the time of the annual dinner, but I am so anxious to have a fragment of that 250,000 year-old mastodon (?) Meat for this museum that I had planned to secretly pocket my share, and exhibit here for all time instead of swallowing it. Would the Club let me have my tidbit preserved for this purpose if I sent in my $9.50, although I cannot be there to get it myself on the night of the dinner? This is a crazy request, but then you know explorers! Howes almost had it right—according to rumor, the Club was going to be serving mammoth, not mastodon. He also knew that the story was probably apocryphal. His excitement was understandable.