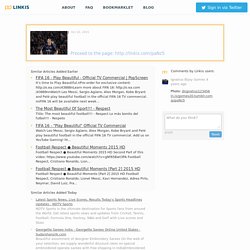 Happy Birthday to Simone Zaza, who turns 27 today! See all six goals against Granada. Terms and conditions Information about Spanish Act 15/1999 on the protection of personal data (Articles 5, 6 and 11) and Spanish Law 34/2002 of 11 July, services of information society and electronic commerce. 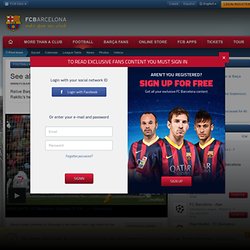 Personal data provided on this form will be included in a file of which the FC Barcelona is the Controller and will be processed for the management of its relations with FC Barcelona and for the supply of publications and communications by mail and electronic mail referred to FC Barcelona services and activities, and will only be disclosed to third parties with your consent or if it is allowed in accordance with the law.

Your personal information will also be used to inform and send you promotional and commercial offers related on services and products FC Barcelona is interested in marketing, if not opposed to treatment within 30 days, by marking the box of the form. 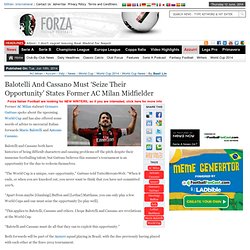 Balotelli and Cassano both have histories of being difficult characters and causing problems off the pitch despite their immense footballing talent, but Gattuso believes this summer’s tournament is an opportunity for the duo to redeem themselves. “The World Cup is a unique, rare opportunity,” Gattuso told TuttoMercatoWeb. “When it ends, or when you are knocked out, you never want to think that you have not committed 100%. “Apart from maybe [Gianluigi] Buffon and [Lothar] Matthaus, you can only play a few World Cups and one must seize the opportunity [to play well]. “This applies to Balotelli, Cassano and others.

“Balotelli and Cassano must do all that they can to exploit this opportunity.” World Cup History: Mexico. Long known as the powerhouse of CONCACAF, El Tri will make their 15th World Cup appearance in Brazil and aim to advance to the knockout stages for an impressive 6th consecutive time. 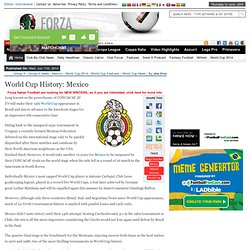 Dating back to the inaugural 1930 tournament in Uruguay a recently formed Mexican federation debuted on the international stage only to be quickly dispatched after three matches and outshone by their North American neighbours as the USA finished third. However, it would take another 72 years for Mexico to be surpassed by their CONCACAF rivals on the world stage when the side fell in a round of 16 match to the Americans in South Korea. Individually Mexico’s most capped World Cup player is Antonio Carbajal, Club Leon goalkeeping legend, played in a record five World Cups, a feat later achieved by German great Lothar Matthaus and will be equalled again this summer by Azzurri mainstay Gianluigi Buffon. FIFA World Cup 2014 Group Standings. 2014 FIFA WORLD CUP BRAZIL™ 2014 FIFA WORLD CUP BRAZIL™ Mishal-77: Modric, Cristiano and Kroos after the... World Cup 2014: Group C Preview.

Group C may not boast the most illustrious names at the 2014 FIFA World Cup but there lies the beauty of this somewhat unpredictable assemble. 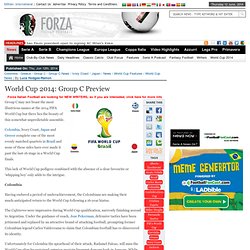 Colombia, Ivory Coast, Japan and Greece complete one of the most evenly matched quartets in Brazil and none of these sides have ever made it past the last-16 stage in a World Cup finals. This lack of World Cup pedigree combined with the absence of a clear favourite or ‘whipping boy’ only adds to the intrigue. Colombia. World Cup Podcast – Day 10 – Messi Magic and Ghanaian Witchcraft. সর্বকালের সেরা বিশ্ব একাদশ. দেখতে দেখতে ৯০ বছর হয়ে গেল বিশ্বকাপ ফুটবলের বয়স। 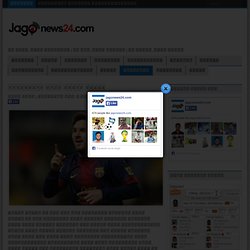 World Cup stunning moments: Clive Thomas denies Zico and Brazil. “Uncontroversial, non-dictatorial and magnanimous are not adjectives I would associate with Clive Thomas,” wrote Clive White in the Times in April 1981, after “a ludicrous penalty award” had handed Wolves a last-minute equaliser against Tottenham in an FA Cup semi-final. 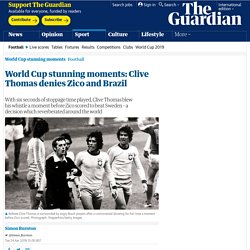 “There is a view that the best referees make themselves as inconspicuous as possible. I am not sure that Mr Thomas shares that belief, because the star performer before an audience of 50,000 and millions more peering through the keyhole of television was unquestionably Mr Thomas. Inter Milan squeaks past European champions Real Madrid in penalties during the International Champions Cup. BERKELEY, Calif. -- Even a moment of brilliance by Gareth Bale couldn't overcome tough play as Inter Milan squeaked past European champions Real Madrid in penalty kicks 3-2 in their first game of the Guinness International Champions Cup. 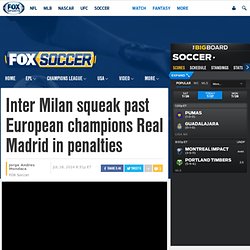 Bale, the man who joined Real Madrid's cast of "Galacticos" last season in the most expensive transfer in history, opened the scoring with a 25-yard left-footed wonderstrike 10 minutes into the contest. A momentary lapse in midfield for Inter allowed Real Madrid's Pepe to poke the ball away and pass it to Bale, who proceeded to saunter into position unopposed before ripping it straight into the net and sending the mostly pro-Madrid crowd at California Memorial Stadium into a frenzy. Argentina v/s Germany Friendly, Dusseldorf: Argentina beat World Champions Germany 4-2 as Angel Di Maria, Sergio Aguero shine. Getty Images FULL-TIME There goes the final whistle! 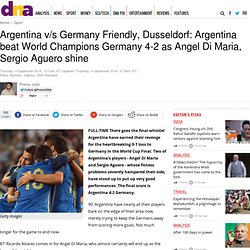 Argentina have earned their revenge for the heartbreaking 0-1 loss to Germany in the World Cup Final. Two of Argentina's players - Angel Di Maria and Sergio Aguero - whose fitness problems severely hampered their side, have stood up to put up very good performances. 17 September. Premierleague.com rifles through the annals of the Barclays Premier League to find significant events. 17 September 2007 - Derby County 1-0 Newcastle United Kenny Miller scored on his debut for promoted Derby County to beat Newcastle United give them their first, and what turned out to be their only, win of the Barclays Premier League season. 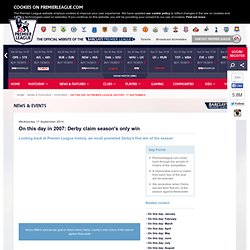 The deadline-day signing struck in the 39th minute to ensure the Rams stopped a run of four successive league defeats. The high-flying Magpies could have been ahead before Miller scored as David Rozehnal missed from close range after being set up by Michael Owen following good work by James Milner, who broke away from a Derby corner. But Newcastle paid the price when Rams goalkeeper Stephen Bywater launched a long kick downfield that was touched on to Miller, who rifled a spectacular shot past Steve Harper from 25 yards.

"We're up and running. #FCBarcelona #VineFCB Join the team. Força Barça! Spurs vs QPR. Harry Redknapp is looking forward to returning to Tottenham Hotspur as he takes his Queens Park Rangers side to White Hart Lane for Sunday's Barclays Premier League match. The QPR manager took over at Spurs in 2008 with the club bottom of the table but, by the time he left in 2012, he had secured three consecutive top-five finishes in his three full seasons in charge. The 67-year-old managed the team in the UEFA Champions League in 2010/11 where, inspired by Gareth Bale, they produced some breathtaking football before being knocked out in the last eight by Real Madrid.

The former West Ham manager faced his former club in QPR's last stint in the Barclays Premier League, overseeing a 0-0 draw at Loftus Road in January 2013, but Sunday's match represents Redknapp's first return to a club where he is still held in high regard. "I'm looking forward to going back, I had a fantastic time at Tottenham," Redknapp said. "I loved every minute. Pirlo: This World Cup will be my last competition with Italy. Juventus midfielder Andrea Pirlo has revealed that he will be leaving the Italian national team after this summer’s World Cup in Brazil.

The 35-year-old, who just renewed his contract with the Bianconeri until June 2016, has played a major part in the Azzurri senior team for over a decade, even helping his country win the 2006 World Cup in Germany, but he admits that the time has come for him to give other players a chance to prove themselves. Segrioramos: Friday. PRONOY & PROKASH. জার্মানির মিরোস্লাভ ক্লোজে সম্পর্কে পাঁচটি তথ্য. PRONOY & PROKASH. Meet Neymar's girlfriend Bruna Marquezine. Onestopfootball : #BRA vs #GER & #NED vs ... Run In Rain by Maruf Rayhan. ‘Argentina in the final would be Brazil’s worst nightmare’

In 1950 Uruguay beat Brazil to win the World Cup with the famous ‘Maracanazo’ and the images were seen all over the world. If Brazil reach the final this time and have to play Argentina, those memories will come flooding back. The worst thing that can happen to Brazil is to have to face Argentina next Sunday. It’s the worst possible scenario for them in a final because there would be 40,000 Argentines in the stadium, in what would be a home match for Brazil, and that could generate a negative psychological state for them amid an adverse result or situation in the game. Brazil need to beat Germany first and Argentina have to get past Netherlands. Those games are evenly balanced, 50 per cent, but if Argentina get to the final, they’ll win it – especially if they play Brazil.

Argentina looked much more balanced against Belgium and played much closer together, which allowed them to defend better as a group. They are up against a great rival in Netherlands, though. PRONOY & PROKASH. FutballTweets : TODAY IS THE DAY The biggest ... International team maps nearly 200,000 global glaciers in quest for sea rise answers. An international team led by glaciologists from the University of Colorado Boulder and Trent University in Ontario, Canada has completed the first mapping of virtually all of the world's glaciers -- including their locations and sizes -- allowing for calculations of their volumes and ongoing contributions to global sea rise as the world warms.

The team mapped and catalogued some 198,000 glaciers around the world as part of the massive Randolph Glacier Inventory, or RGI, to better understand rising seas over the coming decades as anthropogenic greenhouse gases heat the planet. Led by CU-Boulder Professor Tad Pfeffer and Trent University Professor Graham Cogley, the team included 74 scientists from 18 countries, most working on an unpaid, volunteer basis. Dance Review: The Sir Frederick Ashton Festival at Sarasota Ballet. Staticqueen: 19 Days to Go! Portugal! What I Wore. What I Wore. WhatIWore: Know someone who loves nothing more than camping out and sitting ‘round the fire?

These gift ideas span from stocking stuffers to bigger splurges and could work for a guy or gal! Pocket Outdoor Survival Guide - a cute little stocking stuffer with loads of tips and tricks for spending time in the great outdoors. Firestarter - I’ve got a huge respect for those who can start a fire with minimal matches or any fuel! State or National Park Pass - Annual passes start anew January 1, which make Christmas the perfect time to give one as a gift! High Quality Sleeping Bag - This one falls into the splurge category, so best for an avid camper that could use an update.

Waterproof Outdoor Blanket - I’m such a sucker for red and black plaid and this one looks extra snuggly. Dutch Oven - Every fall my family makes a huge batch of chilli in a similar pot over the fire. Check out Alyssa Miller in the 2013 Sports Illustrated Swimsuit Edition.