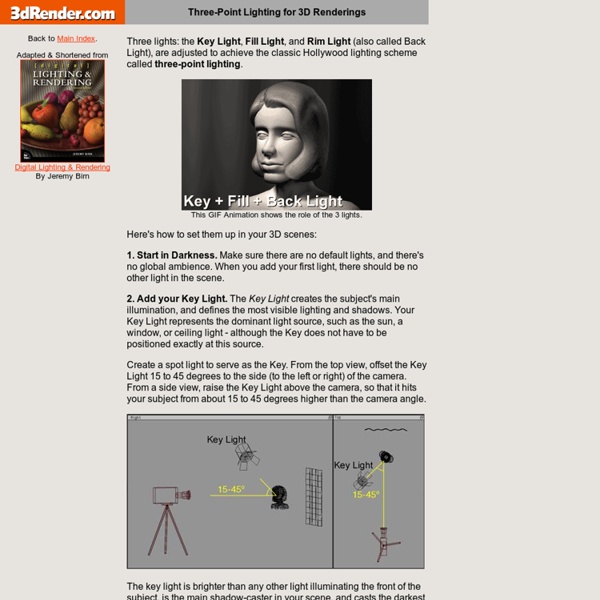 Three lights: the Key Light, Fill Light, and Rim Light (also called Back Light), are adjusted to achieve the classic Hollywood lighting scheme called three-point lighting. This GIF Animation shows the role of the 3 lights. Here's how to set them up in your 3D scenes: 1. 2. Create a spot light to serve as the Key. The key light is brighter than any other light illuminating the front of the subject, is the main shadow-caster in your scene, and casts the darkest shadows. NOTE: Be sure to stop and do test-renders here. 3. From the top view, a Fill Light should come from a generally opposite angle than the Key - if the Key is on the left, the Fill should be on the right - but don't make all of your lighting 100% symmetrical! At most, Fill Lights can be about half as bright as your Key (a Key-to-Fill ratio of 2:1). Shadows from a Fill Light are optional, and often skipped. 4. From the top view, add a spot light, and position it behind your subject, opposite from the camera. That's it.

Television Production Lighting: The Key Light Key Light Considerations As the name implies, the key light is the main light. In terms of coherence or quality the key light should be in the middle of the hard-to-soft range. As you can see from some of the illustrations in these chapters, light that is either too hard or too soft is not desirable for most subject matter -- especially people. In three-point (formula) lighting the key light is placed at an angle of between 30- and 45-degrees from either the left or the right of the camera. In the photograph of ▲ the model at the start of the module the key light is on the left, just as it's shown in this drawing. Forty-five degrees off to one side is best because, among other things, it brings out optimum texture and form (dimension) in the subject. This brings us to the rule we'll need to keep in mind, especially if multiple cameras and camera angles are involved in the production: Light for the close-up camera. Does it matter if the key is on the right or the left? The Key's Vertical Angle

Patrick Joust kateoplis: "We in the United States grow up celebrating ourselves as the world’s most powerful nation, the world’s richest nation, the world’s freest and most blessed nation.Sure, technically Norwegians may be wealthier per capita, and the Japanese may live longer, but the world watches the… "In the Social Progress Index, the United States excels in access to advanced education but ranks 70th in health, 69th in ecosystem sustainability, 39th in basic education, 34th in access to water and sanitation and 31st in personal safety. Even in access to cellphones and the Internet, the United States ranks a disappointing 23rd, partly because one American in five lacks Internet access. This Social Progress Index ranks New Zealand No. 1, followed by Switzerland, Iceland and the Netherlands. Many who back proposed Republican cuts in Medicaid, food stamps and public services believe that such trims would boost America’s competitiveness.

Photo Is My Life easyCover camera case Home - Generation Awake (EN) 30 Magical Photos Of Children Playing Around The World No matter their cultural background, no matter their economic situation, kids will always find imaginative ways to have fun. Their wild imaginations and magical childhood moments, when captured on camera by talented photographers, can make for truly wonderful photos. These 33 images we collected will prove that childhood can be wonderful no matter where you go. Many in the Western world fear that technology is making today’s children lose touch with nature and with their own creativity, and while there are arguments to be made for the intellectual stimulation that apps and programs for children can bring, there’s also something to be said for simply playing with a stick in the mud or chasing dandelion seeds though an open meadow. For better or worse, the children in these photos seem entirely content making their own fun. Indonesia Image credits: Ipoenk Graphic Image credits: Agoes Antara Image credits: I Gede Lila Kantiana Image credits: Gede Lila Kantiana Russia Burkina Faso Myanmar Tajikistan