Attenzione. GitHub - ahkscript/awesome-AutoHotkey: A curated list of awesome AutoHotkey libraries, library distributions, scripts, tools and resources. Hyperlink. Function Libraries, AHK. « Your favorite AHK script(s) » - Offtopic - AutoHotkey Community. If by "favorite" you mean the ones i tend to use the most... that would be1) My login manager that allows me to log in to my most popular websites, and games. 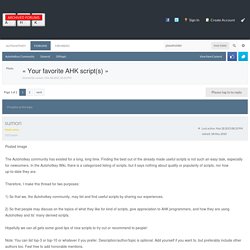 It provides a way to send my usernames (since they vary from site to site, my passwords, since they also vary from site to site. It also sends any email address i have set up for that site, and it moves the site window to location 0,0 on the screen. Right now i have 32 sites stored in an ini file that the script uses to decide which site to access. 2) My password generator handles the generation of user passwords of varying lengths width with user definable combinations of numbers, upper and lower case letters, hex digits and special characters. It also checks the passwords for their "strength". the max I've tested it for was 128 characters (1024 bits). « Your favorite AHK script(s) » - Page 2 - Offtopic - AutoHotkey Community. Hi there! 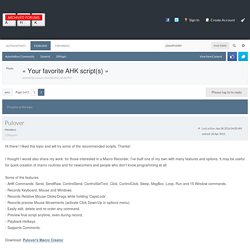 I liked this topic and will try some of the recommended scripts. Thanks! I thought I would also share my work: for those interested in a Macro Recorder, I've built one of my own with many features and options. It may be useful for quick creation of macro routines and for newcomers and people who don't know programming at all. EitherMouse 0.64 - Multiple mice, individual settings... - AutoHotkey Community. Re: Slider issue, see below vosvos: after modifying the code for eithermouse, just run the EitherMouse.ahk file instead of compiling it manually with ahk2exe, it will self-compile and maintain the icons when the script is run... 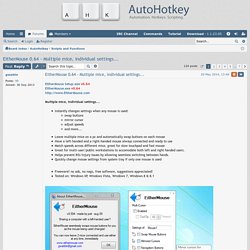 JeremyReg: its written in autohotkey, and the code can be included with installation (tick the checkbox)... to learn about AHK see Thanks for the report guys, I'm investigating a cause and solution for this (disabled sliders)...Edit: And yes, old versions have been purged from the site (404)... i don't think they would have helped with this though Edit: I found the problem with the help of a user, and will try to get a fixed version updated soon... explanation and workaround can be derived from our communication: Do you have a custom font size? Excellent. So yes, a solution should be easy and I'll work on it as soon as I can, thanks again all for the bug reports Edit:Quick fix implemented, I'll let people test it out if desired before updating the main release: Joel.

AHK Workspaces - Window Management Script by Maestrith - AutoHotkey Community. Are there certain Workspaces, or groups of windows (applications, file folders, etc.), that you have to open and arrange in a specific way every time you do certain tasks? 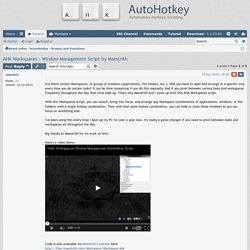 It can be time consuming if you do this manually. And if you pivot between various tasks and workspaces frequently throughout the day, that time adds up. That's why Maestrith and I came up with this AHK Workspaces script. 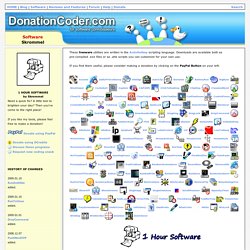 Features: - Shows movies at the top of the page, and images below. . - Autoplays movies in their original size, and centers images. - Use Tab to skip to the next image, and space to go one screen down. - Reload the page to autoplay all movies after they have loaded. - Click on an image to scroll to the next image. - Move the mouse over the image to scroll up, down, left and right. - Movies open in the assinged player, I recommend using Windows Media Player. - Rightclick on an image to temporarily zoom in, rightdrag to move around. - WMW, MPEG and other movies open in the assinged players. 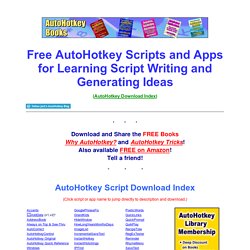 I'm currently working on a new QuickRef script which accesses both AutoHotkey Version 1.1 commands and Version 2.0 functions. When it's mostly ready, I'll post a workable version of the new script. An AutoHotkey Rainmeter/desktop toggler. : Rainmeter. Hyperlink. RainMeter. Virtual Desktops Win 10. Attenzione. WinWait framework (do something to a window when it appears) - Scripts and Functions - AutoHotkey Community. Updated September 21, 2014 to make it a lot better The issue: Sometimes you want to do the same thing each time a particular window pops up. 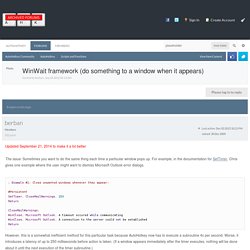 For example, in the documentation for SetTimer, Chris gives one example where the user might want to dismiss Microsoft Outlook error dialogs. Hyperlink. OnWin() Manage Window, AHK. Attenzione.

Accessible Info Viewer. Reciprocal Relationship. Hyperlink. Acc Library. Attenzione. GitHub - Drugoy/Autohotkey-scripts-.ahk: My collection of autohotkey scripts. Some scripts are written by me, some are modified by me, some are completely created by others. Hyperlink. PinRainMeter2Desktop. Disable context menu, AHK. Bug.n - Tiling Window Manager. Commanding Rainmeter with AHK (and vice versa) - AutoHotkey Community. Here's what I use this technique for: Get play count for a playing song I use MusicBee for a media player, which works well with the default Rainmeter NowPlaying plugin, except for one thing: play count. 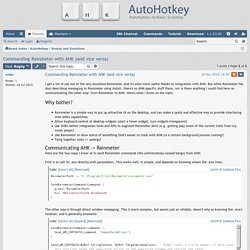 Now, there's a plugin (MusicBeeIPC) that allows getting it through window messages, but doing that through Rainmeter is more difficult than I've been able to manage (because the return values from the plugin aren't just simple ints like Rainmeter expects). Fortunately, there is an AHK version of the API, so that's easy. So to make my skin show the play count, I just send a message to AHK each time the track changes (which is visible via the default NowPlaying plugin), and AHK queries MusicBeeIPC, then returns the result back to Rainmeter. Control a timer skin via keyboard shortcuts I have a timer skin that I use to track Pomodoro-esque productivity bursts, but moving my mouse all the way over to my status monitor to click it feels silly.