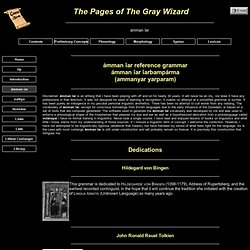 It will never be an IAL, nor does it have any pretensions in that direction. It was not designed for ease of learning or recognition. It makes no attempt at a simplified grammar or syntax. aUI. What?! 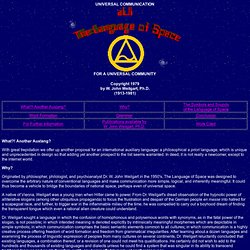 Another Auxlang? With great trepidation we offer up another proposal for an international auxiliary language: a philosophical a priori language, which is unique and unprecedented in design so that adding yet another prospect to the list seems warranted. The Ewellic Alphabet. The three symbols in the upper-left corner of this page are actually letters. 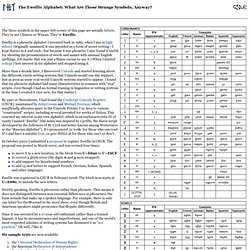 They’re not Chinese or Wiccan. They’re Ewellic. Ewellic is a phonetic alphabet I invented back in 1980, when I was in high school. Originally unnamed, it was intended as a form of secret writing—I kept diaries in it and such—but because it was phonetic, I also found it useful for showing the pronunciation of words and names with unusual English spellings.

(Or maybe that was just a flimsy excuse to use it.) More than a decade later, I discovered Unicode and started learning about the different, exotic writing systems that Unicode would one day support, just as soon as some real-world Unicode systems started to appear. Ferengi Language. Introduction Pronounciation Morphology SyntaxNumbers Vocabulary Online Dictionary Fonts and Software. 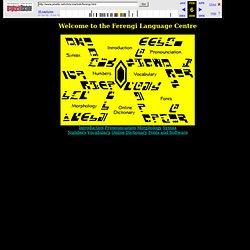 Ferengi Language version 1.95. Preliminary Ferengi Lexicon 2.0. Ilianore. Tongues, history & myths of Ascard Ilianóre, language of the Scéaldings, is my first invented language, and I thought about adding a little more to it than just sounds and structures. 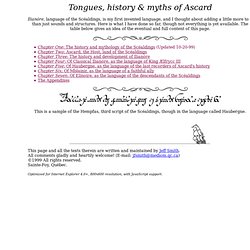 Here is what I have done so far, though not everything is yet available. The table below gives an idea of the eventual and full content of this page. This is a sample of the Hempfas, third script of the Scéaldings, though in the language called Haubergne. Kinya. Kinya. Pictographic Monofon Script. No major feature of the PMF script is entirely original. Pictograms are as older than the alphabet. Shorthands have typically used very simple monoline strokes, and numerous phonemic scripts have been proposed for English.

What makes the pictographic script notable is the fact that all of the features have been combined in a single set of renamed alphabetic characters. Contrived scripts have tended to be unidimensional. They have attempted to improve on the standard English writing system in just one way, such as being more regular, being easier to read, being faster to write, being more space efficient, or being easier to learn and remember. Typically, the new orthographic proposal was in fact superior in at least one respect to the traditional orthography (TO) . Pictographic monofon is easy enough to read, quick to write, phonemic, and designed to be easy to learn and recall. 11 Scripts Compared Across 4 Dimensions (200 Kb) 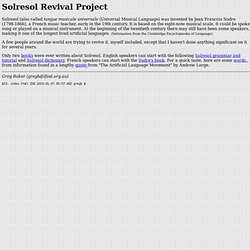 It is based on the eight-note musical scale. It could be spoken, sung or played on a musical instrument. At the beginning of the twentieth century there may still have been some speakers, making it one of the longest lived artificial languages. (Information from the Cambridge Encyclopaedia of Language) A few people around the world are trying to revive it, myself included, except that I haven't done anything significant on it for several years.

Only two books were ever written about Solresol. Streich. Syai. This web site, begun in 2006, is being developed by someone who was born in 1935. 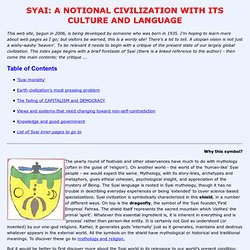 I'm hoping to learn more about web pages as I go; but visitors be warned, this is a wordy site! There's a lot to tell. A utopian vision is not just a wishy-washy 'heaven'. To be relevant it needs to begin with a critique of the present state of our largely global civilization. Teamouse's Home. Tsolyani Language. The Verdurian Alphabet. 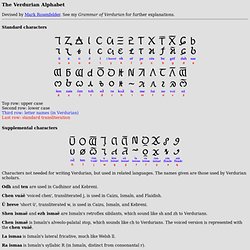 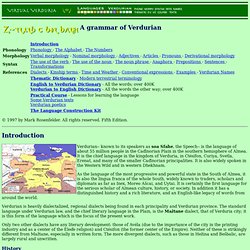 All rights reserved. Fifth Edition. Introduction. The World Xaîn. Xaîni. Xaîn is the second world of the green F2 star known as Ar, which it circles in an irregular orbit with a period of about 2.3 Terran Standard Years; although slightly smaller than Earth it is a dense, metal-rich world with an extraordinary biochemistry rich in metalloprotein complexes. 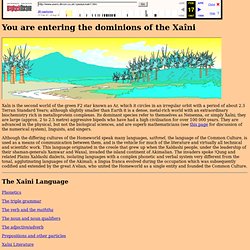 Its dominant species refer to themselves as Neisenna, or simply Xaîni; they are large (approx. 2 to 2.5 metre) aggressive bipeds who have had a high civilisation for over 100 000 years. They are advanced in the physical, but not the biological sciences, and are superb mathematicians (see this page for discussion of the numerical system), linguists, and singers. Although the differing cultures of the Homeworld speak many languages, xathmel, the language of the Common Culture, is used as a means of communication between them, and is the vehicle for much of the literature and virtually all technical and scientific work. Phonetics The triple grammar The verb and the maththa The noun and noun qualifiers.