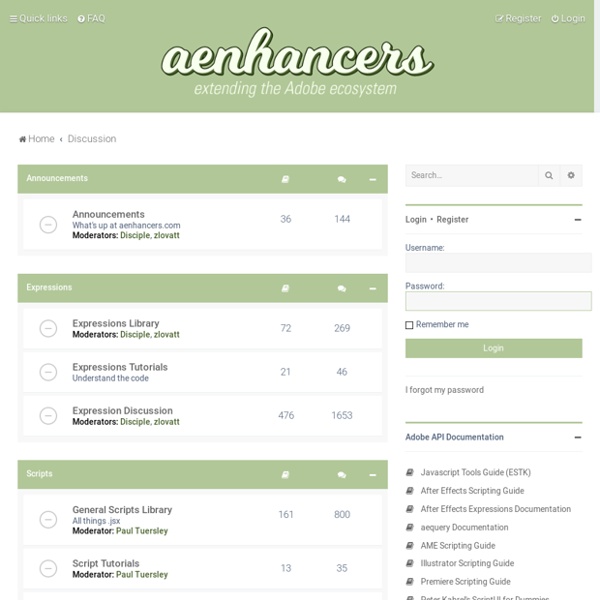 ZXP Installer - aescripts + aeplugins - aescripts.com We are happy to share with the community our FREE installer for CEP extensions for Adobe After Effects and Premiere Pro. It will work with any ZXP extension, it does not have to be one you got from us. It has a fallback custom install option that should work in cases where other installers (including Adobe's own installer) fail. So if you have been unable to install a ZXP extension on you system please give our installer a try. It has a super friendly and easy to use drag and drop on Mac and double-click on Window. If you experience have any issues, please open a support ticket Download Mac OS X Download Windows

After Effects Expressions JavaScript Tutorial Dan Ebberts's Expressioneering Design Guide There are different ways to approach this, but here we'll focus on creating an opacity expression that can detect when a camera can see the layer's front side. In that case we want the opacity to be 100%. We want the opacity to be 0% when the camera can see the back of the layer. Once we have such an expression, we can apply it to layers representing both sides of an object, rotate the back layer 180 degrees on its y axis, and then parent the back layer to the front layer. Then when we rotate the front layer or orbit the camera, we will always see the correct image. We also want this to work even if there is no camera. To make this work we're going to take advantage of one of the expression language's extremely handy (but, unfortunately, somewhat difficult to understand) features - layer space transforms. In this case we will use the toCompVec() transform to convert a vector pointing out of the layer (in the direction of the z axis) into the coordinate system of the camera view.

Create a custom Control effect - AE ENHANCERS Hello, I discovered scripting and expressions a couple of months ago, and while I understand the basics I still need to understand a few points. I'm really happy to have found this forum. Anyway, I read this post with interest, but I think I ran into an OS-specific problem: I work on a Mac, and I obviously use After Effects under Mac OS X. The fact is that, on the Mac, the PresetEffects.xml file you're talking about is not located in a folder called "Support Files", but it is embedded in the application itself. In other words, it means that any tool other than AE itself can't tell where is this file! Here's an example: if I'm in an application and choose "File > Open So, what's the "path" to this file under Mac OS X? I guess I need to open the script and modify the path used, but I don't know if it will work. Have some Mac users here have encountered the same issue? Thanks in advance! P.S. : I'm not a native English speaker, I hope I made myself clear in the lines above