2019 Jehovah’s Witness Convention Videos Published Again After Successful Takedown Request. Each year, thousands of Jehovah’s Witnesses flood into football and soccer stadiums across the globe to prepare for enlightenment and direction from their global leaders, the Governing Body. 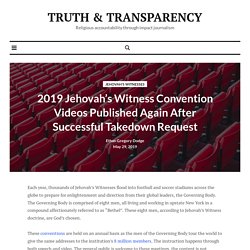 The Governing Body is comprised of eight men, all living and working in upstate New York in a compound affectionately referred to as “Bethel”. These eight men, according to Jehovah’s Witness doctrine, are God’s chosen. These conventions are held on an annual basis as the men of the Governing Body tour the world to give the same addresses to the institution’s 8 million members. The instruction happens through both speech and video. The general public is welcome to these meetings, the content is not distributed beyond the event itself. One particularly active user of the Reddit’s r/exjw, redditing_again, told Truth & Transparency that Watch Tower claims “to be open and not secretive about its beliefs.” But, Watch Tower, the institution’s governing organization, does not agree. 2019 version Shepherd the Flock of God. Dr Ryan Lee Psychotherapy and Religious. 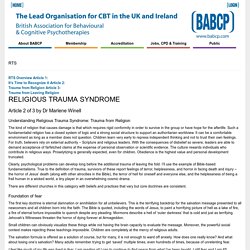 Such a fundamentalist religion has a closed system of logic and a strong social structure to support an authoritarian worldview. It can be a comfortable environment as long as a member does not question. Children learn very early to repress independent thinking and not to trust their own feelings. For truth, believers rely on external authority – Scripture and religious leaders. Clearly, psychological problems can develop long before the additional trauma of leaving the fold. There are different churches in this category with beliefs and practices that vary but core doctrines are consistent. Foundation of fear The first key doctrine is eternal damnation or annihilation for all unbelievers. Shepherd the Flock of God 1 Peter 5:2 - Jehovah's Witnesses. Religious Trauma Syndrome: Trauma from Leaving Religion. The Theocratic Life and Times of Theodore Jaracz.

For nearly 36 years, Theodore (Ted) Jaracz was one of the most powerful members of Jehovah’s Witnesses Governing Body until he died at age 85 on Wednesday, June 9, 2010. 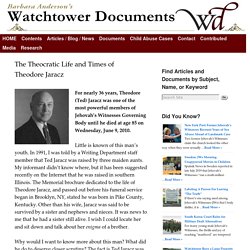 Little is known of this man’s youth. In 1991, I was told by a Writing Department staff member that Ted Jaracz was raised by three maiden aunts. My informant didn’t know where, but it has been suggested recently on the Internet that he was raised in southern Illinois. The Memorial brochure dedicated to the life of Theodore Jaracz, and passed out before his funeral service began in Brooklyn, NY, stated he was born in Pike County, Kentucky. Other than his wife, Jaracz was said to be survived by a sister and nephews and nieces. Why would I want to know more about this man? The JW’s Bible » Biblical Books. THE JW BIBLE is a book that compares key Jehovah’s Witness’ doctrinal texts as translated by the Watchtower Society in their “New World Translation” (NWT) with the texts in Standard Bible Translations and the Original Greek Text. 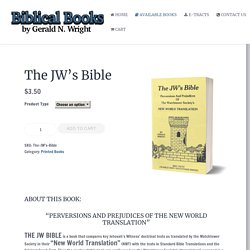 Thus the reader of this book can easily see how the Watchtower Society’s “translators” engaged in a pattern of perverted and prejudicial mistranslation in order to manufacture a Bible that supports their peculiar cultic doctrines. Such is why the full title of this book is “The Perversions and Prejudices of the New World Translation.” Specific Questions pertaining to their doctrinally motivated mistranslations that are answered in this book include: Is Jesus Christ “God” or “a god” as per the NWT? Is Jesus Christ equal as a divine being or person with the Father or is he a lesser being as per the NWT? Vastapostatearmy.

Behind The Blue Curtain Online Radio. Recommendedreading - exjw. How to set up a VPN in 10 minutes for free (and why you urgently need one) “A computer lets you make more mistakes faster than any other invention with the possible exceptions of handguns and Tequila.” — Mitch Ratcliffe Soon every mistake you’ve ever made online will not only be available to your internet service provider (ISP) — it will be available to any corporation or foreign government who wants to see those mistakes. 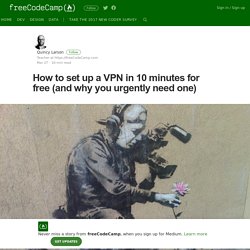 Thanks to last week’s US Senate decision, ISPs can sell your entire web browsing history to literally anyone without your permission. The only rules that prevented this are all being repealed, and won’t be reinstated any time soon (it would take an act of congress). The Story of Randall Watters part 3. In the last part of the story, I left off where the apostasy had begun at the Brooklyn Bethel headquarters in 1979, and some of my friends had been asked to leave. 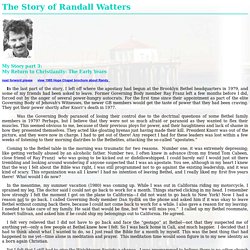 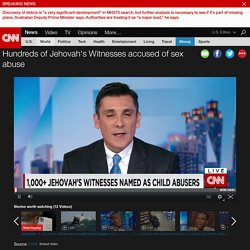 Stories worth watching (12 Videos) NFL star twerks on 'Celebrity Family Feud' New Horizons passes Pluto after 3 billion-mile journey See amazing response after boy, 4, loses dad Car owner catches mechanics doing this ... Danny Haszard - Watchtower Whistleblower. TRUTH BE TOLD. Steven Hassan. Steven Alan Hassan (born 1954) is a licensed mental health counselor who has written extensively on the subject of cults.[2] He is the author of three books on the subject of destructive cults, and what he describes as their use of mind control, thought reform, and the psychology of influence in order to recruit and retain members. 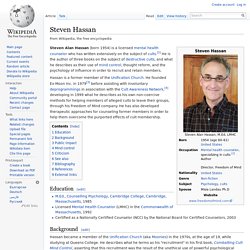 Hassan is a former member of the Unification Church. He founded Ex-Moon Inc. in 1979[3] before assisting with involuntary deprogrammings in association with the Cult Awareness Network,[4] developing in 1999 what he describes as his own non-coercive methods for helping members of alleged cults to leave their groups, through his Freedom of Mind company. He has also developed therapeutic approaches for counseling former members in order to help them overcome the purported effects of cult membership. Education[edit] Background[edit] Hassan became a member of the Unification Church (aka Moonies) in the 1970s, at the age of 19, while studying at Queens College. Untitled. "Truth Be Told" Documentary film about Jehovah's Witnesses Boston Premiere 5/5/13,Hassan and Smith Q & A.

An international association providing support for those affected by the Watchtower Society. Official Page of JW Alumni (Ex-Jehovah's Witnesses, JW.org) TRUTH BE TOLD. JOHN 2:4 Jesus saith unto her, Woman, what have I to do with thee? mine hour is not yet come. Viewing the King James Version. 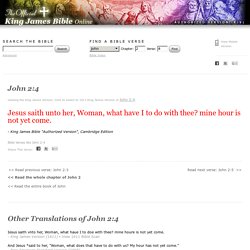 Click to switch to 1611 King James Version of John 2:4. - King James Bible "Authorized Version", Cambridge Edition Bible Verses like John 2:4 Share This Verse: << Read the whole chapter of John 2 << Read the entire book of John Other Translations of John 2:4 Iesus saith vnto her, Woman, what haue I to doe with thee? And Jesus *said to her, "Woman, what does that have to do with us? And Jesus saith unto her, Woman, what have I to do with thee? Jesus said to her, Woman, this is not your business; my time is still to come.- Basic English Bible. Jehovah's Witnesses: Watchtower News. ...Help, advice, and answers to Questions for struggling Jehovah's Witnesses and Disfellowshipped ones. » Beulah, and the name designated by the very mouth of Jehovah Seek Jehovah.

There was a sister I knew named Beulah growing up. 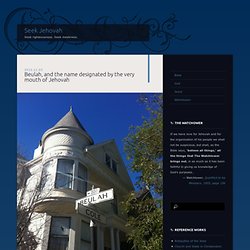 I thought it a strange name, not being acquainted with it’s meaning. Today I crossed a street I often cross—Beulah—and wondered what my parents think of when they see the name. Jimi Hendrix. Jimi Hendrix [back] I can explain everything better through music. YOU HYPNOTIZE PEOPLE... And when you get people at their weakest point you can preach into the subconscious what we want to say.

That's why the name "electric church' flashes in and out. - Jimi Hendrix He used to always talk about some devil or something was in him, you know. . [2015 May Book] Drugs as Weapons Against Us: The CIA's Murderous Targeting of SDS, Panthers, Hendrix, Lennon, Cobain, Tupac, and Other Leftists by John L. . [2009 Nov] The Jimi Hendrix Political Harassment, Kidnap and Murder Experience by Alex Constantine [2009 may] Hendrix murdered by his manager, says former aide. Jehovah's Witnesses: Watchtower News. Armageddon in 1975. Freeminds — Reinvent yourself.