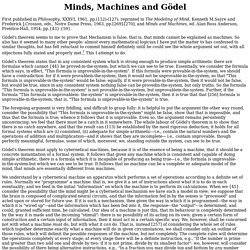 Alan Ross Anderson, Prentice-Hall, 1954, pp.{43}-{59}. Gödel's theorem seems to me to prove that Mechanism is false, that is, that minds cannot be explained as machines. So also has it seemed to many other people: almost every mathematical logician I have put the matter to has confessed to similar thoughts, but has felt reluctant to commit himself definitely until he could see the whole argument set out, with all objections fully stated and properly met.1 This I attempt to do.

Gödel's theorem states that in any consistent system which is strong enough to produce simple arithmetic there are formulae which cannot {44} be proved-in-the-system, but which we can see to be true. Introduction to God Arguments. A poster on the comment section of the CADRE blog arrogantly proclaimed: I understand that some Christians have a mental issue accepting that some people have knowledge that the Christian god does not exist. 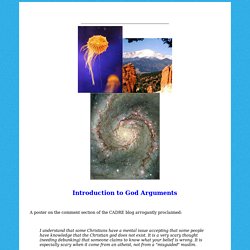 It is a very scary thought (needing debunking) that someone claims to know what your belief is wrong. It is especially scary when it come from an atheist, not from a "misguided" muslim. 12/10/2007 03:02:00 PMwhen challenged to present the argument he just said: C.S. Lewis and the Argument from Reason. Editor's Note: In celebrating the release of the new documentary film "C.S. 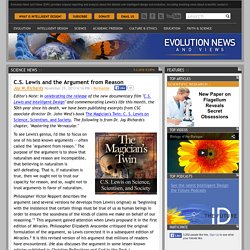 Lewis and Intelligent Design" and commemorating Lewis's life this month, the 50th year since his death, we have been publishing excerpts from CSC associate director Dr. John West's book The Magician's Twin: C. S. Lewis on Science, Scientism, and Society. Csl vs naturalism. An Aristotelian Proof of the Existence of God? In his reply to my latest post, Edward Feser took me to task for focusing exclusively on the teleological argument instead of his favorite argument: the cosmological argument (which includes St. 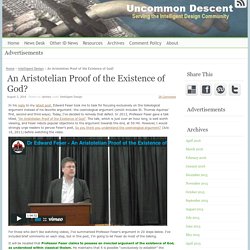 Thomas Aquinas’ first, second and third ways). Today, I’ve decided to remedy that defect. In 2013, Professor Feser gave a talk titled, “An Aristotelian Proof of the Existence of God”. Faithphil_1999_0016_0003_0378_0389- Philosophy Documentation Center. Alexander Pruss's Blog: Cannonball and regress. From my first year of graduate school, I've been pushing a cannonball argument against Hume's idea that a regress of causes provides a complete explanation. 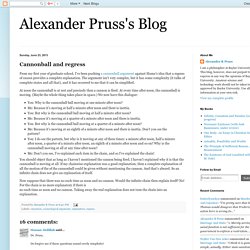 The argument isn't very complex, but it has some complexity (it talks of complete states and all that), and it has occurred to me that it can be simplified. At noon the cannonball is at rest and precisely then a cannon is fired. At every time after noon, the cannonball is moving. (Maybe the whole thing takes place in space.) We now have this dialogue: Critical thinking web. 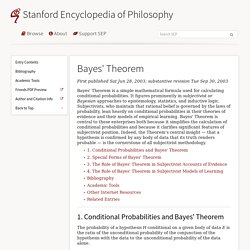 Conditional Probabilities and Bayes' Theorem The probability of a hypothesis H conditional on a given body of data E is the ratio of the unconditional probability of the conjunction of the hypothesis with the data to the unconditional probability of the data alone. To illustrate, suppose J. Doe is a randomly chosen American who was alive on January 1, 2000. According to the United States Center for Disease Control, roughly 2.4 million of the 275 million Americans alive on that date died during the 2000 calendar year. Here are some straightforward consequences of (1.1): Probability. God, Arguments for the Existence of. Existence of God. C) All naturalistic phenomena are empirically derived, thus they are contingent by their very nature. 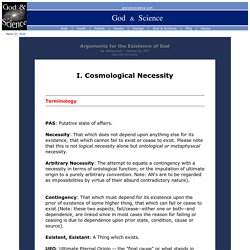 As Karl Popper said, empirical facts are facts which might not have been. Everything that belongs to space time is a contingent truth because it could have been otherwise, it is dependent upon the existence of something else for its existence going all the way back to the Big Bang, which is itself contingent upon something. (Anthony Flew, Philosophical Dictionary New York: St. Some Implications of God as Ipsum Esse Subsistens. God is that being whose essence is identical to His existence. 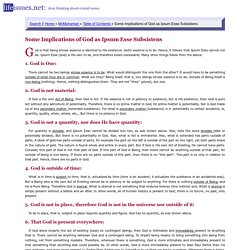 God's essence is to be. Hence, it follows that Ipsum Esse cannot not be. Ipsum Esse (God) is His own to be, and therefore exists necessarily. Avicenna’s argument from contingency, Part I. The medieval Islamic philosopher Ibn Sina or Avicenna (c. 980 - 1037) is one among that myriad of thinkers of genius unjustly neglected by contemporary philosophers. 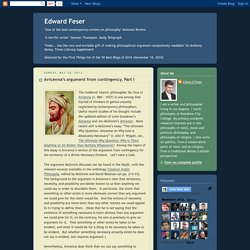 Useful recent studies of his thought include the updated edition of Lenn Goodman’s Avicenna and Jon McGinnis’s Avicenna. More recent still is McGinnis’s essay “The Ultimate Why Question: Avicenna on Why God is Absolutely Necessary” in John F. Wippel, ed., The Ultimate Why Question: Why Is There Anything at All Rather than Nothing Whatsoever? Avicenna OUP. How can being itself be a personal being? The fundamental problem in understanding the "personal" nature of the ground of being is that our understanding of the problem is backwards to the truth of the solution. 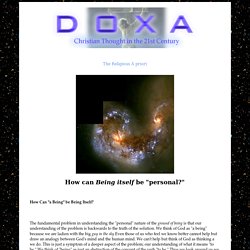 XXVIII. Elegance of The God Hypothesis. My own simplistically boilded down version of Koon's argument:assumptions1) Every wholly contingent fact has a cause. (facts that are partly or wholly necessary need not)2) Applying aggregation axiom, anything of a kin dk = such a thing as arrgigate of all kinds.3) Aggreagates can't exist unless all parts exist (which means necessary aggregate must have Necessary parts, contingent aggregate must have contingent parts. Existence of God. The Berkeley_Goswami Argument Actually this argument is just called the "Berkeley" Argument because it has a certain resemblance to Bishop Berkeley's famous dictum, "to be is to be perceived. " But it is not really the same argument. Actually, it is about "collapsing the wave function" in quantum physics.

Glen Miler, Christian Think Tank "The quantum one--in which an observer is required--has a rather staggering possible implication, as noted by physicist John Gribbon in Schrodinger's Kittens and the Search for Reality (p. 15-16): "Take the Copenhagen Interpretation literally, and it tells you that an electron wave collapses to make a point on a detector screen because the entire Universe is looking at it.