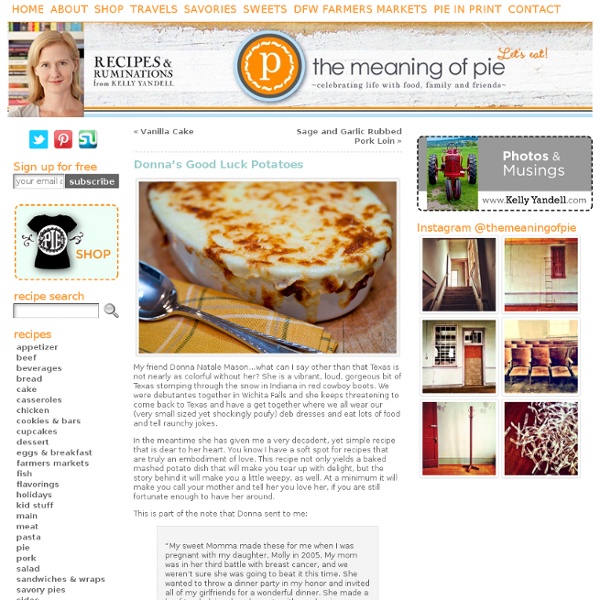 My friend Donna Natale Mason…what can I say other than that Texas is not nearly as colorful without her? She is a vibrant, loud, gorgeous bit of Texas stomping through the snow in Indiana in red cowboy boots. We were debutantes together in Wichita Falls and she keeps threatening to come back to Texas and have a get together where we all wear our (very small sized yet shockingly poufy) deb dresses and eat lots of food and tell raunchy jokes. In the meantime she has given me a very decadent, yet simple recipe that is dear to her heart. This is part of the note that Donna sent to me: “My sweet Momma made these for me when I was pregnant with my daughter, Molly in 2005. Hence, I call these Donna’s Good Luck Potatoes. My only other comment on mashed potatoes is that it is important to mash in the butter before you add the milk. Scrub the potatoes and poke several holes in each with a fork. Whip the cream until it is fluffy, but soft and fold in Gruyere cheese. Notes: In closing:

Creamy Macaroni and Cheese A creamy macaroni and cheese recipe that will satisfy both young and old made with Kerrygold cheese and butter from grass-fed cows. This mac and cheese reheats beautifully the next day with just a bit of milk or cream stirred in. Ole pointed out a few weeks ago that our children were growing up with a different food experience than either one of us had. The secret to this mac and cheese is in the farmhouse cheese that goes into the sauce. While the pasta cooks, get ready for the sauce by shredding the cheese. Once the noodles are ready and drained, melt two tablespoons of butter over medium-high heat and then whisk in flour and cook for a minute. Stir in the Dijon, black pepper and a pinch of salt and stir in the sautéed shallots. We served the macaroni alongside a steak salad for Kiera’s 11th birthday dinner, and the next day the kids enjoyed leftovers for lunch with giant smiles on their faces. Kerrygold did not compensate me for this post. Copyright © Food for My Family.

Bacon Cups I had an occasion calling for bacon themed food and my mind immediately turned towards the famed bacon mat. I needed something a little more single-serving though, so I decided to attempt bacon cups. In the bacon mat instructions there is mention of draping the mat over an overturned metal bowl and cooking it so that it would turn out in as a bowl shape. I decided to try using the backs of various muffin and mini cake pans, I ran out of bacon before I got to try as many as I would have liked so I’ll have to try more at a later date. Any excuse for more bacon. I set the oven at 400 degrees and carefully formed foil over the back of the muffin pan. This all took three hours and my house filled with smoke, but it was worth it. For cup shapes I used the back of this Wilton King-Size Muffin Pan. For the first try I used two layers of bacon on the sides and wove it like a basket, or at least like I imagine a basket would be woven: It held its structure very well though:

french onion soup I’m firmly of the belief that no matter what ails you in the realm of the kitchen, onion soup can cure it. Never cooked before? Don’t think you’ll be able to pull off the kind of cooking you believe you need to go to a restaurant to experience? Start with onion soup. Have only $5 to spend on dinner? I realize it was unfair to even make a passing reference to weepingly delicious onion soup the other day without refreshing it here. One year ago: New York Cheesecake and ShakshukaTwo years ago: Artichoke Olive Crostini and Chocolate Caramel Crack(ers)Three years ago: Spring Panzanella and Lemon Yogurt Anything CakeFour years ago: Artichoke, Cranberry Bean and Arugula Salad and Arborio Rice Pudding Onion Soup [Soupe à l’Oignon] Adapted from Mastering the Art of French Cooking Melt the butter and oil together in the bottom of a 4- to 5-quart saucepan or Dutch oven over moderately low heat. After 15 minutes, uncover the pot, raise the heat slightly and stir in the salt and sugar.

Hash-brown casserole | The Wanna be Country Girl This hash-brown casserole is the perfect side dish. I served it last night with my chicken pot pie to a crowd. It’s cheesy comfort food at its best. The parmesan gives it a tangy flavor, and best of all it’s really easy to fix. Its got five ingredients you mix together and pop it in the oven. Start out by adding 1 – 32 ounce bag of hash-browns to a large mixing bowl. Next add 2 – 10 3/4 ounce cans of cream of potato soup. Followed by 16 ounces of sour cream. Now comes the cheesy part. And 1 cup of fresh grated parmesan cheese. Next add a good-sized pinch of salt and pepper, and that’s it. Put the mixture into a buttered Pyrex. Run this wonderful concoction into a pre-heated oven at 350′ for 1 hour See…..brown and crunchy. You may wonder why I’ve taken such a close-up picture. It’s because I almost forgot to take a photo at all. Enjoy! the wanna be country girl – Caroline

Butter Chicken Note: By popular demand, we’re featuring this recipe again. Great reports across the board! I originally loved the looks of this recipe, submitted by Tasty Kitchen member lillieknits, because I knew I had almost all the ingredients in my kitchen (important, since I don’t live around the corner from a grocery store)…and because the sauce contained both tomatoes and cream. Yum. But after I made it…oh, boy. You need these spices…AND ground coriander, which I didn’t have in my pantry. Chop up several cloves of garlic. And throw everything in a mixing bowl! After marinating the chicken, dice up a whole onion. Heat 1/4 cup (1/2 stick) butter in a large skillet. Let the onions cook for several minutes… …Until they’re golden brown and translucent. Next, Add the chicken breasts to the pan. Cook the chicken for a couple of minutes, then flip it to the other side. Pour in the tomato sauce… And the diced tomatoes. Right before serving, pour in the cream. Come on. And that’s it! Here’s the printable recipe:

Old School – Self Reliance 101 » Blog Archive » make your own ricotta cheese in five minutes Homemade ricotta? Really? That smooth, beautiful layer of yum in lasagna? Yes, dear students, it’s possible. And it’s as easy as kindergarten. The Damsel suspects you have everything you need, at this moment, in your kitchen. At the Old School, the Damsel likes to teach things they used to know by heart in the olden days, and put a new twist on them when she can. First, set a colander over a dish. Measure 2 cups of milk (the higher the fat content, the higher your yield) into a glass bowl or other microwavable vessel. Add two tablespoons of plain white vinegar, or, in other words, one tablespoon per cup of milk. Microwave this for 2-4 minutes, or until you see it start to bubble around the edges. Stir gently. Scoop the solids into the colander and let it drain until it reaches the desired consistency. The resulting cheese is soft and sort of like cream cheese, but less firm. The Damsel loved its fresh taste. Thanks, Kenji, for the microwave method.

Smoky Chipotle Parmesan French Fries | cooking on the weekends I truly appreciate your visiting my site! If this looks delicious to you, please subscribe for my occasional emails with more great recipes, to the right of this post. You can also follow what I’m cooking on Facebook, Google+, Pinterest and Twitter. One of my absolute favorite flavors in the world (right up there with Nutella and mangoes) is Chipotle Peppers in Adobo Sauce. Spicy, smoky, and oh-so-yummy! This french fry recipe is so flavorful that you really don’t need to dip them in anything. Smoky Chipotle Parmesan French Fries Recipe 3-1/2 tablespoons olive oil 1 tablespoon finely chopped chipotle peppers in adobo sauce 2 tablespoons finely grated Parmesan cheese 1 teaspoon smoked paprika 1/2 teaspoon lemon juice 1-1/2 teaspoons sea salt 1-1/3 -pounds Idaho Russet Potatoes Preheat the oven to 425 degrees F. Notes Exactly what are chipotle peppers in adobo sauce? Like avocados and french fries?

Ratatouille The boyfriend and I saw Ratatouille last week. Besides it being a cook/animation lover’s wet dream, it inspired a discussion afterward about Pixar movies in general. We surmised that they rule. See, where most current animation relies on pop culture references and kitschy radio tunes, Pixar concentrates on story and character. In honor of Pixar’s most recent winnah, I whipped up this Ratatouille dish from the February 1995 issue of Bon Appetit (via Epicurious). (Note that the cheese is optional, and leaving it out cuts the cost almost in half.) Ratatouille on the Run 6 servings (Bon Appetit says ½ c per serving, but mine came out to about 1 c per serving) Adapted from Bon Appetit/Epicurious. 1) Heat oil in big Dutch oven over medium heat. 2) Take cover off pot and reduce for about 10 minutes, stirring occasionally. 3) Preheat oven to 350°F. Approximate Calories, Fat, and Price Per Serving 165.3 calories, 9.5 g fat, $1.67