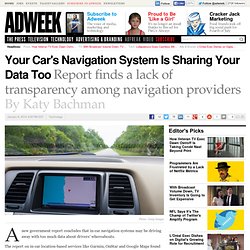 The report on in-car location-based services like Garmin, OnStar and Google Maps found that while such companies are taking some steps to protect consumers’ privacy, they need to do more to inform consumers how they use and share location data. The GAO report was based on information provided by 10 companies representing auto manufacturers, portable navigation device companies and developers of map and navigation apps for mobile devices. Of the 10 companies, nine share data with third parties, including traffic information providers, but they fail to provide specific disclosures about why data is collected and shared. 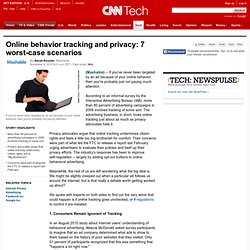 Meanwhile, the rest of us are left wondering what the big deal is. 1. 2. 3. 4. 5. 6. 7. MI6 chief blows his cover as wife's Facebook account reveals family holidays, showbiz friends and links to David Irving. By Jason Lewis, Mail on Sunday Security Editor Updated: 18:14 GMT, 5 July 2009 Compromised: Incoming MI6 head Sir John Sawers in a picture his wife published on her Facebook profile page The new head of MI6 has been left exposed by a major personal security breach after his wife published intimate photographs and family details on the Facebook website. 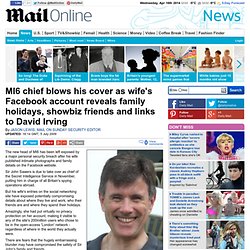 Sir John Sawers is due to take over as chief of the Secret Intelligence Service in November, putting him in charge of all Britain's spying operations abroad. But his wife's entries on the social networking site have exposed potentially compromising details about where they live and work, who their friends are and where they spend their holidays. Amazingly, she had put virtually no privacy protection on her account, making it visible to any of the site's 200million users who chose to be in the open-access 'London' network - regardless of where in the world they actually were.

Laptop search. Website to identify protestors from pictures. Omniveillance. Geolocation. Finding a stolen iPhone. Car hacking. A dummy’s guide to linked data « Kathryn Corrick. Enforcement Update On Misleading Conduct - Information Technology and Telecoms - United Kingdom. Terms & Conditions and Privacy Statement Mondaq.com (the Website) is owned and managed by Mondaq Ltd and as a user you are granted a non-exclusive, revocable license to access the Website under its terms and conditions of use. 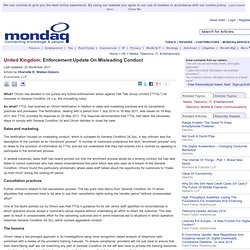 Your use of the Website constitutes your agreement to the following terms and conditions of use. Mondaq Ltd may terminate your use of the Website if you are in breach of these terms and conditions or if Mondaq Ltd decides to terminate your license of use for whatever reason. Use of www.mondaq.com You may use the Website but are required to register as a user if you wish to read the full text of the content and articles available (the Content). Disclaimer. The Sky Is Rising. For years now, the legacy entertainment industry has been predicting its own demise, claiming that the rise of technology, by enabling easy duplication and sharing -- and thus copyright infringement -- is destroying their bottom line. 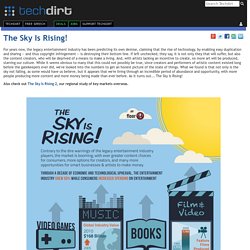 If left unchecked, they say, it is not only they that will suffer, but also the content creators, who will be deprived of a means to make a living. And, with artists lacking an incentive to create, no more art will be produced, starving our culture. Dear online advertisers, stop following me. It’s creepy. When I noticed an online ad promising "The Secrets to Long, Lush Asian Hair" recently, I rolled my eyes. 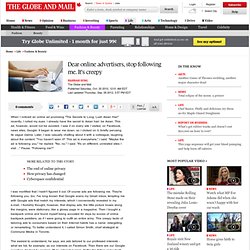 I already have the secret to Asian hair: be Asian. This ad, however, would not be avoided. I saw it on every site I visited, on Facebook, news sites, Google. It began to wear me down, so I clicked on it, briefly perusing its vague claims. Later, I was casually chatting about it with a colleague, laughing about the content.