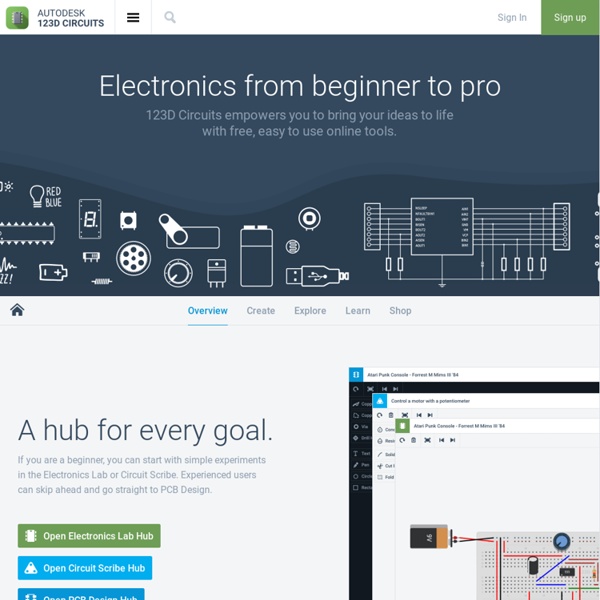 Arduino Tutorial - Lesson 5 We've done a lot so far, blinking lights, printing messages...all of that stuff is output: signals coming from the Arduino. The next step is to start playing with input, with the Arduino responding to outside events. In this lesson we will begin with the most basic kind of input, a push-button switch! You're probably familiar with switches, there's tons of them in your house. One kind of switch you use every day is a light switch. A light switch is a simple device with two positions, on and off.

Wi-Fi Controlled LED Candle / Light Show This project is a wireless full-color electronic candle. Several of these devices can be placed around a room and controlled with a Wi-Fi capable computer to create special effects or music-synchronized light shows. The entire hardware and software design is offered free and open-source.

Proto Shield for Arduino This is a design for an open-source prototyping shield for Arduino NG/Diecimila. It has tons of cool features, to make prototyping on your Arduino easy. Compatible with NG, Diecimila, Duemilanove and any Arduino-clone in the 'classic' shape and pinout.Reset button up topICSP headerLots of GND and +5V rails.DIP prototyping area makes it easy to add more chips.SOIC prototyping area above USB jack for up to 14-pin SOIC chip, narrow medium or wide package.Use 'mini' or 'medium' breadboard.Two 3mm LEDs with matching resistors.Extra 6mm button

SwarmControl SwarmControl, an online game controlling robotic swarms: solve tasks, win stars, help science! The SwarmControl project aims to understand the best ways to control a swarm of robots by a human. The project achieves this through a community of game-developed experts. The project is continuously changed to promote the creation of experts and to become the most effective exploration tool. To achieve this, the project gathers and analyzes data.

Swarm robots - XinCheJian The Goal of Swarm Robots The goal of this project is to BUILD A SWARM OF ROBOTS. In the process of building these robots, we hope that members who participate will also learn different kinds of skills. MicroPython pyboard [v1.0] ID: 2390 - $44.95 The pyboard is a compact and powerful electronics development board that runs MicroPython. It connects to your PC over USB, giving you a USB flash drive to save your Python scripts, and a serial Python prompt (a REPL) for instant programming. Works with Windows, Mac and Linux.MicroUSB cable not included, but you can pick one up from the store!

Guide At present it's possible to sense: AC Electricity (apparent power, current, voltage, real power, power factor), Temperature, Humidity, Pulses (from pulse output utility meters), Elster IrDA (direct utility meter interface) and Solar PV power diversion. We and others are working on extending this list to include moisture, CO2 and other air quality measurements. See the links on the right for application specific guides. This guide the steps to set up a basic system, you will need a base station and at least one sensor node to get it up and running, read through the steps first to work out what hardware you will need for what you want to do. 1) Choose and setup your base station

How to control a Servo In this one, servo is programmed to be controlled by two buttons, one turns servo to the left and the other one turns it to the right. When the servo is turning, corresponding LED will be switched on to indicate the operation. Result: Because Arduino has built-in library for controlling servo, which makes servo a really easy kit to use.