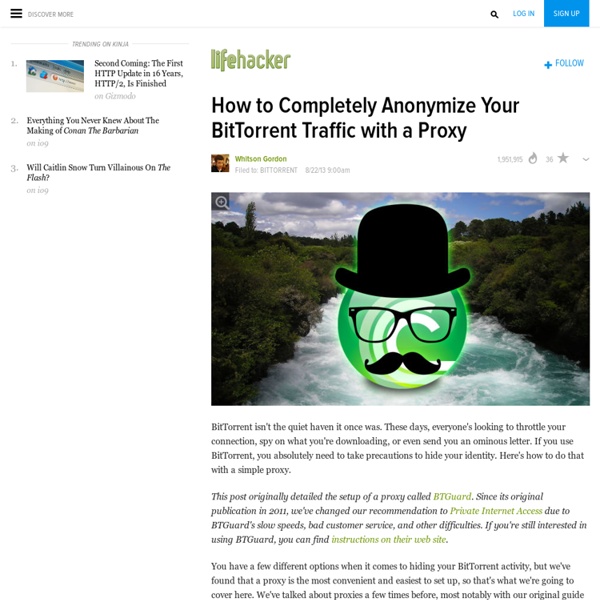 I've used both BTGuard and PIA. PIA is definitely better, but there are a few caveats: 1. They highly recommend that you install their OpenVPN client and from what I can tell, it was the only way their service works reliably. This probably isn't a huge deal to most people, but I would've preferred to use PPTP. When I tried to setup PPTP, it would work sometimes, but was very spotty, very slow speeds, and there were some sites you couldn't visit. 2. After finding out about that, rather than dig deeper to figure out if I could disable the logs, I just cancelled. Flagged

Comment booster votre vitesse BitTorrent et confidentialité First off, why would you suggest that one should stop seeding after a certain point? Isn't the whole of BT based on people continually sharing. If it's all about share ratio for you, you're doing it wrong. Second, why to people keep recommending public blocklists? Improve Your Google Search Skills [Infographic] Don’t limit yourself to just plugging in simple search terms to Google; check out this infographic and learn a search string search or two. You don’t need to limit yourself to searching just for simple strings; Google supports all manner of handy search tricks. If you want to search just HowToGeek.com’s archive of XBMC articles, for example, you can plug in site:howtogeek.com XBMC to search our site. Get More Out of Google [HackCollege via Mashable] Jason Fitzpatrick is a warranty-voiding DIYer who spends his days cracking opening cases and wrestling with code so you don't have to.

Unlock Root Roots Nearly 250 Android Devices in One Click [UPDATED] I can't tell whether you're being sarcastic or not. This was a really tough one. I don't like the way this app does a lot of things. If its code was indeed stolen, I'd like to know from whom, and how—how does one steal code if something is closed source? How Do I Torrent Safely Now That Demonoid Is Down? Newsgroups/Usenet... tons of VIRUSES. Even for Macs. It's like swimming in raw sewage, with a scrapped knee. You go on Usenet, hackers get your machine. It's that simple. Wow.

Welcome Today, we are excited to share that Identified has been acquired by Workday. This is an exciting outcome for everyone involved in Identified and we want to thank our team, Board of Directors, investors, customers, advisors, families and the other countless people that have supported us over the years. Waller Capital served as an exclusive advisor to Identified in this transaction. Since we co-founded Identified out of a shared dorm room at Stanford University in 2010, we have assembled what we believe to be the best group of data scientists and engineers in the industry.

When I start up Windows in 1920x1080 (1080p) portions of the screen are cut off and I can't view them on my DLP HDTV. This is called overscan mode and is a common mode for DLP televisions set by the HDTV manufacturer. Some televisions have a built in mode called "Reduce" which allows you to view the entire Windows desktop, but this mode is not compatible with stereoscopic 3D gaming. However, NVIDIA has a Resize HDTV function available in the NVIDIA control panel which allows users to view the entire Windows desktop and is compatible with 3D stereoscopic gaming. To enable it, follow these instructions: The options on this Resize HDTV Desktop page appear if you have set the NVIDIA Control Panel View menu to Standard.

How to Be an Audiophile on the Cheap This is a terrific post. It's such a bummer to see people brush off "audiophiles" because they think quality sound is out of their price range. Even for people uncomfortable with DIY solutions, like myself, relatively cheap, superb audio is extremely possible. If you do your research you shouldn't have any trouble building an incredible system from scratch (receiver, source, speakers and cables) for well under $1,500.

Headphone Plug Repair « Cocodrilo Labs Goal Your headphones are failing? Sound is intermittent it’s just on one side, or there is no sound at all? The bad habit of storing the headphones still connected to the device is cause number one. Normal pushing, pulling, and bending back and forth is cause number two. 30 Useful (and Unknown) Web Apps You Need to Bookmark - Page 2 FillAnyPDF FillAnyPDF is a fairly simple web app which allows you to upload a PDF file, then easily write on it wherever you want. This allows you to easily fill out any form, even if they’re not in an editable PDF form. Netflix USA - How to Watch Netflix Outside the US Written by Thomas Fals Posted in Netflix 113 comments Post updated on December 24, 2013 If you are travelling abroad the US or simply live outside the US you will soon learn that in order to watch Netflix you need to be a little sneaky.

How to Speed Up, Clean Up, and Revive Your Android Phone The conclusion over at XDA is that JuiceDefender uses more juice than it defends. Another common juice offender is Beautiful Widgets. Turn off Latitude in Google Maps. This is the worst battery drain. Remove auto-updating widgets (e.g., Facebook). Turn off polling within apps.