The Next Privacy Frontier: Geolocation. Hogan Lovells and its team of 60-plus lawyers from the Privacy and Information Management Group are proud to be contributors to the International Association of Privacy Professionals’ Tracker Blog. 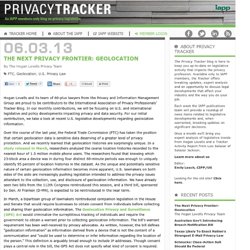 In our monthly contributions, we will be focusing on U.S. and international legislative and policy developments impacting privacy and data security. For our initial contribution, we take a look at recent U.S. legislative developments regarding geolocation information. Over the course of the last year, the Federal Trade Commission (FTC) has taken the position that certain geolocation data is sensitive data deserving of a greater level of privacy protection. And we recently learned that geolocation histories are surprisingly unique. In a study released in March , researchers analyzed the coarse location histories recorded to the nearest hour of 1.5 million mobile phone users. A third geolocation bill is likely to be introduced in coming months. Sen. 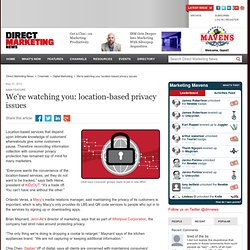 Location-based services that depend upon intimate knowledge of customers' whereabouts give some customers pause. Therefore reconciling information collection with consumer privacy protection has remained top of mind for many marketers. “Everyone wants the convenience of the location-based services, yet they do not want to be tracked,” says Seth Heine, president of KIDzOUT.

“It's a trade off. Orlando Veras, a Macy's media relations manager, said maintaining the privacy of its customers is important, which is why Macy's only provides its LBS and QR code services to people who opt in to the services by signing up or downloading apps. Brian Maynard, Jenn-Air's director of marketing, says that as part of Whirlpool Corporation, the company had strict rules around protecting privacy. “The only thing we're doing is dropping a cookie to retarget,” Maynard says of the kitchen appliances brand. Click to read full Q&A. 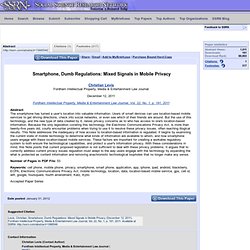 Users of smart devices can use location-based mobile services to get driving directions, check into social networks, or even see which of their friends are around. But the use of this technology, and the new type of data created by it, raises privacy concerns as to who has access to one's location-based information. Number of Pages in PDF File: 53.

PDFArtic.pdf. DotRights location based services/privacy. Droit a l'oubli/geolocalisation. Privacy issues of W3C. FCC report in LBS. WP 29 use of Location based data. Game Changing Legislation for LBS? An international approach. Geolocation IP Address. Geolocation privacy debate. Recent Court Cases on Location Data, Behavio. Geolocation apps draw users, despite privacy concerns. News By Cameron Scott April 3, 2012 07:54 PM ET IDG News Service - Nearly 60% of smartphone users employ apps that access their location data despite having concerns about risks to their privacy and even personal safety, according to a survey conducted by ISACA, a nonprofit group that focuses on risk and security management. 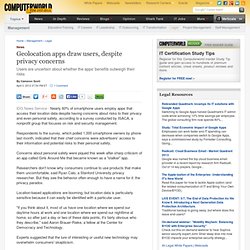 Respondents to the survey, which polled 1,000 smartphone owners by phone last month, indicated that their chief concerns were advertisers' access to their information and potential risks to their personal safety. Concerns about personal safety were piqued this week after sharp criticism of an app called Girls Around Me that became known as a "stalker" app. Researchers don't know why consumers continue to use products that make them uncomfortable, said Ryan Calo, a Stanford University privacy researcher. Location-based applications are booming, but location data is particularly sensitive because it can easily be identified with a particular user.

"It is out there.