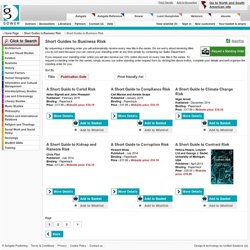 </div> By requesting a standing order you will automatically receive every new title in the series. Do not worry about receiving titles you do not want because you can cancel your standing order at any time simply by contacting our Sales Department. If you request your standing order online you will also receive our 10% online discount on every new title in the series. Www.proactivelaw.org. Short Guides to Business Risk. Papers, Please! Legal Dictionary. Www.federalreserve.gov/pf/pdf/pf_5.pdf. Codification (law) In law, codification is the process of collecting and restating the law of a jurisdiction in certain areas, usually by subject, forming a legal code, i.e. a codex (book) of law. 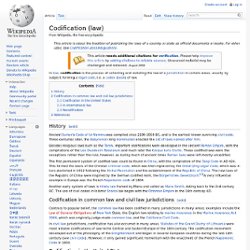 Ancient Sumer's Code of Ur-Nammu was compiled circa 2100-2050 BC, and is the earliest known surviving civil code. 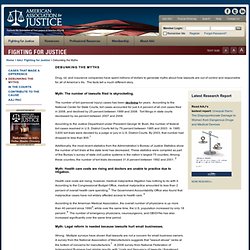 The number of tort (personal injury) cases has been declining for years. According to the National Center for State Courts, tort cases accounted for just 4.4 percent of all civil cases filed in 2008, and declined by 25 percent between 1999 and 2008. Tort filings in state courts decreased by six percent between 2007 and 2008. According to the Justice Department under President George W. State Court Organization Chart. 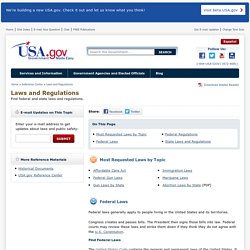 They explain how the agency intends to carry out a law. The Rulemaking Process Federal regulations are created through a process known as rulemaking. By law, federal agencies must consult the public when creating, modifying, or deleting rules in the Code of Federal Regulations. Once an agency decides that a regulation needs to be added, changed, or deleted, it typically publishes a proposed rule in the Federal Register to ask the public for comments.

After the agency considers public feedback and makes changes where appropriate, it then publishes a final rule in the Federal Register with a specific date for when the rule will become effective and enforceable. US Legal System. Welcome. List of country legal systems. Civil law[edit] While the concept of codification dates back to the Code of Hammurabi in Babylon ca. 1790 BC, civil law systems derive from the Roman Empire and, more particularly, the Corpus Juris Civilis issued by the Emperor Justinian ca. 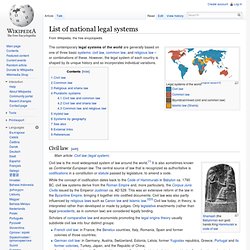 AD 529. This was an extensive reform of the law in the Byzantine Empire, bringing it together into codified documents. Civil law was also partly influenced by religious laws such as Canon law and Islamic law.[2][3] Civil law today, in theory, is interpreted rather than developed or made by judges. Only legislative enactments (rather than legal precedents, as in common law) are considered legally binding. Civil law (legal system)

Legal systems of the world[original research?] Civil law Bi-juridical/mixed (civil and common law) Historically, a civil law is the group of legal ideas and systems ultimately derived from the Code of Justinian, but heavily overlaid by Napoleonic, Germanic, canonical, feudal, and local practices,[3] as well as doctrinal strains such as natural law, codification, and legal positivism. Conceptually, civil law proceeds from abstractions, formulates general principles, and distinguishes substantive rules from procedural rules.[4] It holds case law to be secondary and subordinate to statutory law. When discussing civil law, one should keep in mind the conceptual difference between a statute and a codal article.

The purpose of codification is to provide all citizens with manners and written collection of the laws which apply to them and which judges must follow. Civilian countries can be divided into: Louisiana law. History[edit] 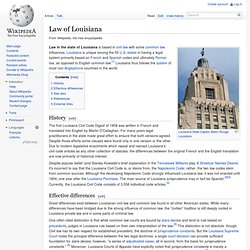 Louisiana Laws. Is Louisiana under Napoleonic law? Louisiana attorneys who've been displaced by Hurricane Katrina are worrying about whether they'll know enough to pass the bar exam in another state. 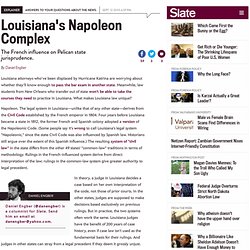 Meanwhile, law students from New Orleans who transfer out of state won't be able to take the courses they need to practice in Louisiana. What makes Louisiana law unique? Napoleon. The legal system in Louisiana—unlike that of any other state—derives from the Civil Code established by the French emperor in 1804. Four years before Louisiana became a state in 1812, the former French and Spanish colony adopted a version of the Napoleonic Code. In theory, a judge in Louisiana decides a case based on her own interpretation of the code, not those of prior courts. Specific laws also reflect Louisiana's Spanish and French roots. Law of Louisiana. History[edit] The first Louisiana Civil Code Digest of 1808 was written in French and translated into English by Martin O'Callaghan. 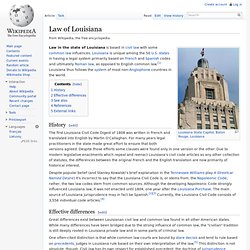 For many years legal practitioners in the state made great effort to ensure that both versions agreed. Despite those efforts some clauses were found only in one version or the other. Due to modern legislative enactments which repeal and reenact Louisiana's civil code articles as any other collection of statutes, the differences between the original French and the English translation are now primarily of historical interest. Effective differences[edit] FRANCE Magazine.