Indian City in Water Crisis as All Four Reservoirs Run Dry (PHOTOS) Chennai, India's sixth largest city, is in the midst of a water crisis as its four main reservoirs are completely dry. 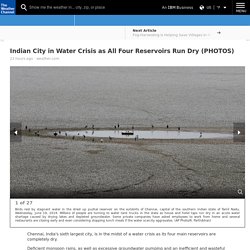 Deficient monsoon rains, as well as excessive groundwater pumping and an inefficient and wasteful water supply system are to blame for the arrival of "Day Zero," the name given to the day that the city ran out of water and taps were turned off. The water shortage has forced the closure of schools, offices and businesses, and taps in homes have run dry. The crisis strikes as the country struggles with a heat wave that has taken dozens of lives. ‘Frightening’ number of plant extinctions found in global survey. Human destruction of the living world is causing a “frightening” number of plant extinctions, according to scientists who have completed the first global analysis of the issue. 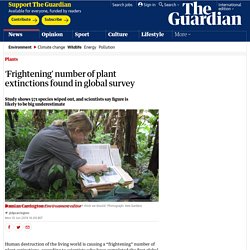 They found 571 species had definitely been wiped out since 1750 but with knowledge of many plant species still very limited the true number is likely to be much higher. The researchers said the plant extinction rate was 500 times greater now than before the industrial revolution, and this was also likely to be an underestimate. 'Single Most Important Stat on the Planet': Alarm as Atmospheric CO2 Soars to 'Legit Scary' Record High.

From ruined bridges to dirty air, EPA scientists price out the cost of climate change. The Science Behind Vanishing Ice - New Immersive Mixed Reality. Researchers Warn Arctic Has Entered 'Unprecedented State' That Threatens Global Climate Stability. Petition to cancel Brexit closes in on 5m signatures. The petition to revoke Article 50 and cancel Brexit has hit five million signatures, a day after a reported million people marched through London to demand a new referendum. 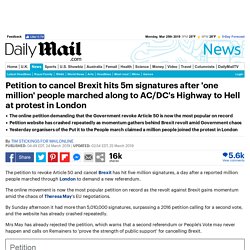 Signs we're experiencing a 6th mass extinction. Non-survivable humid heatwaves for over 500 million people – Climate Guide. The Ocean Is Running Out of Breath, Scientists Warn. The Uninhabitable Earth: David Wallace-Wells on the horrors of climate change.

The Tiny Swiss Company That Thinks It Can Help Stop Climate Change. Later, Wurzbacher told me he wants to offer a “one click” consumer service, perhaps in a year or two, which would expand what they’re doing in Iceland to individual customers and businesses. A Climeworks app could be installed on my smartphone, he explained.

Plummeting insect numbers 'threaten collapse of nature'. The world’s insects are hurtling down the path to extinction, threatening a “catastrophic collapse of nature’s ecosystems”, according to the first global scientific review. 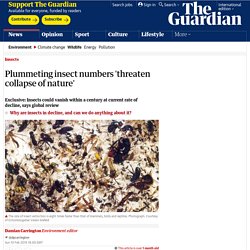 More than 40% of insect species are declining and a third are endangered, the analysis found. The rate of extinction is eight times faster than that of mammals, birds and reptiles. The total mass of insects is falling by a precipitous 2.5% a year, according to the best data available, suggesting they could vanish within a century. The planet is at the start of a sixth mass extinction in its history, with huge losses already reported in larger animals that are easier to study. Himalayan glaciers predicted to melt as global warming bakes Asia. Big mountain climber Adrian Ballinger guides novice climbers to the tallest peaks in the world and has summited Everest eight times in eleven attempts. 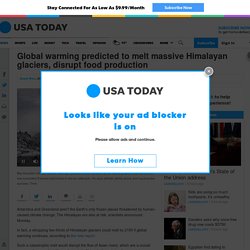 He says athletic ability alone won't guarantee success. Time Antarctica and Greenland aren't the Earth's only frozen places threatened by human-caused climate change: The Himalayas are also at risk, scientists announced Monday. In fact, a whopping two-thirds of Himalayan glaciers could melt by 2100 if global warming continues, according to the new report. 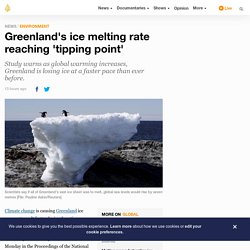 According to research published on Monday in the Proceedings of the National Academy of Sciences, the ice loss in 2012 - more than 400 billion tonnes - reached nearly four times the rate in 2003. The largest sustained ice loss came from southwest Greenland, a region previously not seen as a crucial actor in rising sea levels as it is mostly devoid of large glaciers. "We knew we had one big problem with increasing rates of ice discharge by some large outlet glaciers," said Michael Bevis, the study's lead author and a professor of geodynamics at Ohio State University. Immediate fossil fuel phaseout could arrest climate change – study. Climate change could be kept in check if a phaseout of all fossil fuel infrastructure were to begin immediately, according to research. 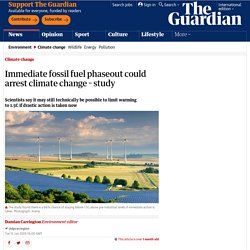 It shows that meeting the internationally agreed aspiration of keeping global warming to less than 1.5C above pre-industrial levels is still possible. 60 Environmental Rules on the Way Out Under Trump. 1. Revoked Obama-era flood standards for federal infrastructure projects This Obama-era rule, revoked by Mr. Trump in August, required that federal agencies protect new infrastructure projects by building to higher flood standards. Building trade groups and many Republican lawmakers opposed it as costly and burdensome. Muslim youth group cleans up national parks amid government shutdown.

Across the country, dozens of their colleagues in the Ahmadiyya Muslim Youth Association were doing the same at national parks closed or partially closed by the shutdown. 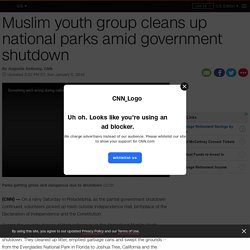 They cleaned up litter, emptied garbage cans and swept the grounds -- from the Everglades National Park in Florida to Joshua Tree, California and the Cuyahoga Valley, Ohio. The group hit the National Mall in Washington on Sunday morning. 40 million Americans depend on the Colorado River. It’s drying up. Prompted by years of drought and mismanagement, a series of urgent multi-state meetings are currently underway in Las Vegas to renegotiate the use of the Colorado River. Seven states and the federal government are close to a deal, with a powerful group of farmers in Arizona being the lone holdouts.

The stakes are almost impossibly high: The Colorado River provides water to 1-in-8 Americans, and irrigates 15 percent of the country’s agricultural products. The nearly 40 million people who depend on it live in cities from Los Angeles to Denver. The river supports native nations and industry across the vast desert Southwest — including 90 percent of U.S. Extinction of much of natural world on the horizon click 2x. The Planet Has Seen Sudden Warming Before. It Wiped Out Almost Everything. Animal species becoming extinct in Haiti as deforestation nearly complete. Species of reptiles, amphibians and other vertebrates are becoming extinct in Haiti as deforestation has claimed more than 99 percent of the country's original wooded areas. 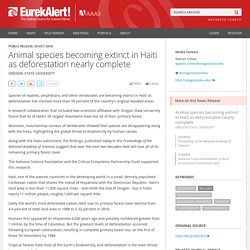 A research collaboration that included two scientists affiliated with Oregon State University found that 42 of Haiti's 50 largest mountains have lost all of their primary forest. Moreover, mountaintop surveys of vertebrates showed that species are disappearing along with the trees, highlighting the global threat to biodiversity by human causes. Along with the mass extinctions, the findings, published today in the Proceedings of the National Academy of Sciences, suggest that over the next two decades Haiti will lose all of its remaining primary forest cover. The National Science Foundation and the Critical Ecosystems Partnership Fund supported this research. Likely the world's most deforested nation, Haiti saw its primary forest cover decline from 4.4 percent of total land area in 1988 to 0.32 percent in 2016. 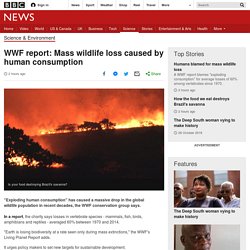 In a report, the charity says losses in vertebrate species - mammals, fish, birds, amphibians and reptiles - averaged 60% between 1970 and 2014. "Earth is losing biodiversity at a rate seen only during mass extinctions," the WWF's Living Planet Report adds. Driven by Trump Policy Changes, Fracking Booms on Public Lands. To proponents, the Trump administration is putting government-owned land to good use, with big returns for taxpayers.

Nationally, oil production on federal lands is rising at an extraordinary pace, jumping 25 percent in the first seven months of this year compared with 2016, the last year of the Obama administration. That boom has driven up government revenue from lease sales and royalties collected from oil and gas production on federal lands, which is shared with the states. Wyoming received $669 million from federal oil, gas and coal sales last year, money it uses to help pay for its schools, roads and other needs. One federal lease sale in New Mexico last month brought in nearly $1 billion worth of bids, more than the total lease sale revenue from all sales nationwide in 2017.

'We have a duty to act': hundreds ready to go to jail over climate crisis. Has American Politics Hit Rock Bottom? If Brett Kavanaugh makes it through, women’s anger will be unstoppable. Crime, not money, drives migration from El Salvador and Honduras. Findings suggest policies should be updated to address current migration pressures. DEF CON 26 voting village report.

Rod Rosenstein: Russia inquiry chief set for Trump showdown. Image copyright Reuters. Rod Rosenstein’s future in question. Correction and update: A previous version of this article said Rosenstein was out, citing reports from other news outlets. The article is now being updated as news develops. It looks like Deputy Attorney General Rod Rosenstein will stay in his post until at least Thursday, when he’s set to meet with President Donald Trump.