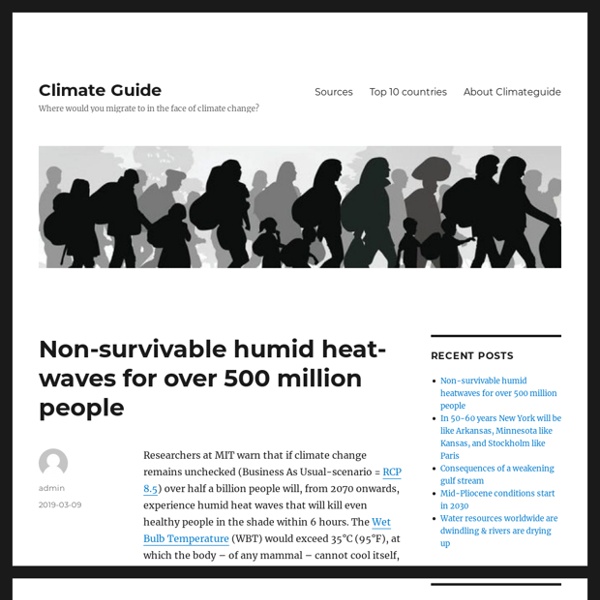 Researchers at MIT warn that if climate change remains unchecked (Business As Usual-scenario = RCP 8.5) over half a billion people will, from 2070 onwards, experience humid heat waves that will kill even healthy people in the shade within 6 hours. The Wet Bulb Temperature (WBT) would exceed 35°C (95°F), at which the body – of any mammal – cannot cool itself, overheats and shuts down. Three regions were studied: China (2018), South Asia (2017) and the Persian Gulf (2015). The researchers predict (at RCP 8.5) WBT exceeding 35°C about once every decade for the Northern Plains in China (400+ million people), at locations in the Chota Nagpur plateau, northeastern India, and Bangladesh in South Asia (70+ million people). Persian Gulf regions that would be affected include cities such as Doha, Qatar, Abu Dhabi, Dubai (UAE) and Bandar Abbas (Iran). The total number of people affected will be higher than 0.5 billion. Would airconditioning be to avail?

People who think their opinions are superior to others are most prone to overestimating their relevant knowledge and ignoring chances to learn more By guest blogger Tom Stafford We all know someone who is convinced their opinion is better than everyone else’s on a topic – perhaps, even, that it is the only correct opinion to have. Maybe, on some topics, you are that person. No psychologist would be surprised that people who are convinced their beliefs are superior think they are better informed than others, but this fact leads to a follow on question: are people actually better informed on the topics for which they are convinced their opinion is superior? This is what Michael Hall and Kaitlin Raimi set out to check in a series of experiments in the Journal of Experimental Social Psychology. The researchers distinguish “belief superiority” from “belief confidence” (thinking your opinion is correct).

African heatwaves could increase ‘five-fold’ with 3C of global warming The number of heatwaves affecting the African continent every year could be five times higher by 2050 as a result of climate change, a new study finds. Global warming of 3C above pre-industrial levels could also alter rainfall patterns across the continent, the research says, which could bring droughts to some countries and an increase in flood risk to others. However, limiting warming to 1.5C – the aspirational goal of the Paris Agreement – could greatly reduce the risk of heatwaves and other climate extremes in Africa, the lead author tells Carbon Brief. Continental countdown The new study, published in Earth’s Future, focuses on how global warming could impact a range of climate variables that tend to have a large effect on human life, including heatwaves, “hot nights” and rainfall intensity. The research finds that any degree of global warming is likely to drive an increase in the number of heatwaves and hot nights across much of Africa by 2050.

The Uninhabitable Earth: David Wallace-Wells on the horrors of climate change “It is, I promise, worse than you think.” That was was the first line of David Wallace-Wells’s horrifying 2017 essay in New York magazine about climate change. It was an attempt to paint a very real picture of our not-too-distant future, a future filled with famines, political chaos, economic collapse, fierce resource competition, and a sun that “cooks us.” Wallace-Wells has since developed his terrifying essay into an even more terrifying book, titled The Uninhabitable Earth: Life After Warming. And it is a brutal read. Wallace-Wells was criticized in 2017 for being too hyperbolic, too doom-and-gloomy.

Circumcision: Social, Sexual, Psychological Realities We continue examining myths about circumcision, including traditions, social and sexual relations. NOTE: Primary author is Lillian Dell'Aquila Cannon (see her blog), with assistance from Dan Bollinger Part 3 article continues after advertisement Myth: You have to circumcise the baby so that he will match his dad. A quantum experiment suggests there’s no such thing as objective reality Back in 1961, the Nobel Prize–winning physicist Eugene Wigner outlined a thought experiment that demonstrated one of the lesser-known paradoxes of quantum mechanics. The experiment shows how the strange nature of the universe allows two observers—say, Wigner and Wigner’s friend—to experience different realities. Since then, physicists have used the “Wigner’s Friend” thought experiment to explore the nature of measurement and to argue over whether objective facts can exist. That’s important because scientists carry out experiments to establish objective facts. But if they experience different realities, the argument goes, how can they agree on what these facts might be?

Plummeting insect numbers 'threaten collapse of nature' The world’s insects are hurtling down the path to extinction, threatening a “catastrophic collapse of nature’s ecosystems”, according to the first global scientific review. More than 40% of insect species are declining and a third are endangered, the analysis found. The rate of extinction is eight times faster than that of mammals, birds and reptiles. Weed killer Roundup increases risks of cancer by 40 percent, UW study finds SEATTLE – Exposure to chemicals in weed killer Roundup increases the risk of some cancers by more than 40 percent, according to a University of Washington study. Researchers found that the link between the most widely used herbicide glyphosate and developing Non-Hodgkin Lymphoma is stronger than previously reported. They examined studies between 2001 and 2018, finding that the risk of developing that type of cancer increases by 41 percent. “This research provides the most up-to-date analysis of glyphosate and its link with Non-Hodgkin Lymphoma, incorporating a 2018 study of more than 54,000 people who work as licensed pesticide applicators,” said co-author Rachel Shaffer, a UW doctoral student in the Department of Environmental & Occupational Health Sciences, in a press release.