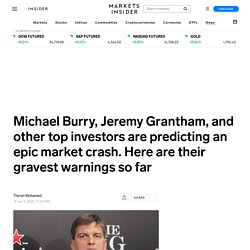 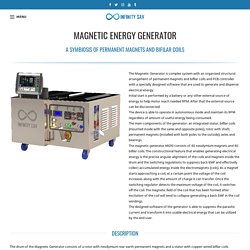 Permanent magnets are uniformly situated along the circumference of the rotor with the same-name and opposite polar poles. Bifilar coils are situated along the circumference of the stator in the same way but with a precise angular alignment to the magnets and parallel-serial connection to each other. A neodymium magnet is the strongest type of permanent magnet commercially available today.

Crystal structure of the neodymium magnet is composed of microcrystalline grains that are aligned in a powerful magnetic field during manufacture so their magnetic axes all point in the same direction. 'Free Basics' Will Take Away More Than Our Right to the Internet. As the TRAI decides the fate of Free Basics, Mark Zuckerberg is in India with ₹100 crore, in pocket change, for advertising. 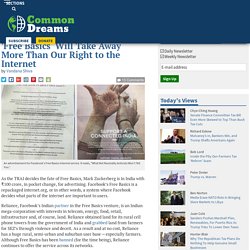 Facebook’s Free Basics is a repackaged internet.org, or in other words, a system where Facebook decides what parts of the internet are important to users. Reliance, Facebook’s Indian partner in the Free Basics venture, is an Indian mega-corporation with interests in telecom, energy, food, retail, infrastructure and, of course, land. Reliance obtained land for its rural cell phone towers from the government of India and grabbed land from farmers for SEZ’s through violence and deceit. As a result and at no cost, Reliance has a huge rural, semi-urban and suburban user base — especially farmers. Adidas baseia estratÃ©gia em influenciadores. 50 Best Board Games of 2017 - Best New Adult Board Games. HSBC escaped US money-laundering charges after UK intervention. The US government decided not to pursue criminal charges against HSBC for allowing terrorists and drug dealers to launder millions of dollars after George Osborne and the UK banking regulator intervened to warn that prosecuting Britain’s biggest bank could lead to a “global financial disaster”. 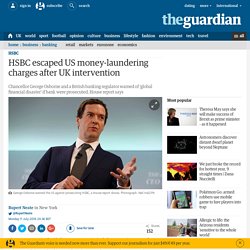 On Monday, a congressional report published letters and emails from Osborne and Financial Services Authority (FSA) officials to their US counterparts warning that launching criminal action against HSBC in 2012 could have sparked a “financial calamity”. The House financial services committee report said the UK interventions “played a significant role in ultimately persuading the DoJ [Department of Justice] not to prosecute HSBC”.

Instead of pursuing a prosecution, the bank agreed to pay a record $1.92bn (£1.4bn) fine. “FSA has been on the phone for the criminal discussions,” officials wrote in emails released in the House report. Everything You Wanted to Know About the DoJ/AP Controversy. Since news that the Justice Department had secretly obtained journalists’ phone records broke, the story has been developing quickly. 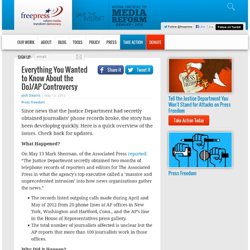 Here is a quick overview of the issues. Check back for updates. What Happened? On May 13 Mark Sherman, of the Associated Press reported : “The Justice Department secretly obtained two months of telephone records of reporters and editors for The Associated Press in what the agency's top executive called a ‘massive and unprecedented intrusion’ into how news organizations gather the news.”

The records listed outgoing calls made during April and May of 2012 from 20 phone lines at AP offices in New York, Washington and Hartford, Conn., and the AP’s line in the House of Representatives press gallery. Growth Hacking. Google glasses. Financial Investment News - Stock Investing News - Investment News - Barrons.com.