CNN: Florida's War on Weeds is Killing Fish and Supercharging Red Tide, Opponents Say. On any given day, a squadron of airboats and helicopters spread out across Florida’s freshwaters to spray tank after tank of toxic herbicide. 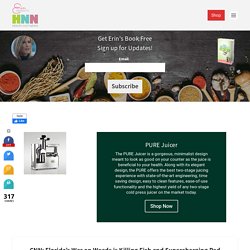 Millions of gallons of poison pour into the state’s rivers and lakes. Officials say without it, Florida would be overcome with weeds. But a growing voice of fishermen, hunters, naturalists, and activists disagree. They are confident that what began as practical navigation and flood control has turned into a million-dollar-a-month chemical addiction that is killing Florida’s natural state. 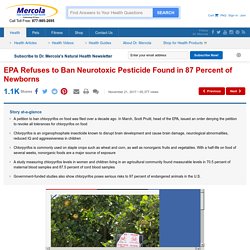 Mercola Exposure to pesticides, herbicides and insecticides has dramatically increased since the introduction of genetically engineered (GE) crops. Want an Efficient and Inexpensive Way to Wash Your Produce? By Dr. 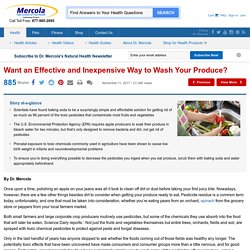 Mercola Once upon a time, polishing an apple on your jeans was all it took to clean off dirt or dust before taking your first juicy bite. Nowadays, however, there are a few other things besides dirt to consider when getting your produce ready to eat. Pesticide residue is a common term today, unfortunately, and one that must be taken into consideration, whether you’re eating pears from an orchard, spinach from the grocery store or peppers from your local farmers market. Both small farmers and large corporate crop producers routinely use pesticides, but some of the chemicals they use absorb into the food that will later be eaten, Science Daily reports.1 Not just the fruits and vegetables themselves but entire trees, orchards, fields and soil, are sprayed with toxic chemical pesticides to protect against pests and fungal diseases.

Only in the last handful of years has anyone stopped to ask whether the foods coming out of those fields was healthy any longer. The U.S. Over 3 Million Acres Damaged by 'Chemical Arson' By Dr. 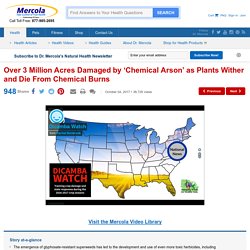 Mercola The lawsuits against chemical technology giant Monsanto are multiplying fast these days. Judge: EPA’s Approval of Bee-Killing Pesticides Violated Federal Law. By Center for Food Safety via Eco Watch A federal court has ruled that the U.S. 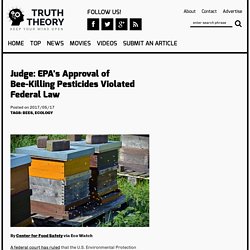 Environmental Protection Agency (EPA) systematically violated the Endangered Species Act—a key wildlife protection law—when it approved bee-killing insecticides known as neonicotinoids. Study: Pesticide Poisoning linked to Endometriosis and Infertility. Endometriosis is a painful and often devastating condition that can cause infertility when a woman’s uterine tissue grows outside the uterus. 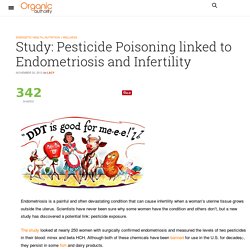 Scientists have never been sure why some women have the condition and others don’t, but a new study has discovered a potential link: pesticide exposure. The study looked at nearly 250 women with surgically confirmed endometriosis and measured the levels of two pesticides in their blood: mirex and beta HCH. Although both of these chemicals have been banned for use in the U.S. for decades, they persist in some fish and dairy products.

Researchers found that women with the highest levels of mirex in their blood had a 50 percent increased risk for endometriosis, and women exposed to high levels of beta HCH had a 30 to 70 percent increased risk. Both these pesticides fall under the broader umbrella group known as organochlorides, of which DDT is the most commonly known example. Related on Organic Authority:

Roundup's Side Effects: Damaged Mitochondria and Sickness. By Dr. 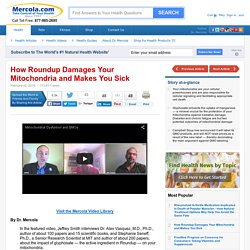 Mercola In the featured video, Jeffrey Smith interviews Dr. Alex Vasquez, M.D., Ph.D., author of about 100 papers and 15 scientific books, and Stephanie Seneff, Ph.D., a Senior Research Scientist at MIT and author of about 200 papers, about the impact of glyphosate — the active ingredient in Roundup — on your mitochondria. As noted by Jeffrey, this is a very important topic, as mitochondrial dysfunction is an underlying foundational element of most diseases. Why the Health of Your Mitochondria Matters As explained by Vasquez, in addition to producing most of your body’s energy in the form of ATP, your mitochondria also participate in many other processes, such as cellular signaling. How Glyphosate Damages Your Mitochondria So how does glyphosate affect your mitochondria? Roundup Formulation Also Interferes With Energy Production. Has Monsanto Covered Up Evidence of Roundup's Health Risks for Decades?

The World Health Organization (WHO) recently declared that glyphosate—the primary ingredient in Monsanto’s herbicide Roundup and other pesticides—a “probable carcinogen.” 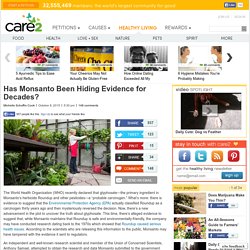 What’s more: there is evidence to suggest that the Environmental Protection Agency (EPA) actually classified Roundup as a carcinogen thirty years ago and then mysteriously reversed the decision. Now, there’s a new advancement in the plot to uncover the truth about glyphosate. This time, there’s alleged evidence to suggest that, while Monsanto maintains that Roundup is safe and environmentally-friendly, the company may have conducted research dating back to the 1970s which showed that Roundup caused serious health issues. Monsanto's Roundup Herbicide Linked to Obesity, Cancer, Heart Disease and Autism. Roundup, the best-selling glyphosate-based herbicide marketed by Monsanto, has been linked to several new health risks including obesity, autism and cancer, according to new research. 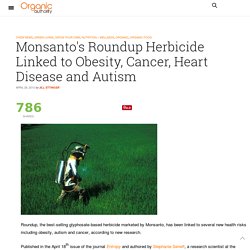