Stephanie Seneff The Troubling Role of Glyphosate in COVID 19. Moms Across America: EPIC EPA FAIL. The EPA’s finding that glyphosate exposure does not cause any health risks is a blatant act of reckless endangerment to public health. 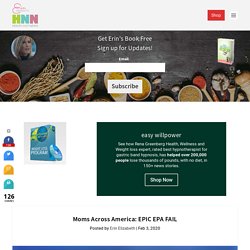 Monsanto Emails: ‘Let’s Beat the S*** Out of’ Moms Worried About Cancer-Linked Weedkiller’ – Collective Evolution. The Facts:Even though Western medical companies have been required to publicly disclose payments to doctors for promotional work over the last five years, there has been a significant rise in these practices, leading to 700 doctors earning more than $1M.Reflect On:Is the entire Western Medical system really a trusted authority and an advocate for human well-being, or is just a business that infallibly puts profits over health? In a very thorough and revealing analysis of statistical industry payment data, ProPublica disclosed that more than 2,500 physicians have received at least half a million dollars apiece from drugmakers and medical device companies in the past five years alone, while more than 700 of those doctors received at least $1 million, and that doesn’t include money for research or royalties from inventions.

One would think so. But that isn’t the current sentiment. Why It Matters. The article then goes on to examine some prominent examples. 100 Percent of Oat Products Tested Positive for Glyphosate. Coors, Miller Lite, Budweiser, Corona, Heineken, all flavored with... Roundup... Can't say the same for a lot of the big brands out there, according to a recent report by U.S. 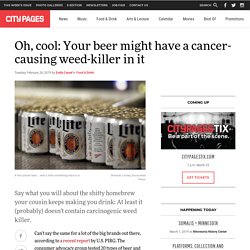 Analysis: EPA ignored scientific research showing Monsanto’s glyphosate causes cancer. Monsanto Forced To Dish Out $289 Million For Lying To The World About Cancer & Glyphosate. The Facts:With the Alex Jones and Infowars ban, the game is changing as to how YouTube, Facebook, Apple and other social media giants feature content. 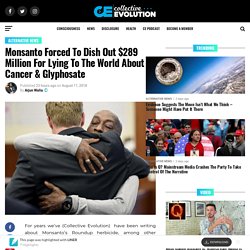 Consumers of news must now be vigilant and proactive in the truth discovery process.Reflect On:As conscious truth-seekers, what standards should we hold media sources, journalists, and corporations to? In the realm of public discourse, are popular pundits and theorists like Alex Jones held to sufficient standards of journalistic integrity? In our quest for truth, we all have intuitions, hunches, and personal insights that we may not be able to prove. Whether it’s spiritual premonitions, conspiracy theories, or superstitious synchronicity, our conscious thought is an explorer in a universe of ideas, possibilities, and theories. The revolutionary ideas that produced the American experiment enshrining the Enlightenment principle of freedom of expression has produced an unchained intellect. EPA in bed with Monsanto / Bayer, burying studies that show glyphosate causes cancer. With so much scientific evidence supporting the fact that glyphosate causes cancer, how can anyone still believe that weed killers that contain it, like Monsanto’s Roundup – now part of Bayer – are somehow safe? 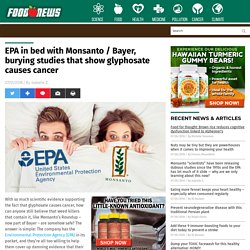 The answer is simple: The company has the Environmental Protection Agency (EPA) in its pocket, and they’re all too willing to help them cover up damning evidence that their products are toxic. The EPA is a government agency, and Monsanto knows that lots of people trust authoritative groups supposedly tasked with “protecting” us. It’s been a mutually beneficial relationship over the years, with a recent piece in Bloomberg Businessweek — hardly part of the “alternative media” — breaking down the dirty details of their dealings over the years. A recent EPA paper put forth as part of a panel in charge of reviewing the agency’s stance that glyphosate doesn’t cause cancer — which caused a lot of controversy among experts. Monsanto “scientists” have been releasing dubious studies since the 1970s and the EPA has let much of it slide — why are we only learning about this now?

Healing from GMOs and Roundup: How to protect yourself and your family. Glyphosate hurts gut microbiome, genes and sexual development at "safe" dose. Popular Weed Killer Toxicity and GMO Labeling Rules Updates. By Dr. 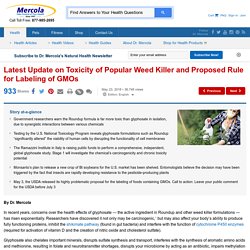 FDA hid glyphosate findings from the public after finding weed killer contamination in nearly ALL food. Arkansas court rules with Monsanto, grants farmers right to spray toxic Dicamba herbicide that causes horrific crop damage to nearby farms. Hundreds of lawsuits against Monsanto are moving forward. (Natural News) Hundreds of lawsuits against Monsanto for personal injury and wrongful death are moving forward, after scientific analysis was heard in court, detailing Roundup’s carcinogenicity. Expert opinion on Roundup’s glyphosate toxicity could be allowed at trial against Monsanto, pending the judge’s final decision. The first trial in the Roundup litigation is set for June 18, 2018, in the Superior Court for the County of San Francisco.

The stakes are high for hundreds of farm families that have lost loved ones to a specific kind of cancer called non-Hodgkin lymphoma. Monsanto caught ghostwriting its own “independent safety reviews” that were published in science journals – NaturalNews.com. Scientist’s ground-breaking research uncovers new risks of GMOs, glyphosate - The Organic & Non-GMO Report. 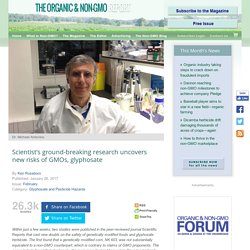 Michael Antoniou Published: January 26, 2017 Within just a few weeks, two studies were published in the peer-reviewed journal Scientific Reports that cast new doubts on the safety of genetically modified foods and glyphosate herbicide. Unveiling the Glyphosate Conspiracy - 15 Highlights with LINER. By Dr. 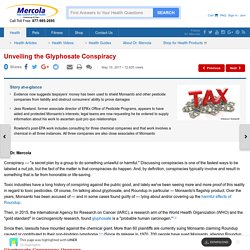 Mercola Conspiracy — "a secret plan by a group to do something unlawful or harmful. " Monsanto&apos;s Mind-Meld; Spin Machine in High Gear. Alternative facts, indeed. 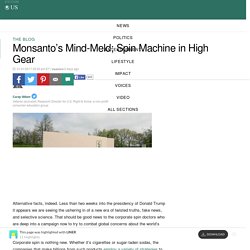 Less than two weeks into the presidency of Donald Trump it appears we are seeing the ushering in of a new era of twisted truths, fake news, and selective science. That should be good news to the corporate spin doctors who are deep into a campaign now to try to combat global concerns about the world’s favorite weed killer. Corporate spin is nothing new. Smoking Gun on EPA's Secret Collaboration With Monsanto. 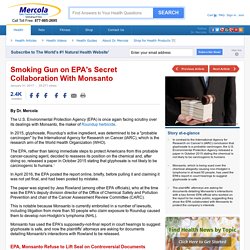 Mercola The U.S. Problem loading page. Roundup in Food: Are You Eating This Toxic Contaminant? By Dr. 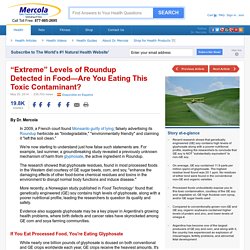 Mercola. Here's Why 'Inert' Ingredients May Be the Most Harmful of All. By Dr. Mercola Glyphosate, the active ingredient in Monsanto's Roundup herbicide, has been the focus of increasing scrutiny after the International Agency for Research on Cancer (IARC) determined it to be a probable human carcinogen. Yet, glyphosate is not the only ingredient in Roundup and other glyphosate-based products, nor is it the only potentially toxic ingredient. The formulation includes a number of so-called inert ingredients as well, and these have largely evaded scrutiny because they were concealed as proprietary "trade secrets. " Monsanto is now facing multiple lawsuits from people who developed non-Hodgkin lymphoma after using Roundup.

Glyphosate exposure causes sunlight to result in aggressive, deadly skin cancers, new science reveals. Glyphosate Discovered In California Wines, Including Those Made With Organic Grapes. Glyphosate is the active ingredient in Monsanto’s Roundup herbicide, which is the most widely used herbicide on the planet. In the past two decades alone, many billions of pounds of this stuff have been sprayed all across America, and billions more all over the world. Moms Across America has initiated multiple tests of glyphosate in water, urine, breast milk, baby formula, and more.

Findings have also been reported in cereal, bread, honey, cow’s milk, soy source, pet food, and beer. According to their report: All ten of the wines tested positive for the chemical glyphosate . . . Glyphosate seems to be everywhere. Monsanto Accused Of Knowingly Polluting SF Bay With Toxic PCBs. Targeting the chemical giant which for decades allegedly polluted the San Francisco Bay with a highly toxic environmental contaminant, the city of Oakland on Tuesday filed suit against Monsanto.

In a press statement announcing the suit, Oakland city attorney Barbara Parker accused Monsanto of concealing information on the dangers of Polychlorinated Biphenyl (PCBs), long before they were banned by U.S. Congress. Parker charges that despite this knowledge, Monsanto continued to produce and distribute these compounds, thus destroying marine ecosystems and threatening human health.

The 5 Main Reasons to Ditch Glyphosate (aka Roundup) The World’s Most Credible Medical Journal Outlines Bad News For Monsanto. Monsanto's RoundUp Chemicals are Lethal, Even in Small Doses. Celiac disease in children nearly tripled in two decades as Roundup spraying increased over 300% (NaturalNews) The missing link behind what causes gluten intolerance and celiac disease, and why prevalence of these two autoimmune conditions has risen dramatically over the past several decades seemingly without cause, may have more to do with how conventional wheat is grown in the U.S. today rather than what it contains naturally.

Like with the massive rise in autism spectrum disorders, the scientific community is trying to explain away the near-tripling of celiac cases over the past 20 years as being a result of improved detection and diagnosis techniques. Many people simply weren't aware that the condition existed back in the 1990s, some scientists claim, dismissing any other outside causes. But the evidence increasingly points to the chemicals applied to modern wheat crops, primarily in the U.S., as a major driver behind this epidemic of supposed gluten allergies. Monsanto's Glyphosate Is Killing Off Monarchs' Favorite Plant.

By Dr. Glyphosate contamination will cause 50% of children to be autistic by 2025, according to researcher. Are you sensitive to gluten, or just Roundup? American wheat often doused with toxic herbicide before harvest.