Fluoride poisoning: The top signs and symptoms to watch out for. (Natural News) Fluoride is known for its many uses especially in dentistry and water treatment. 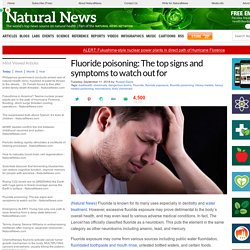 However, excessive fluoride exposure may prove detrimental to the body’s overall health, and may even lead to various adverse medical conditions. In fact, The Lancet has officially classified fluoride as a neurotoxin. This puts the element in the same category as other neurotoxins including arsenic, lead, and mercury. Public health fraud: Why water fluoridation is one of the greatest crimes against humanity. Two Major Legal Victories to End Water Fluoridation. By Stuart Cooper Campaign Director, Fluoride Action Network In November 2016, the Fluoride Action Network (FAN) together with a coalition of organizations and private citizens, including Food & Water Watch, American Academy of Environmental Medicine, International Academy of Oral Medicine & Toxicology, and Moms Against Fluoridation, presented a petition1 to the U.S. 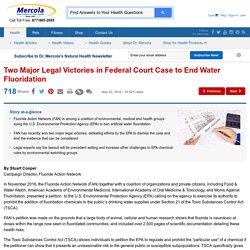 Environmental Protection Agency (EPA) calling on the agency to exercise its authority to prohibit the addition of fluoridation chemicals to the public’s drinking water supplies under Section 21 of the Toxic Substances Control Act (TSCA). FAN’s petition was made on the grounds that a large body of animal, cellular and human research shows that fluoride is neurotoxic at doses within the range now seen in fluoridated communities, and included over 2,500 pages of scientific documentation detailing these health risks. Two Legal Victories as EPA Tries to Dismiss Case and Limit Evidence The lead investigator of this study, Dr.

Fluoride: Poison on Tap - 17 Highlights with LINER. By Dr. 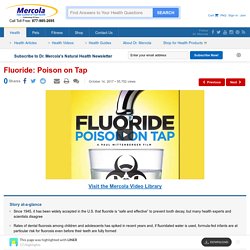 Mercola Today, 74 percent of Americans on community water systems receive fluoridated water.1 Since 1945, it has been widely accepted in the U.S. that fluoride is "safe and effective" to prevent tooth decay. The uncensored truth about fluoride – NaturalNews.com - 12 Highlights with LINER. (Natural News) The Center for Disease Control and Prevention (CDC) calls water fluoridation – the addition of industrial-grade fluoride to community water supplies – “one of the top ten public health achievements of the 20th century.” 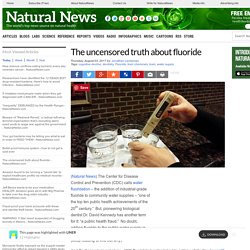 But, pioneering biological dentist Dr. David Kennedy has another term for it: “a public health fraud.” No doubt, adding fluoride to the public water supply is one of the greatest crimes against humanity. (keep reading to find out why) And Dr. Discover the shocking truth about fluoride. Movement to Remove Fluoride From U.S. Water Supplies Continues. By Dr. 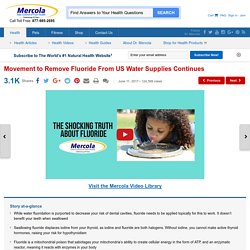 Mercola The U.S. Centers for Disease Control and Prevention (CDC) has declared water fluoridation one of the top 10 greatest public health achievements of the 20th century. Fluoridated Water Destroys Your Brain and Teeth. By Dr. 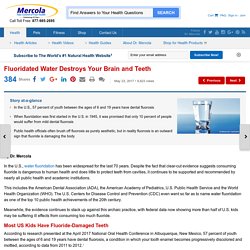 Mercola In the U.S., water fluoridation has been widespread for the last 70 years. Despite the fact that clear-cut evidence suggests consuming fluoride is dangerous to human health and does little to protect teeth from cavities, it continues to be supported and recommended by nearly all public health and academic institutions. This includes the American Dental Association (ADA), the American Academy of Pediatrics, U.S. Public Health Service and the World Health Organization (WHO). Meanwhile, the evidence continues to stack up against this archaic practice, with federal data now showing more than half of U.S. kids may be suffering ill effects from consuming too much fluoride. Most US Kids Have Fluoride-Damaged Teeth The statistic represents an increase from 37 percent reported from 1999 to 2004. EPA whistleblower fired for telling the truth about geoengineering. (Natural News) A former scientist from the US Environmental Protection Agency is now reportedly working with Geoengineeringwatch.org, after being fired by the federal agency for raising concerns about a major threat to public health, namely, geoengineering. 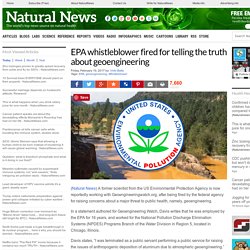 In a statement authored for Geoengineering Watch, Davis writes that he was employed by the EPA for 16 years, and worked for the National Pollution Discharge Elimination Systems (NPDES) Programs Branch of the Water Division in Region 5, located in Chicago, Illinois. Davis states, “I was terminated as a public servant performing a public service for raising the issues of anthropogenic deposition of aluminum due to atmospheric geoengineering.” He says that the issue regarding anthropogenic deposition of aluminum due to atmospheric geoengineering first reared its head in May 2013, when another employee from the NPDES Programs Branch sent a general email to everyone regarding “NPDES and Climate Change.” EPA ignoring other dangers Sources: The EPA Is Being Pressured To Prohibit The Addition of Fluoride Into Public Drinking Water – Collective Evolution. Article flouride. Increasing fluoride levels in drinking water by just 1% can cause 131,000 ADH... 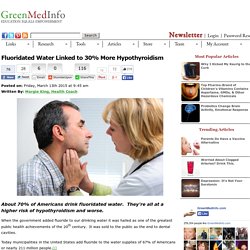 They're all at a higher risk of hypothyroidism and worse. 10 Important Facts About Fluoride You Need to Know. By Dr. 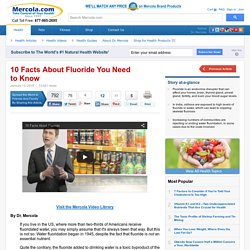 Mercola If you live in the US, where more than two-thirds of Americans receive fluoridated water, you may simply assume that it's always been that way. Why Water Fluoridation Continues, Despite Its Ill Effects. By Dr. 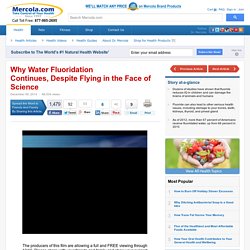 Mercola A majority of Americans consume an "invisible" drug on a daily basis—a drug so harmful it's been proven to cause serious health issues, including damage to your bones, teeth, kidneys, thyroid, and pineal gland. Dozens of studies have shown it reduces IQ in children and damages your brain. Despite that, this drug is so pervasive that over 40 percent of American teens between the ages of 12 and 15 show visible signs of overexposure.1 The drug in question is fluoride—which is added to a majority of municipal water supplies across the US. It's also found in a number of other products, most notably toothpaste and other dental treatments. Drugging Without Consent. Harvard Study Confirms Fluoride Reduces Children's IQ.

August 14, 2012 | 320,920 views Disponible en Español Share By Dr. Mercola A recently published Harvard University meta-analysis funded by the National Institutes of Health (NIH) has concluded that children who live in areas with highly fluoridated water have "significantly lower" IQ scores than those who live in low fluoride areas. "A recent report from the U.S. To summarize the available literature, we performed a systematic review and meta-analysis of published studies on increased fluoride exposure in drinking water and neurodevelopmental delays.

No Naturally Occurring Fluoride Is Added To Drinking Water – See What’s Really Added. The resistance against water fluoridation might be a different story if the naturally occurring element of fluoride was added to our water. Fluoride is found in all natural waters, levels can be very high in groundwater, depending on a number of factors, such as the types of rocks and minerals of that region.

Drinking water is the largest fluoride source. Our tap water, on the other hand, is littered with hydrofluorosilicic Acid, a toxic industrial waste by-product that governments have been adding to our drinking water for over sixty years. Again, we’re not talking about the natural element of fluoride here, we are talking about industrial toxic waste. What Exactly Are We Drinking?

So what exactly are we drinking? For example, in the Phosphate Mining & Production Industry, much of the hydrofluorosilicic acid occurs from strip-mined rock.