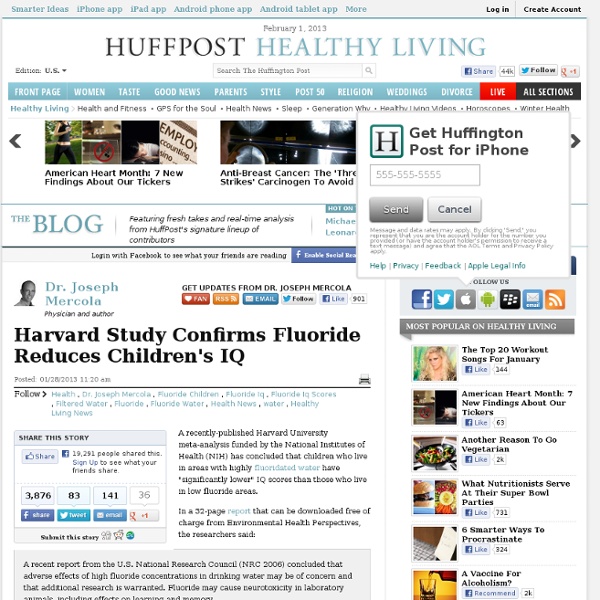 Professional Perspectives on Water Fluoridation In a full length video produced by the Fluoride Action Network, respected professional researchers, scientists, and health practitioners openly discuss their experience and opinions concerning the adverse health effects and ethical problems associated with the public health policy of water fluoridation. Featuring a Nobel Laureate in Medicine, three scientists from the National Research Council’s landmark review on fluoride, as well as dentists, medical doctors, and leading researchers in the field, this professionally-produced 28 minute DVD presents a powerful indictment of the water fluoridation program. Here the list of Professionals included on the video: The 28-minute DVD Professional Perspectives on Fluoridation features the following 15 experts: Lord Baldwin sits as an Independent Peer in the House of Lords, where he has contributed to debates on the environment and health for over 20 years. Arvid Carlsson, PhD, a neuro-pharmacologist. Paul Connett, PhD, an environmental chemist.

Impact of fluoride on neurological development in children July 25, 2012 — For years health experts have been unable to agree on whether fluoride in the drinking water may be toxic to the developing human brain. Extremely high levels of fluoride are known to cause neurotoxicity in adults, and negative impacts on memory and learning have been reported in rodent studies, but little is known about the substance’s impact on children’s neurodevelopment. In a meta-analysis, researchers from Harvard School of Public Health (HSPH) and China Medical University in Shenyang for the first time combined 27 studies and found strong indications that fluoride may adversely affect cognitive development in children. The study was published online in Environmental Health Perspectives on July 20, 2012. The researchers conducted a systematic review of studies, almost all of which are from China where risks from fluoride are well-established. “Fluoride seems to fit in with lead, mercury, and other poisons that cause chemical brain drain,” Grandjean says.

Promising drug candidate for Alzheimer's found in turmeric compound Turmeric comes from the ginger family and, in spice form, is typically used to make curry powder. They publish their results in the journal Stem Cell Research & Therapy. The bioactive compound found in the spice is called aromatic (ar-) turmerone, and previous studies have shown it can block activation of microglial cells. Until this latest study, however, the impact of ar-turmerone's impact on the brain's self-repair ability was unknown, the researchers say. They explain that they focused on endogenous neural stem cells (NSC) - stem cells found in adult brains. To further investigate, the team tested ar-turmerone's effects on NSC in live adult rats by injecting them with ar-turmerone. After using PET imaging and a tracer to find proliferating cells, the team observed that the subventricular zone (SVZ) was wider and the hippocampus expanded in the brains of the rats injected with the compound, compared with those that did not receive the compound. Written by Marie Ellis

How To Detox From Fluoride In today’s world, fluoride is hard to avoid completely. Here’s how to detox your body. Adding fluoride to the water supplies has been called murder on a grand scale. But whether or not your town adds it to your drinking water, you’re probably ingesting this toxin every day. You’re exposed to fluoride if you take prescription drugs like Prozac, swim in pools, or sit in hot tubs. In addition to increasing the risk of death, fluoride alsocalcifies the pineal gland and hardens the arteries. Minimizing your exposure to fluoride is important. Cleansing your system of fluoride is not the same as getting rid of mercury or arsenic. Perchlorate is a man-made molecule combining oxygen and chlorine. According to Dr. Loading the body with iodine displaces fluoride from cell receptors and flushes the fluoride out of the body in urine. Your body can’t make iodine. The best dietary source of iodine is seaweed. Other good iodine sources include seafood (salmon, lobster, scallops, cod and shrimp).

Water Fluoridation Linked to Higher ADHD Rates The study has triggered calls to further research the chemical’s toxicity to the brain. You’ve hit your limit of 5 free articles this month.Try our subscription options: Weekly home delivery with free shipping, access to Newsweek’s web site, and the complete online archive Access to Newsweek’s web site, and the complete online archive Vitamin D for Depression, Dementia, and Diabetes By Dr. Mercola Vitamin D research has repeatedly shown that vitamin D can improve a number of brain disorders, including depression and dementia—the most devastating form of which is Alzheimer's disease. Vitamin D receptors appear in a wide variety of brain tissue early in the fetal development, and activated vitamin D receptors increase nerve growth in your brain. Researchers believe that optimal vitamin D levels may enhance the amount of important chemicals in your brain and protect brain cells by increasing the effectiveness of the glial cells in nursing damaged neurons back to health. Vitamin D may also exert some of its beneficial effects on your brain through its anti-inflammatory and immune-boosting properties. Vitamin D Deficiency Drastically Raises Your Risk for Dementia According to one recent study,1 , 2 seniors who have low vitamin D levels may double their risk of dementia and Alzheimer's disease. The Link Between Depression and Dementia How to Optimize Your Vitamin D Level

6LB Weighted Vest Improve your speed, strength and overall fitness with the comfortable form fitting BodRock Vest. This vest adds resistance to your body weight training, jogging, jumping or other fitness activities without hindering the movement. The breathable design offers adjustable quick release buckles, reflective stripes and a secure pockets. FED EX. A signature is required: for all packages. If the shipping address is a business address, delivery will be attempted only during normal business hours Monday to Friday. Delivery is not available to Puerto Rico, Alaska or Hawaii.

82 Percent of Patients Managed to Avoid Root Canals Using These Ancient Medicinal Herbs Is it really possible to reverse the need for a root canal or a tooth extraction naturally? This is an area where concrete information is hard to come by, but one little known study involving a carefully mixed blend of unique Tibetan herbs traditionally used to supercharge the patient’s circulation is raising eyebrows… Tens of thousands of people submit to their dentists’ advice each year and spend countless dollars on treatment for root canals each year, even though many holistic health researchers question the safety of such procedures. Root canals leave millions of harmful bacteria trapped under the tooth surface and have been linked to higher rates of heart disease, stroke, and many other serious issues, which is why I decided to go a different route than my dentist recommended. I personally opted for a tooth extraction and implant as my course of action, but there actually may be a better and far less invasive way according to results using a natural herbal treatment for root canals.

Strength Training Helps Improve Memory and Lower Dementia Risk By Dr. Mercola The fear of losing cognitive ability tends to overshadow the fear of physical disability; 60 percent of American adults say they are “very worried” or “somewhat worried” about memory loss.1 Chances are, you’re among this majority. The good news is that your brain is a dynamic organ, constantly adapting and changing, for better or for worse. While some activities, such as lack of sleep, can have a detrimental effect on your memory and brain function, a healthy lifestyle will support your brain health over the long haul, and can even encourage your brain to grow new neurons—a process known as neurogenesis or neuroplasticity. It’s Never Too Late for Your Brain to Regenerate Brain Cells Your brain's hippocampus, i.e. your memory center, is particularly adaptable and capable of growing new cells throughout your entire lifetime, even into your 90s, provided you give it the tools to do so! Lifting Weights Improves Memory, Study Shows Exercising After Studying Boosts Retention