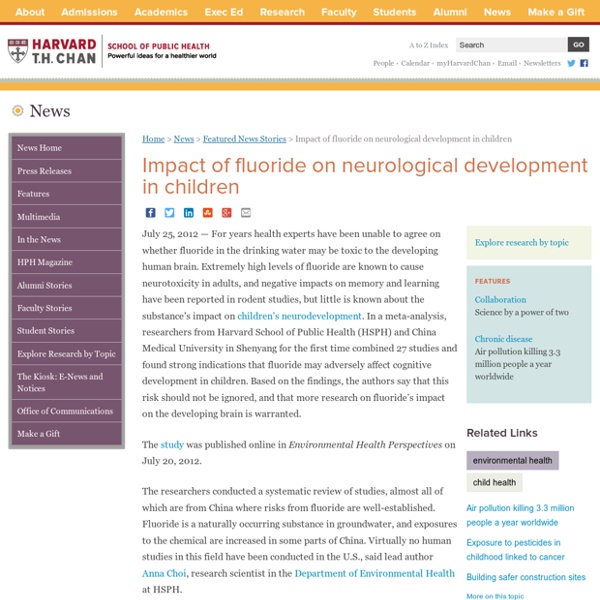 July 25, 2012 — For years health experts have been unable to agree on whether fluoride in the drinking water may be toxic to the developing human brain. Extremely high levels of fluoride are known to cause neurotoxicity in adults, and negative impacts on memory and learning have been reported in rodent studies, but little is known about the substance’s impact on children’s neurodevelopment. In a meta-analysis, researchers from Harvard School of Public Health (HSPH) and China Medical University in Shenyang for the first time combined 27 studies and found strong indications that fluoride may adversely affect cognitive development in children. Based on the findings, the authors say that this risk should not be ignored, and that more research on fluoride’s impact on the developing brain is warranted. The study was published online in Environmental Health Perspectives on July 20, 2012. * This sentence was updated on September 5, 2012. Read a September 2012 statement by the authors.

Does fluoridated water help prevent tooth decay? Or does it cause illness? - Cleveland Plain Dealer Does fluoridated water help prevent toothdecay? Or does it cause illness? How much is too much? Story by FRAN HENRY Photos by BRYNNE SHAW She speaks softly, in pleasant, confident tones. "You don't want people to think you're nuts;' she says. Over the past two years, Schnall, a Bainbridge Township homemaker and the mother of two, has evolved into an anti-fluoride activist. "I don't think the issue is about tooth decay anymore;" says Schnall. don't believe that fluoride is an essential element to prevent tooth decay, and if it were, I still think there's too much out there, and it's linked to other illnesses." She says thousands of studies in medical journals worldwide document links between long-term fluoride ingestion and myriad illnesses and conditions, including thyroid disorders, cancer, mental retardation, osteoporosis, birth defects, infertility, organ failure, lead poisoning and learning disabilities, and an increased incidence of hip fractures in the elderly. Dr.

Coconut Oil How many times must we quote that dark character from the movie (and book), All The President’s Men, by the name of "Deep Throat?" His statement is simple, but charged: "Follow the money." Fats, fats, fats. We are told so much about fats. Fats kill. Fats cause heart disease. The purpose of this article is to break through the junk science we’ve all been spoon fed and bring to light some of the truth about fats. The American Heart Association (and a sundry of organizations supposedly supporting your healthy heart) since the fifties have been telling us to eat margarine and polyunsaturated oils for good heart health. In 1998, the American Heart Association, in the face of overwhelming evidence (and the fact that Americans can actually read) finally came out telling us to limit our intake of trans fats, the main ingredient in margarine. Trans fats are also called partially hydrogenated oils. Here’s a little something I learned from a lecture by Karl Loren: So? Medium chain fatty acid.

Elemental depth profiling of fluoridated hydroxyapa... [Langmuir. 2010 Hemp Building Materials Learn how Hemp Building Materials are used and why! Hemp has had a bad reputation for sometime now. People hear “hemp” and immediately flash to marijuana. Hemp is a very versatile fiber that can be manufactured into a variety of products that resemble wood including fiberboard, wallboard, roofing tiles, insulation, paneling and bricks can even be made from the compressed hurds. You can even make foundations from the compressed hurds. Cited as being half as light, seven times stronger and three times more pliable this superiority in strength and flexibility makes “hempcrete” and ideal building material in earthquake prone zones. Homes can be made nearly 100% out of hemp materials. Hemp has even been used to created hemp-based paints. Building homes out of hemp may cost slightly more than traditional materials but the outcome will be well worth the added costs. It is a safe bet that you would be the talk of the town when you build q home made from hemp.

Hemp Gets The Green Light In New Colorado Pot Measure hide captionHemp products for sale in Washington, D.C., in 2010. The U.S. is the world's largest consumer of hemp products, although growing hemp is illegal under federal law. Colorado recently passed a measure that legalizes growing hemp. Tim Sloan/AFP/Getty Images Hemp products for sale in Washington, D.C., in 2010. With recreational marijuana now legal in Colorado, small-scale pot shops will open up soon in places like Denver and Boulder. Why? As plants, marijuana and hemp look related, and they are. That might be news to farmer Michael Bowman's neighbors. Bowman is from Wray, a small town on the eastern Colorado plains. A Wonder Crop? Bowman will plant 100 acres of hemp this spring on his 3,000-acre farm, where the winter wind now whips across barren wheat and corn fields. hide captionDEA Special Agent Paul Roach says federal law does not distinguish between hemp and marijuana. Courtesy Michael Bowman "We think 100 acres is a good number," he says. A Growing Trend

The Illusion of Reality - Consciousness & Quantum Theory Top Bodybuilder Warns: Don’t Drink The Tap Water! [VIDEO Six time Mr. Olympia champion bodybuilder Dorian Yates warns against drinking fluoride in tap water. Yates explains how fluoride calcifies the pineal gland in the brain, what Rene Descartes called “the seat of the soul,” and claims that it could even be a conspiracy to block humanity reaching higher levels of spiritual awareness. Comments comments

The Worst Noises in the World: Why We Recoil at Unpleasant Sounds « Neuroscience « WiSci | Life Sciences Blog Heightened activity between the emotional and auditory parts of the brain explains why the sound of chalk on a blackboard or a knife on a bottle is so unpleasant. In a study published today in the Journal of Neuroscience and funded by the Wellcome Trust, Newcastle University scientists reveal the interaction between the region of the brain that processes sound, the auditory cortex, and the amygdala, which is active in the processing of negative emotions when we hear unpleasant sounds. Brain imaging has shown that when we hear an unpleasant noise the amygdala modulates the response of the auditory cortex heightening activity and provoking our negative reaction. “It appears there is something very primitive kicking in,” says Dr Sukhbinder Kumar, the paper’s author from Newcastle University. Researchers found that the activity of the amygdala and the auditory cortex varied in direct relation to the ratings of perceived unpleasantness given by the subjects. Most Unpleasant Sounds

Pineal Gland In the 1990s, a British scientist, Jennifer Luke, discovered that fluoride accumulates to strikingly high levels in the pineal gland. (Luke 2001). The pineal gland is located between the two hemispheres of the brain and is responsible for the synthesis and secretion of the hormone melatonin. Melatonin maintains the body’s circadian rhythm (sleep-wake cycle), regulates the onset of puberty in females, and helps protect the body from cell damage caused by free radicals. While it is not yet known if fluoride accumulation affects pineal gland function, preliminary animal experiments found that fluoride reduced melatonin levels and shortened the time to puberty. (Luke, 1997). The Pineal Gland Has Highest Levels of Fluoride in Body As a calcifying tissue that is exposed to a high volume of blood flow, the pineal gland is a major target for fluoride accumulation in humans. Fluoride and Earlier Puberty in Girls Farkas G, et al. (1983).

Farmers hope to plow the way for sustainable U.S. hemp A couple months ago, I asked if industrial hemp would make a resurgence thanks to new legalization and cultural acceptance of cannabis. A real hemp industry could be as much as 10 times bigger than legal marijuana, which is already a potentially $1 billion industry in Washington and $200 million in Colorado. But back in November, farmers were a little skittish. “Yes yes, the U.S. is the biggest consumer of hemp which is pretty damn sustainable compared to other fibers and grows relatively easily without a bunch of pesticides, but the federal government is crazy and they’re giving us so much money for all this corn!” Still, some farmers, like Michael Bowman in Colorado, are determined to cultivate the evil plant. Efforts to plant this seed aren’t just relegated to Washington and Colorado, with their newly legal marijuana. In Kentucky, the hemp-growing capital of the post-prohibition era, legislators are backing an initiative that would put cannabis back in the ground.

Does Pot Cause Mental Decline? A new study casts doubt on previous research linking early marijuana use to drops in IQ. WIKIMEDIA, BOGDAN GIUSCAA study claiming that pot use in youth has long-term cognitive effects is being challenged. The original study, published last year in the Proceedings of the National Academy of Sciences (PNAS), found that smoking marijuana as a teenager may be associated with IQ declines by middle age. The new study, published in the same journal on Monday (January 14), said that IQ declines were likely a product of socioeconomic status, Nature reported. “Although it would be too strong to say that the results have been discredited, the methodology is flawed and the causal inference drawn from the results premature,” Ole Røgeberg, the sole author of the new study and an economist at The Ragnar Frisch Centre for Economic Research in Oslo, wrote in the paper. Other research has shown that in the short-term, marijuana use is related to reversible problems with memory and focus.

Dr. Leonard Coldwell: "Every Cancer Can be Cured in Weeks!" The Secret is Vitamin C! Dr. Leonard Coldwell states that all cancers can be cured within four months. Listen to his reasons behind that statement and how it may be done. Dr. Coldwell also says that you need salt, even if you have high blood pressure. The Sun Prevents Skin Cancer - the Sunscreen Causes It: It goes against most things we hear, but Dr. Dr. Vitamin C proven to help protect Fukushima victims from radiation poisoning, cancer Pretreatment with intravenous vitamin C and other oral antioxidants has been demonstrated once again to provide significant protection against radiation poisoning and cancer. The Orthomolecular Medicine News Service (OMNS) reports that Dr. After taking blood samples from all the men and evaluating them for whole blood count and chemistry, as well as for plasma levels of free DNA and 47 cancer-related gene expressions, Dr. Vitamin C is one of the most powerful nutrients in protecting against cell-damaging free radicals. Further Reference: Natural News;