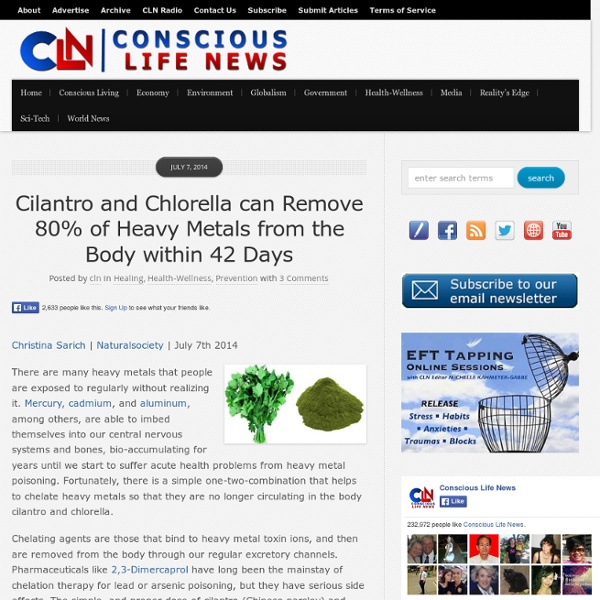 Christina Sarich | Naturalsociety | July 7th 2014 There are many heavy metals that people are exposed to regularly without realizing it. Mercury, cadmium, and aluminum, among others, are able to imbed themselves into our central nervous systems and bones, bio-accumulating for years until we start to suffer acute health problems from heavy metal poisoning. Chelating agents are those that bind to heavy metal toxin ions, and then are removed from the body through our regular excretory channels. Dr. “Many health practitioners use synthetic chelating agents such as DMPS, DMSA, EDTA and others to mobilize and eliminate heavy metals from the body. Cilantro is best used in conjunction with chlorella because it, “mobilizes more toxins then it can carry out of the body, it may flood the connective tissue (where the nerves reside) with metals, that were previously stored in safer hiding places.” The properties of chlorella lend themselves nicely to aiding cilantro for detoxifying the body: Related:  azfinebear

The Spice That Prevents Fluoride From Destroying Your Brain Sayer Ji | Activistpost | April 8th 2014 Fluoride is found everywhere today, from antibiotics to drinking water, no-stick pans to toothpaste, making exposure inevitable. All the more reason why new research proving this common spice can prevent fluoride damage is so promising! Fluoride’s neurotoxicity has been the subject of academic debate for decades, and now a matter of increasingly impassioned controversy among the general public, as well. From ‘conspiracy theories’ about it being first used in drinking water in Russian and Nazi concentration camps to chemically lobotomize captives, to its now well-known IQ lowering properties, to its ability to enhance the calcification of the pineal gland – the traditional ‘seat of the soul’ – many around the world, and increasingly in the heavily fluoridated regions of the United States, are starting to organize at the local and statewide level to oust this ubiquitous toxicant from municipal drinking water. The study concluded, Discussion Notes:

Fluoride Detox | Here's How to Get it Out of Your System Experts have been warning for years against the dangers of sodium fluoride, but recently more awareness has spread than ever before. Following the rampant success of essential news stories centered around fluoride, including a story I authored just three short days ago highlighting the horrendous amount of sodium fluoride in doctor recommended toothpaste (500,000% higher than fluoridated water), it’s now important to discuss how to actually get it out of your system through fluoride detox. Even if you somehow managed to escape the ingestion of fluoridated water in your younger years, chances are you’ve been exposed to food items that actually can contain about 180 times the sodium fluoride content as fluoridated water according to fluoride expert Jeff Green. This has to do with how what’s known as aluminum fluoride, or Cryolite. Used as a pesticide due to its ability to kill bugs, conventional farmers will oftentimes spray excessive amounts of the sticky substance onto crops. Selenium

Portuguese How To Crack A Wi-Fi Network's WPA Password With Reaver Your Wi-Fi network is your convenient wireless gateway to the internet, and since you’re not keen on sharing your connection with any old hooligan who happens to be walking past your home, you secure your network with a password, right? Knowing, as you might, how easy it is to crack a WEP password, you probably secure your network using the more bulletproof WPA security protocol. Here’s the bad news: A new, free, open-source tool called Reaver exploits a security hole in wireless routers and can crack most routers’ current passwords with relative ease. Here’s how to crack a WPA or WPA2 password, step by step, with Reaver — and how to protect your network against Reaver attacks. In the first section of this post, I’ll walk through the steps required to crack a WPA password using Reaver. First, a quick note: As we remind often remind readers when we discuss topics that appear potentially malicious: Knowledge is power, but power doesn’t mean you should be a jerk, or do anything illegal.

4 Things You Thought Were True About Time Management - Amy Gallo by Amy Gallo | 1:00 PM July 22, 2014 I don’t know anyone who doesn’t struggle with how to make the most of their time at work. How do you stay on top of an overflowing inbox? How do you get work done when your day is taken up by meetings? To make matters worse, there are lots of misconceptions about what time management really comes down to and how to achieve it. It’s about managing your time. Time management is a misnomer, says Jordan Cohen, a productivity expert and author of “Make Time for the Work That Matters.” Teresa Amabile, the Edsel Bryant Ford Professor of Business Administration at Harvard Business School and coauthor of The Progress Principle, whose expertise in this area comes from reading the work diaries of thousands of workers who documented their struggles to get work done, says it’s more about managing your overall workload. You just need to find the right system or approach. “Having a system can be useful, but it takes more than that,” says Amabile.

Reducing Reactivity in Dogs - The Pawfectionist Dogs react to many different things for many different reasons. The most common one I am faced with is dogs that are fearfully reactive to other dogs. Owners have tried socialising the dog with other dogs, keeping away from other dogs at all costs, telling the dog off, rewarding the dog and everything in between to help fix this problem without success. My aim for this article is to help you with your reactive dog by giving you some simple easy to remember tips that should set you on the right path to reducing your dogs reactivity. 1. The Cycle of Reactivity > Reaction > Reinforcement > Repetition When your dog reacts toward another dog by lunging, snapping, growling or barking, it is doing so in an attempt to scare the dog away. In order to resolve this issue we need to change the way your dog perceives the situation, what he thinks will keep him safe and as a result, his behaviour. 2. Signs your reactive dog is not comfortable in the presence of other dogs: - high tail - high on toes 3. 4.

Stop Puppy Whining, Crying, Whinging or Screaming Fast! How To Stop Dog Whining So you've got a whinging, whiny little puppy or older dog - it's got to be one of the most annoying and frustrating sounds of all doesn't it? Firstly I should say that this whining is a perfectly natural behavior for a young puppy - it is how they get attention from their mother from a very early age. It's when the whining or crying drags on and on and becomes a long term persistent habit that it becomes a problem for us dog lovers. The best solution to this whining, screaming or whinging behavior is to tackle it immediately, ideally before it establishes itself as an ingrained habit - try to nip it in the bud as they say. Always be fair, understanding and reasonable with a young puppy. Never forget that your puppy is a sociable little creature who hates to be left isolated and alone. There are many measures you can put into place right now to help quieten your whiny little beast down. "Puppy Whining/Crying Increases With Reinforcement and Decreases Without Reinforcement"

Tracking the Internet of Things