The pineal gland: your connection to the Universal Matrix 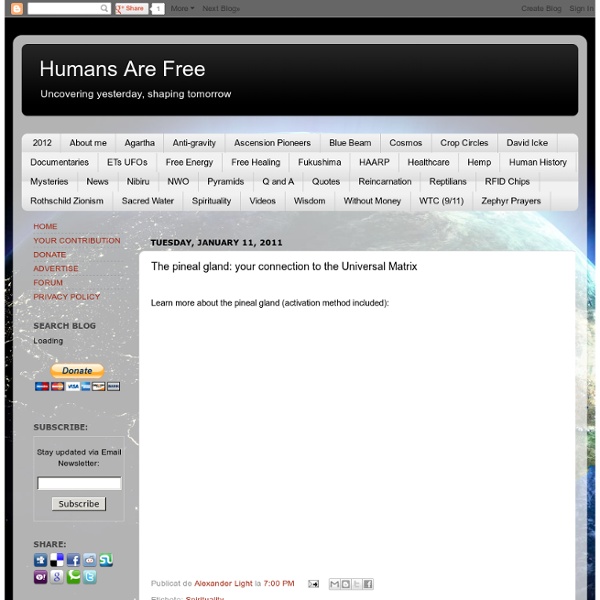 How to Decalcify and Detoxify the Pineal Gland Anna Hunt, Staff WriterWaking Times The pineal gland, an endocrine gland located in the brain, is said to be the seat of the soul. Also referred to as the Third Eye, this small gland is believed to be involved in reaching higher levels of consciousness, acting as a gateway to dimensions beyond our brain-created reality. For the people that seek to fully activate their spiritual potential and tap into the power of the pineal gland, one must begin by strengthening its function though detoxification and proper nutrition. Below is a list, in no particular order, of 8 supplements that will boost your pineal gland function, help in its decalcification, and support you on your journey of personal and spiritual cultivation. 1. The pineal gland already produces the hormone melatonin, which affects the body’s circadian rhythms of waking and sleeping. Recommended products: NOW Foods Melatonin 5mg Vcaps Natrol Liquid Melatonin 2. Joy of the Mountains Oregano Oil (100% Certified Organic) Resources: 3.

Pineal Gland The pineal gland, also known as the pineal body, conarium or epiphysis cerebri, is a small endocrine gland in the vertebrate brain. It produces melatonin, a serotonin derived hormone, which affects the modulation of sleep patterns in both seasonal and circadian rhythms.[1][2] Its shape resembles a tiny pine cone (hence its name), and it is located in the epithalamus, near the center of the brain, between the two hemispheres, tucked in a groove where the two halves of the thalamus join. Nearly all vertebrate species possess a pineal gland. The gland has been compared to the photoreceptive, so-called third parietal eye present in the epithalamus of some animal species, which is also called the pineal eye. René Descartes believed the pineal gland to be the "principal seat of the soul" and viewed it as the third eye.[6] Structure[edit] Blood supply[edit] Innervation[edit] The pineal gland receives a sympathetic innervation from the superior cervical ganglion. Histology[edit] Development[edit]

Articles - Fluoride & the Pineal Gland: Study Published in Caries Research Fluoride & the Pineal Gland: Study Published in Caries Research International Fluoride Information Network March 27, 2001 IFIN Bulletin #269: Fluoride and the pineal gland. Luke published. Dear All, The wheels of science grind very slowly. Finally, the first half of the work that was the subject of Jennifer Luke's Ph.D. thesis; presentation in Bellingham, Washington (ISFR conference) in 1998 and a videotaped interview I had with her (see www.fluoridealert.org/videos.htm), has been published in Caries Research (see abstract below). In my view this work is of enormous importance and could be (or should be) the scientific straw that breaks the camel's back of fluoridation. Many of our subscribers are familiar with the details but let me repeat them here. The one activity that Luke is particularly interested in is the onset of puberty. I have a copy of Luke's Ph.D. thesis and would be willing to share it with those who have a serious scientific interest in this issue.

The Pineal Gland - The "Seat of the Soul"? Wonderful article, that needs to be shared! Entirely by Gary Vey (viewzone.com), After writing se... Wonderful article, that needs to be shared! After writing several articles on reincarnation and enlightenment, many readers asked me why I never mentioned the significance of the pineal gland -- a small structure about the size of a pea, located in the middle of the brain. Descartes was obsessed with understanding who we are. He observed that the senses can be fooled, that most of what we think we know is really illusion and finally struggled with the possibility that our own identity as individuals was also not real. His famous statement endures: Cogno ergo sum -- I think, therefore I am. Although the soul is joined with the entire body, there is one part of the body [the pineal] in which it exercises its function more than elsewhere... Today, with an understanding of computers, we might take issue with Descartes. "All psychic systems have their physical aspects in the body . . .