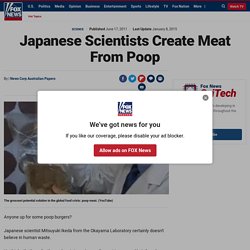 (YouTube) Anyone up for some poop burgers? Japanese scientist Mitsuyuki Ikeda from the Okayama Laboratory certainly doesn't believe in human waste. He thinks that's perfectly good protein you're sending out to sea, and he's found a way to extract it, mix it with steak sauce and create a fecal feast fit for a king. And despite the downside of having to add soya to bind it all together, Prof Ikeda thinks there's no reason why we shouldn't all tuck into his turd burgers. Why would he even think of it, you might ask. Because Tokyo Sewage asked him to. Prof Ikeda found the mud was loaded with protein due to the high bacteria content. According to Digital Trends, it's 63 percent protein, 25 percent carbohydrates, 3 percent lipids and 9 percent minerals. Microplastics In Seafood Raise Serious Concerns. 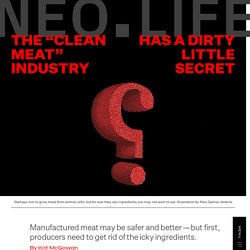 These days, that idea is attracting investors and entrepreneurs, too. This isn’t your (vegan) father’s Tofurky. More than a dozen companies worldwide are working on slaughter-free meatballs, tenders, or simple ground beef, chicken, fish, or pork made by growing muscle tissue in a cell culture. Big Ag powerhouses like Cargill and Tyson Foods have put money behind it. And at least one company, Just Foods, says it will have a product, likely bird-based, ready for market by the end of the year — although the company says whether it can sell the faux fowl will be up to regulators. You Won't Believe What's Really In Cow Milk...We've Been Lied To□☠□ Top 10 Secrets The Food Industry Doesn't Want You To Know. New 3D Printed Burgers Made of Your Own Stem Cells. Farmed Norwegian Salmon World’s Most Toxic Food. Whats in the Meat? Samples Verify Alien DNA in 20% Tested a Mystery.

The Dangers of Farmed Fish. You may have heard that eating fish is a healthy option. 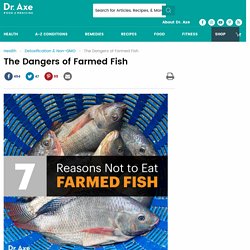 Why Farmed Salmon Is One Of The Most Toxic Things You Can Put In Your Body. We're creating viewer supported news. 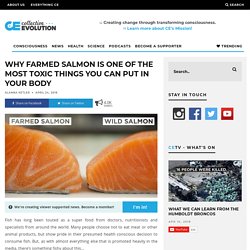 Become a member! Fish has long been touted as a super food from doctors, nutritionists and specialists from around the world. Many people choose not to eat meat or other animal products, but show pride in their presumed health conscious decision to consume fish. But, as with almost everything else that is promoted heavily in the media, there’s something fishy about this… The Perils of Dairy. Pasteurized vs. Homogenized Milk: What's The Difference? You've heard the terms before, but do you really know what "pasteurized" and "homogenized" mean when it comes to milk? 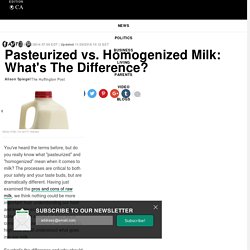 The processes are critical to both your safety and your taste buds, but are dramatically different. Having just examined the pros and cons of raw milk, we think nothing could be more important than understanding our food and knowing exactly how it gets to our table. Yogurt Product Buyers Guide. GMOs In Cheese? Yes - Live Toxic Free. Instead of giving you a recipe today, I want to invite you to explore making your own cheese. 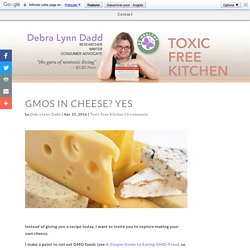 I make a point to not eat GMO foods (see A Simple Guide to Eating GMO-Free), so I was surprised to learn this week that 90% of commercial cheese is made with GMO rennet. Furthermore, GMO rennet is approved by the FDA (and Generally Recognized As Safe) and not even recognized by GMO activists as something that needs to be on the label! You can read the whole story here.

But here’s the part I think is most important. Originally, cheese presented itself to the world after someone, somewhere carried milk in the stomach of an animal. Rennet is a by-product of the veal industry. In the late 1980s, scientists transferred a single gene from bovine cells that codes for chymosin into microbes, giving microbes the ability to produce the chymosin coagulant that was previously only available from animals. Variant Creutzfeldt-Jakob disease. Deformed Fish Being Found In Heavily Fished Area, Contaminated by Nuclear Waste. Bill Gates GMO Zombie Eggs. (NaturalNews) Are you eating fake eggs made in a laboratory? 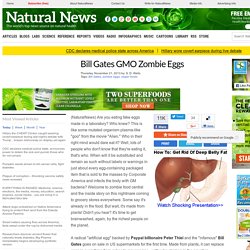 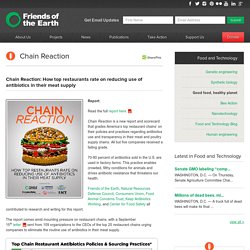 Chain Reaction is a new report and scorecard that grades America’s top restaurant chains’ on their policies and practices regarding antibiotics use and transparency in their meat and poultry supply chains. All but five companies received a failing grade. 70-80 percent of antibiotics sold in the U.S. are used in factory farms.

This practice enables crowded, filthy conditions for animals and drives antibiotic resistance that threatens our health. Friends of the Earth, Natural Resources Defense Council, Consumers Union, Food Animal Concerns Trust, Keep Antibiotics Working, and Center for Food Safety all contributed to research and writing for this report. Avoid eating these 11 types of fish to reduce your exposure to mercury. (NaturalNews) By limiting your intake of certain fish, and eating complementary foods that remove mercury from your system, you can enjoy the benefits of consuming seafood without endangering your health, as revealed in Mike Adam's new book, Food Forensics, which will hit all the major booksellers on July 26. 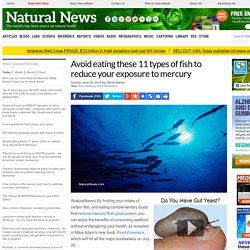 Mike "The Health Ranger" Adams is the founder/editor of Natural News, and his new book, Food Forensics: The Hidden Toxins Lurking in Your Food and How You Can Avoid Them for Lifelong Health, contains valuable information regarding mercury levels in fish, as well as how to keep your exposure at safe levels without having to give up eating seafood altogether. Balancing the risks and benefits of eating fish The health benefits of a diet that includes fish are well-known. Nearly all fish contain mercury, however, so it's important to know which fish contain the highest levels.

From Food Forensics: And now for the good news ... Sources: Why You Should Never Eat Pork. There are many religions that specifically forbid the consumption of pork. 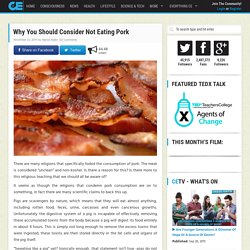 The meat is considered “unclean” and non-kosher. Is there a reason for this? Is there more to this religious teaching that we should all be aware of? It seems as though the religions that condemn pork consumption are on to something, in fact there are many scientific claims to back this up. Pigs are scavengers by nature, which means that they will eat almost anything, including rotten food, feces, urine, carcasses and even cancerous growths. Chemical added to hot dogs, sausage and bacon now being developed by USDA as deadly bait that poisons wild hogs to death... and you're EATING it for breakfast!

(NaturalNews) A preservative chemical that's routinely added to hot dogs, beef jerky, bacon and breakfast sausage is now being deployed by government researchers as a fatal bait to poison wild hogs to death. Development of the deadly hog poison is being pursued by none other than the U.S. Department of Agriculture, the same agency that legalizes the same toxic chemical to be used in processed meat products approved for human consumption. The Long Time Cover-Up Regarding Processed Meats. Photo credit: bigstock.com You might not know it, but there is one chemical that is added to almost every single processed meat sold in America today – nitrites and other synthetic chemicals that are designed to cure meat are added so that they do not spoil quickly.

But did you know that the FDA has approved these chemicals, even though they have known for decades that they cause cancer? After years of denial, the University of Wisconsin has uncovered the fact that the Federal Food and Drug Administration has known, since at least the early 1970’s, that nitrites cause cancer. OMG! SOYLENT GREEN IS REAL. 15 Horrifying Facts About Processed Meat. The dairy controversy - The suppressed truth revealed.

(NaturalHealth365) Let’s face it: The world is waking up to the dangers associated with pasteurized milk. But, as conventionally-produced milk demands are declining, we see a growing interest in locally-grown, farm products – including raw milk. So, the question remains: Is milk a health problem or not? What really causes milk allergies? On the next NaturalNews Talk Hour, Jonathan Landsman and Mark McAfee, Founder of Organic Pastures dive deep into the topics of lactose intolerance, food allergies, gut health plus the suppressed truth about modern milk production. SUPERMARKET SECRETS & DECEPTIONS PART 1 (Full Video) Yogurt exposed for its highly toxic ingredients. (NaturalHealth365) A favorite snack to millions, yogurt has made several top 10 health lists – including Food Network’s 10 Snacks Under 250 Calories.

You may even love it for its power-packed protein, bone-building calcium, and beneficial gut-boosting probiotics. Opting for a healthy snack is admirable for those who are health conscious, but do you really know what’s in the yogurt you eat? Recently, the Cornucopia Institute came out with a new report criticizing the yogurt industry – especially major brands – for turning health food into junk food.

Top 15 Contaminated Fish You Shouldn't be Eating. Photo credit: bigstock It used to be that eating seafood and fish regularly was a pretty safe nutritional bet. Fish was packed with protein, healthy monounsaturated fats, omega-3 fatty acids, all those good things (read more about benefits of fish oil). Unfortunately, due to our continued poisoning of the environment and the Fukushima power plant meltdown, many fish are now loaded with unsafe levels of mercury and radiation.

All fish, every single fish on this planet, have some level of mercury; however, some have much higher levels than others. Take a look at our list of the top 15 most contaminated fish on the market today. This means any type of meat eating shark such as Longfin Mako, Shortfin Mako, Blacktip, or common Thresher shark. It’s ironic that many people eat shark products such as soups, health drinks, pill supplements, and even shark steaks, believing that shark is a healthy meat.

There Is A Staggering Amount Of Feces In Our Food. Harvard Scientists Urge You to Stop Drinking Milk. FDA Finally Admits Chicken Meat Contains Cancer-Causing Arsenic. America’s Favorite Meat Is Also One of Its Most Lethal Commodities. Contaminated chickens from China sold to Americans. USDA to allow U.S. to be overrun with contaminated chicken from China. Why Is Ractopamine Banned in 160 Countries? Want some ractopamine with your cheeseburger? See the list of drugs the USDA still allows to be used in cattle. USDA approves horse slaughterhouse to produce meat for human consumption. Hey Look! It’s That Little American “Farm” Where Your Cheese Comes From. Skynet factories to churn out test tube beef as 'Bloomburgernator' robots force humans to eat artificial protein patties.

8 Shocking Facts about Bovine Growth Hormone. Slaughterhouse Allegedly Sold Meat from Cancer-Stricken Cows. U.S. treating meat with ammonia, bleach and antibiotics to kill the '24-hour sickness' Like that skim milk? You're essentially drinking pig slop. How marinating your meat can help you avoid getting cancer. DIRTY Little SECRET about MEAT. 9 Million Lbs. of “Diseased and Unsound” Meat May Have Reached 35 States, Says USDA.