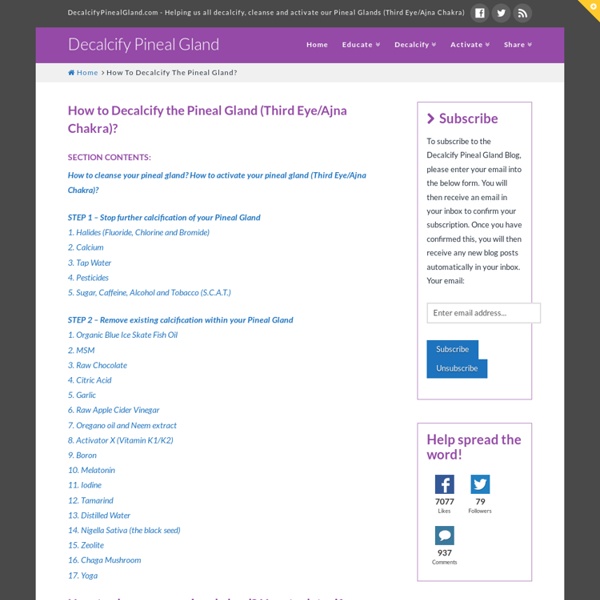 5 Tips to Avoid Becoming a Chronic Worrier People are experts at turning themselves into chronic worriers—and often without knowing they’re doing it. The problem is that when you’ve turned yourself into a chronic worrier, it’s then very difficult to become a nonworrier again! So why not try to identify those patterns of behaviour that are likely to contribute to making you a chronic worrier, become aware of them, and then try to manage those activities? Here are five factors that are likely to contribute to you developing unmanageable worrying. 1. 2. 3. 4. 5. Editors note: Original article can be found here. Credit:

Pineal gland The pineal gland, also known as the pineal body, conarium or epiphysis cerebri, is a small endocrine gland in the vertebrate brain. It produces melatonin, a serotonin derived hormone, which affects the modulation of sleep patterns in both seasonal and circadian rhythms.[1][2] Its shape resembles a tiny pine cone (hence its name), and it is located in the epithalamus, near the center of the brain, between the two hemispheres, tucked in a groove where the two halves of the thalamus join. Nearly all vertebrate species possess a pineal gland. The gland has been compared to the photoreceptive, so-called third parietal eye present in the epithalamus of some animal species, which is also called the pineal eye. René Descartes believed the pineal gland to be the "principal seat of the soul" and viewed it as the third eye.[6] Structure[edit] Blood supply[edit] Innervation[edit] The pineal gland receives a sympathetic innervation from the superior cervical ganglion. Histology[edit] Development[edit]

Quantum interaction: 10,000 times faster than light Robert Fickler / University of Vienna This is a false-color image of a laser beam showing a superposition of entangled photons spinning in opposite directions. By Jesse EmspakLiveScience How fast do quantum interactions happen? Faster than light, 10,000 times faster. That's what a team of physicists led by Juan Yin at the University of Science and Technology of China in Shanghai found in an experiment involving entangled photons, or photons that remain intimately connected, even when separated by vast distances.They wanted to see what would happen if you tried assigning a speed to what Einstein called "spooky action at a distance." They didn't find anything unexpected, but that wasn't the point: in physics, sometimes it's good to be sure. All tangled upQuantum physicists have long known that after two particles — photons, for example — interact, they sometimes become "entangled." When photon A is observed, it has a certain polarization, perhaps "up."

Reiki Healing With Crystals Crystals used during Reiki Healing will help the healing and energy balancing. They will speed up the healing process. The purpose of a laying on of stones is to release etheric, emotional, mental or spiritual blocks to well-being. The healer's role is to be comforting, supportive and non- judgmental, giving the client safety to release these emotions and talk. This is part of the healing process. If the stone does not feels uncomfortable during the Reiki healing with crystals it should be moved or removed. Learn more how to choose and cleanse your crystals for Reiki healing with crystals. One of the simplest ways to help balance the whole chakra system is to place a stone of the appropriate colour on each area. It is believed that the interaction between the stones and chakras will return the chakra into healthy vibration, therefore healing the part of the body affected. When removing the stones, always remove the highest one first, leaving the lowest stone last. 1. 2. 3. 4. 5. 6. 7. Home

Cleansing Negative Energies From Our Space ~ Keeping Our Homes High Vibrational Our homes are our sacred space where we retreat and replenish our souls from the outside world. However, they can also be a breeding ground for negative emotional energies from previous owners or from ourselves, families and friends. Everything is energy. However, no ones home is always high vibrational. So I want to talk about how to clear negative unwanted energies in our environment that we have created ourselves, negative energy that has been projected onto us or negative energy that has been brought in from another soul mate. 1. Aura: Start at the bottom of your feet and move up the body all the way to the top of the head. " I command all negative energy to leave my space and Divine Love and Grace to be put in its place." Home or Work Space: Open windows to escort the stagnant energy out into the sun to be transmuted. 2. 3. 4. 5. 6. Command for all negative energies, entities, emotions, thought forms, illnesses & viruses to be sent to Gods light to be transmuted into Love. 7.

Reiki Symbols The Japanese Character of Reiki In Second and Master level of Reiki you will have access to the Special Sacred Reiki Symbols and words. These are handed down from Master to Master and are used for attuning other initiates into your Reiki Linage. But more importantly they can be used for healing and protection. Reiki Symbols are means of focusing your attention in order to connect with "specific" healing frequencies. Using different symbols will boost up the Reiki energy. Pronunciation "choh-koo-ray" Alias: "The Power Symbol" Meaning: "God and Man Coming Together" or "I have the key" The primary use of this Symbol is to increase Reiki power. Make the sign over the client (or yourself) and say (silently) the words Cho Ku Rei 3 times. It is the all-purpose symbol. * For on the spot treatments * To cleans negative energies * Spiritual protection * On food, water, medicine, herbs * In sick rooms and hospitals * To aid manifestation * To empower other Reiki Symbols Pronunciation: say-hay-key * Cleansing

Family tree of the Greek gods Key: The essential Olympians' names are given in bold font. See also List of Greek mythological figures Notes External links Media related to Family trees of Greek mythology at Wikimedia Commons Chakra balancing healing Chakras are Entry Gates of the Aura. Within the physical body resides a body double, a spiritual body, that contains the Chakras. The word Chakra in Sanscrit translates to wheel or disc. They are centres of activity that receives, assimilates and expresses life force energy. They are responsible for the person's physical, mental, and spiritual functions. They absorb and transmit energies to and from the universe, nature, celestial entities, from people even from things. According to the traditional writings there are 88,000 chakras in the human body covering basically every area in the body. The most significant ones are the Seven Main Chakras located along the central line of the body, from the base of the spine to the top of the head. To see the picture of the Chakra System click here. Watch this beautiful video presentation about the energy centers. The chakras are constantly rotating and vibrating. The activities in the them influence our: What blocks a chakra? The Balanced System Home Page