How to Decalcify and Detoxify the Pineal Gland 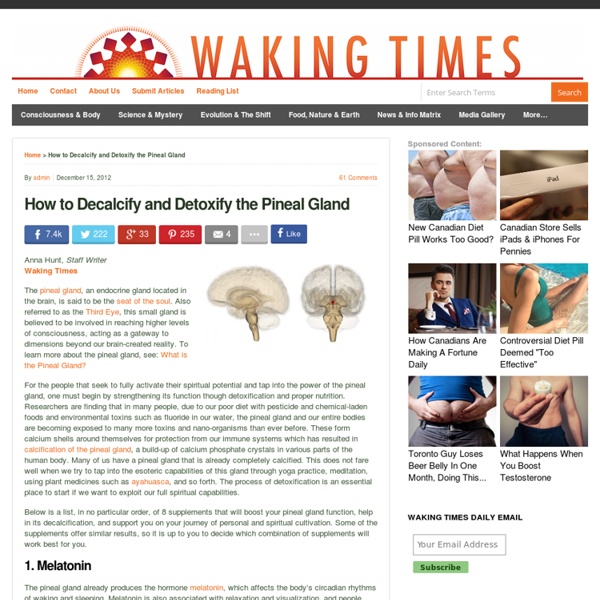 Anna Hunt, Staff WriterWaking Times The pineal gland, an endocrine gland located in the brain, is said to be the seat of the soul. Also referred to as the Third Eye, this small gland is believed to be involved in reaching higher levels of consciousness, acting as a gateway to dimensions beyond our brain-created reality. To learn more about the pineal gland, see: What is the Pineal Gland? For the people that seek to fully activate their spiritual potential and tap into the power of the pineal gland, one must begin by strengthening its function though detoxification and proper nutrition. Researchers are finding that in many people, due to our poor diet with pesticide and chemical-laden foods and environmental toxins such as fluoride in our water, the pineal gland and our entire bodies are becoming exposed to many more toxins and nano-organisms than ever before. 1. The pineal gland already produces the hormone melatonin, which affects the body’s circadian rhythms of waking and sleeping. 2.

Opening The Third Eye - Spiritual.com.au Please read all of the following if you wish to perform this ‘opening the third eye’ exercise. You need to understand what you will be doing. It is important to follow the instructions as this is very advanced: Opening the Third Eye is directly related to the 6th chakra; the psychic chakra, located on the middle of the forehead above the brows. It is closely associated with the “pineal” gland. The pineal gland id dormant in most people,as is the true 3rd eye. Remove Toxic Heavy Metals from Your Body in Less Than 7 Hours The safe removal of heavy metals is becoming one of the modern world’s biggest health issues. Heavy metals surround us; chemtrails, vaccinations, air and water pollution, living or working near a smelter or mine, dental fillings and of course, the kingpin of all, fluoridated water. Hydrofluosilicic acid, the chemical often used to fluoridate drinking water, is an industrial waste that contains lead, mercury, cadmium, arsenic, aluminum, benzene and radioactive waste material. A fact that boggles the mind and poses the question… How did we let this end up in our water? Heavy metals poisoning

Human Cells have Electric Fields as Powerful as Lighting Bolts -A Galaxy Insight Using newly developed voltage-sensitive nanoparticles, researchers have found that the previously unknown electric fields inside of cells are as strong, or stronger, as those produced in lightning bolts. Previously, it has only been possible to measure electric fields across cell membranes, not within the main bulk of cells, so scientists didn't even know cells had an internal electric field. This discovery is a surprising twist for cell researchers. Scientists don't know what causes these incredibly strong fields or why they' are there. But now using new nanotools, such as voltage-sensitive dyes, they can start to measure them at least. Researchers believe they may be able to learn more about disease states, such as cancer, by studying these minute, but powerful electric fields.

The Facts About Fluoride & Human Intelligence Michael Connett, Esq, Fluoride Action NetworkWaking Times In the initial version of this article, we estimated that “over 200,000″ Americans drink water with 1.8 to 2.0 ppm. Based on data from the National Research Council, however, it appears that a more accurate estimate is “about 600,000.” We have changed our estimate accordingly. In July, a team of Harvard and Chinese scientists published a study that warned of fluoride’s potential to reduce human intelligence. The researchers issued their warning after reviewing dozens of studies from the past two decades that have linked elevated fluoride exposure to reduced IQ in children.

Rapid Detoxification of the Third Eye (Pineal Gland) By Estella Hoad | Rise Earth — I mentioned earlier in my post about Pre-Cleansing and Intent Setting, one of my goals is to detoxify and decalcify my Pineal Gland. I want to share this information because it is something that has completely inspired me. Here’s a little bit of background first!

Portland Readies to Vote on Water Fluoridation By Dr. Mercola Water fluoridation is considered one of the most notable advancements in public health, and cities around the US spend millions adding fluoride to communal water supplies each year. But, as stated in the video above, 99 percent of that fluoridated water ends up on your lawn and in your toilet, where it’s really nothing but an environmental pollutant. Then there’s the issue of safety when ingested on a daily basis... An increasing number of dentists and scientists are raising serious concerns about these chemicals, which by the way have never been approved by the Food and Drug Administration (FDA) — the agency responsible for food and drug safety.